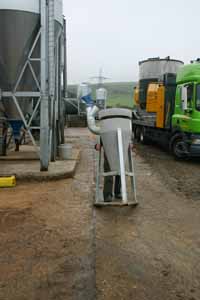 Simple and affordable technology has helped a Dorset pig farmer save feed and improve biosecurity, as Sarah Trickett reports

Whether we like it or not, the ups and downs of feed prices is one area that remains outside of every farmer’s control. And, according to figures from BPEX, farmers wasting 5% of feed could be losing up to £5,000 a year on a 500-sow unit or up to £20,000 when finishers are included – losses that, if reduced, could offset rising feed costs.

But for Dorset pig farmer Robert Lasseter, the loss of feed from dust expelled during the filling of his feed bins has become only too evident since installing a cyclone dust collector.

The technology, which attaches to the exhaust pipe on the feed bin to collect dust during filling, collects 20-40kg for every four tonnes of feed blown into the bin – an amount that soon adds up, says Mr Lasseter, who manages 150 sows near Weymouth, Dorset.

This means if diets average £250/t or 25p/kg and given an average feed saving of up to 40kg for every bin blow, that equates to a saving of £10 every time the bin is filled – a saving Mr Lasseter didn’t expect from a piece of equipment that only cost £700.

“This means with 10 bins on the farm, which are filled every 10 days, the pay back period is 70 days or 70 bin blows. I just can’t believe how good it has been,” he says. Feed collected in the cyclone is then emptied immediately after in to a hopper.

But the feed saving was a secondary benefit for Mr Lasseter, who first saw the cyclone while on a visit to Germany. “The main reason we invested in it was biosecurity,” he says.

“We run a closed indoor herd and with badgers and potentially TB in close proximity we were keen to reduce the incentive for badgers to come on to farm by restricting the food source. The same also applies with birds coming on to farm and salmonella,” he says. Now there is no dust lying by the feed bins, with Mr Lasseter reporting less badgers visiting the farm.

However, the cyclone does take a bit of managing, particularly as Mr Lasseter uses one cyclone between all 10 of his feed bins. “The advice from the manufacturer is to have one cyclone for every feed bin. However, when you have 10 feed bins the cost soon escalates from £700 to £7,000. Instead, we move the cyclone from bin to bin. This does take two people to move it and set it up, but that is not a problem,” he says.

This is a piece of equipment Mr Lasseter says requires little thought when investing in it. “The feed saving we get is 20-40kg but, depending who is filling your bins, the loss of feed from dust could be more when the delivery speed is increased. This doesn’t take in to account the biosecurity benefits either.”

• Improved biosecurity by reducing food source for badgers and birds