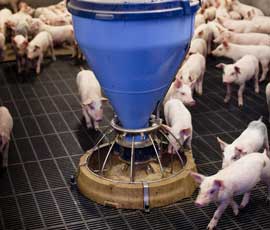 The pig industry will face continued challenges in 2012 but begin to grow during 2013 as improved productivity gains kick in, was the message at Livestock 2012.

Feed prices are still the biggest issue for the pig industry with short term effects already being seen in increased slaughterings. Pig slaughterings reached the highest level in almost 10 years during 2011, and could reach the 10 million head mark during 2012, before dropping back in 2013.

“Producers have been finishing pigs at lighter weights in order to keep costs down,” said Stephen Howarth, senior analyst at BPEX. “The true challenge for the industry in the long term is increasing productivity to mitigate feed prices.

“The UK is behind some of the leading countries for efficiency measures, such as Denmark and the Netherlands, but these tend to have more intensive units.”

Despite lighter carcases, the UK is still producing around the same amount of meat as numbers are up, but this may not continue, said Mr Howarth.

In the long term, producers will reduce pig numbers and some will leave the industry, he said, which we are already starting to see.

Growth is expected to continue and productivity is predicted to reach 23 pigs slaughtered per sow per year by 2020.

See more on livestock on our Livestock 2012 page