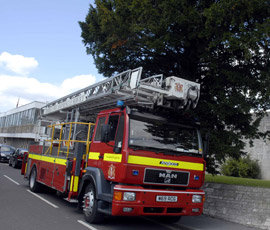 Police are investigating the cause of a fire that severely damaged part of Hatherleigh livestock market in Devon.

A sheep sale due to take place at the market has been cancelled.

Upon arrival, fire crews requested a further two fire appliances from North Tawton and Torrington as well as the incident command vehicle with a supporting fire appliance from Ilfracombe.

Fire crews battled the blaze wearing breathing equipment, using water from a nearby river and an aerial ladder platform from Barnstaple and Western Power.

Some 8% of the buildings were described as well alight at 4.08am. They included the livestock market roof and offices.

Fire crews managed to contain the blaze. Good and steady progress was made, with the fire contained to one corner section of a building at 5am.

The fire was extinguished by 5.38am. The electricity supply was disconnected to allow progress into the affected building.

“The cause of the fire is still under investigation by the fire service and police.”

The incident is the second fire within a week to affect farming businesses.

It is not known when the Droitwich Spa dairy will be reopened due to the effect of the fire on some of the facility’s systems.