Showgoers were delighted at the Royal Ulster Agricultural Society Balmoral Show on Friday (18 May) when the dairy interbreed championship went to a Dairy Shorthorn.

Never before in Balmoral’s 150 years has the feat been achieved by the breed, but judge and Ayrshire breeder Lisa Window-Walker, Hunnington herd, Bromsgrove, was won over by the “outstanding” cow.

This Shorthorn triumph follows last year’s disappointment when the Dairy Shorthorn classes were cancelled due to several breeders being under TB-lockdown. 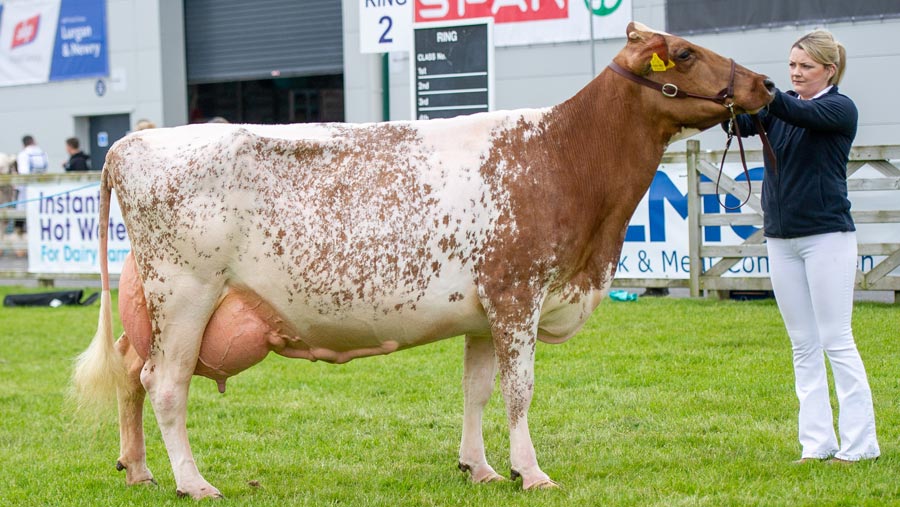 Ballytrain Bloom 30th is the only Dairy Shorthorn to win the diary interbreed title at the Balmoral Show. © James Lande

Ballytrain Bloom 30th, from a home-bred family, is by Brieryside Golden Sand and out of Ballytrain Laura 5th.

She was described as “so open, so deep and dairy throughout” with such width of rear udder.

The champion was shown by Georgia Kerr and bred by James Lambe, Castleblaney, County Monaghan, who knew he had something special after winning at Tullamore show last year.

“I’ve never shown at Balmoral before because I didn’t think I ever had anything quite good enough but I knew she was,” said Mr Lambe. “She’s the best cow I’ve ever owned.”

The Fleming family, Downpatrick, County Down, continued a run of Balmoral success with Cornish-bred third calver Quintrell Kyros Indigo, who goes back to the Comerica family.

She was bred by Mike, Claire and Jenny Colwell in their spring-calving Jersey herd at Glyn Crest Farm, Redruth. The Flemings bought her when visiting Cornwall and saw her out grazing in a field.

She is by Sunset Canyon Kyros and out of Quintrell Comerica Cerulean and from 11 generations of VG and EX cows.

She calved four weeks and is giving just over 40 litres, and is still to be recorded.