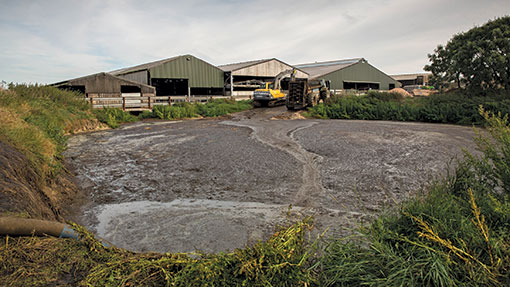 The relentless rain in one of the wettest winters followed by the wet spring of 2014 which prevented slurry tankers getting onto fields resulted in many full slurry stores.

This created a headache for many farmers, especially those in nitrate vulnerable zones who are required to have five months’ storage capacity.

And with experts predicting wetter winters because of climate change, expanding storage or exploring ways to reduce the volume is becoming a priority.

But what are the options and the pros and cons of each? Here we ask a range of experts and farmers who outline five different options.

Putting a roof over the cow feeding area has reduced slurry volume by 1.5million litres – about one-and-a-half times the capacity of one Devon farmer’s lagoon.

At Taylor’s Down Farm in Devon, Alistair Vanstone (pictured below) invested £56,000 in measures to protect his herd of 180 high-yielding Holsteins from the rain and to decrease the volume of waste destined for his slurry lagoon.

The farm is located on the edge of Dartmoor where the average annual rainfall is 1,520mm. During wet periods, Mr Vanstone’s cows would eat less and also wasted feed so he decided to cover the 1,035sq m feeding area.

Mr Vanstone can now divert the rainwater that falls onto the shed into local watercourses. Previously, because the rainwater landed on to a dirty yard, it was stored in his slurry lagoon.

Managing slurry and dirty water had been a key issue and, because the farm in on a slope. It would have been costly to expand the slurry pit capacity from the existing 1m litres.

By keeping as much clean water as possible out of the slurry system, the pit does not need to be emptied as often and the slurry is more valuable as a fertiliser.

Mr Vanstone has also fitted gutters and downspouts on all buildings to divert rainwater away from the slurry system. This saves over 5m litres of clean water from entering the dirty water system.

“I have calculated the amount of clean water we are now capturing is as much as one-and-a-half times the volume of the lagoon. This was water we previously had to cart around the countryside, water that had diluted the value of our slurry,” he says.

He estimates roofing the yard has saved him £1,400 a year in spreading and irrigation costs, most noticeably reducing feed wastage, while the fitting of gutters and downspouts to all buildings saved a further £4,750.

He spent £26,000 to roof the feed area, but other work associated with the project, including laying concrete, increased the total cost to £56,000.

He calculates that the investment has a 10-year payback, but adds there are benefits in addition to reducing slurry volume.

Slurry stores can be expensive to build, but the cost can be lowered if combined with strategies to reduce the volume of material that enters a store, especially water.

Other factors that influence the type of store and associated costs are the site and the layout of the farm buildings, according to Aled Roberts, senior consultant at Adas.

At between £12-16/cu m, an earth bank lagoon is the cheapest option, but this is not suitable for all farms. Much depends on the soil type, the water table and whether there are ground water springs.

For an unlined lagoon, to achieve impermeability soil must have a minimum clay content of 22-30%. “A series of soil tests must be undertaken to establish the permeability of the land,” Mr Roberts says.

Alternatives include lining the lagoon, which would add £7-9/cu m to the cost, or a concrete wall store which, at between £57-60/cu m, costs significantly more.

Another option is a vitreous enamel store which carries an approximate price tag of £42-47/cu m.

Whatever the system, there must be capacity for a minimum of four months storage or, if a farm is in a nitrate vulnerable zone (NVZ), five months.

There must be calculations proving there is adequate capacity to comply with the silage, agricultural fuel oil and slurry regulations and NVZ rules for farms in those zones, together with sufficient volume for rainfall and a freeboard – the gap between the slurry and the top of the store.

“Earth bank constructions need a freeboard of 75cm to allow for additional capacity when there is extra pressure during periods of high rainfall. For a concrete wall store that freeboard must be 30cm,” Mr Roberts explains.

Planning consents depend on the size of the construction. “In Wales, before any work is carried out, we encourage farmers to get in touch with Natural Resources Wales (NRW),” says Mr Roberts. “In England, it would be the Environment Agency or their equivalents for farmers in Scotland and Northern Ireland.”

Under The Control of Pollution (Silage, Agricultural Fuel Oil and Slurry) Regulations, those regulatory bodies must be notified in writing at least 14 days before a new or significantly expanded slurry store is to be used.

“In Wales, any new store must be passed by NRW at least two weeks before it is used so the advice is to get in touch well in advance,” says Mr Roberts. “If planning has been applied for then they should already be aware of the development.”

Most systems need either full planning permission, or approval under the “prior notification” system.

If the work constitutes “permitted development”, the local authority must be asked whether prior approval is needed for the location, design and external appearance.

When this is the case, a plan and written description must supplied and a fee will be payable. A large development will need full planning approval and the fees will be higher.

Mr Roberts strongly advises farmers to ensure a qualified structural engineer designs all systems. That engineer should sign off the facility before it is used.

“Make sure the facilities comply with the British standard, BS5502. If there is no engineer’s certificate and, for example the wall breaks, the farmer will be liable,” he says.

Separating solids from liquid can reduce storage requirements by up to 15% – the equivalent of a month’s storage on some systems.

“Taking the solids out gives farmers an advantage in how they handle it,” he says.

“The liquid slurry is easier to handle, it can be pumped more easily by irrigation or soil injection equipment and pipe networks are less likely to block. Pumping horsepower is reduced and pumping distances can be increased.”

This approach, suggests Mr Hamilton, is ideal for enterprises with off-lying land.

“You can cart the solids to the outlying land, but you don’t have to take the liquid, which accounts for the volume in slurry,” he says.

“The solids can be more easily transported by trailer, and spread on fields remote from the farm.

They can be stored more easily with less of an odour problem.”

The manure solids retain higher concentrations of elements such as phosphorus, therefore reducing the risk of nutrient overload to land regularly irrigated with liquid slurry.

The interval between cleaning and sludge removal can be extended and there is a reduction in the maintenance and renewal requirement of the storage tank.

“Smaller machines are also now available so that separation is a viable investment for any unit of more than 200 cows,” adds Mr Hamilton.

Start-up costs of installing an on-farm anaerobic digester can be high, but these plants can be a valuable means of recycling slurry as a premium biofertiliser.

The anaerobic digester at Richard Tomlinson’s Lodge Farm, near Wrexham, manages slurry produced by the organic dairy farm, which is fed into the digester and the resultant liquid and solid digestate is spread on to the land.

The farm doesn’t purchase any additional soil conditioners – all of the fertiliser requirement is provided by digester.

A separate lagoon was incorporated within the farm’s larger storage lagoon to store the slurry and to pump it underground every fortnight to the digester half a mile away.

This means the slurry doesn’t have to be transported across the land or by road.

“Current daily inputs are 30t of cow slurry together with 6t of chicken manure from a local broiler unit,” explains Mr Tomlinson.

All the digestate passes through a separator and the resulting by-product is useful as a farm fertiliser.

The liquid is stored in a lagoon that has six-months storage capacity and is injected into the grassland.

A suitable exemption or an environmental permit is needed, depending on the size of the processing facility and the feedstock.

The regulatory body depends on where the farm is. In England, the Environment Agency is the primary regulator while in Scotland it is the Scottish Environmental Protection Agency (SEPA).

In Wales, Natural Resources Wales is responsible for regulation.

Retrofitting slatted flooring in areas of high slurry build up, such as the passageways of cubicle housing, will provide additional storage, but comes with a high-price tag.

But these systems are not used widely, he adds, because the cost is high compared with other storage options, whether the slats are fitted to existing buildings or to new developments.

“The capital cost when you compare it to a slurry lagoon is high, especially when the slats are being retrofitted because it means ripping up existing concrete and replacing it,” says Mr Davies.

He believes slats have a more significant role to play in new dairy cow buildings as a means of easing slurry storage pressures.

Slats eliminate slurry pooling, but there can be a build up of slurry in certain areas, such as at the back of cubicles, therefore, manual scraping would be required.