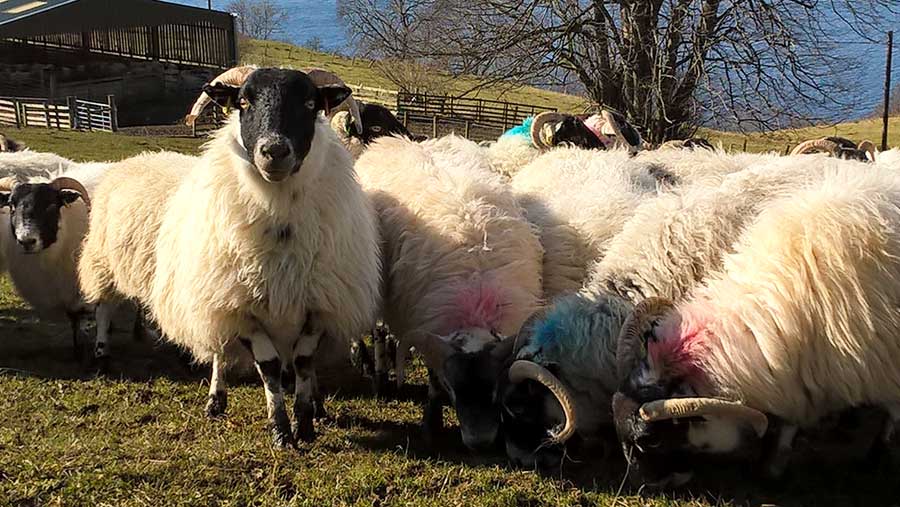 Enormous genetic gains have been reported on a Perthshire hill farm since the leap was taken to performance record its Scottish Blackface flock.

The pure flock at Wester Tullich, Aberfeldy, were well below the breed’s genetic average back in 1999, but by selecting stock on growth traits, maternal ability and high-index figures Ian Duncan Millar and shepherd Mark Armstrong have seen the farm’s best progeny rise to the top 1% of the breed.

The genetic gains means lambs, which are fattened on kale at the Duncan Millar’s lowland farm, Tirinie, sold three weeks earlier. With finishing costs about £1.20 a head a week, this is saving more than £1,300 on lamb production costs.

The upland system in place at Wester Tullich pushes the flock to maximise what they can from the available herbage available on the north-facing foothills of Meall nan Oighreag.

All land is less favoured area, but is still “a green hill”, with little bracken or heather. Single bearing ewes lamb at 400m and then graze up to 760m.

“Performance recording has enabled us to identify the individuals and families that specifically thrive on that ground,” says Mr Duncan Millar, who stresses he is recording entirely for his own purposes.

“I don’t look to sell tups; the market is not there for us to do that – we sell about half a dozen tups a year. This is about identifying good stock we would otherwise miss and matching them appropriately to our system and increasing profitability – this farm has to stack up.”

Ahead of tupping, Signet data is analysed. A good-looking tup with a strong index but low muscle depth can be put to ewes with high muscle depth, he explains.

“It’s a management tool we use; balancing the performance records with sheep that look right and are structurally sound, and this year we are happy to see our top-ranked tup on the figures is also a good-looking strong sheep, which has not always been the case over the 16 years.”

The sheep pen now operates its second performance recording rig, consisting of weighing scales, EID-reading equipment and a computer-operated auto-drafter that can split sheep according to age, pregnancy and any data held by the computer, explains Mr Armstrong.

A typical year sees up to 200 replacements introduced to the flock after being wintered on lowland ground near Stranraer weighing 51kg. This is a marked improvement on the 38.5kgs in 1999, when Mr Duncan Millar became conscious of slow growth rates in replacement females.

“Subsequently gimmers now go on to the hills averaging 12.5kg more now than in 2000, meaning they have less growing to do on the hill and should be fit to do their job,” says Mr Duncan Millar.

The flock was fitted with EID tags in 2000 and 200 ewes were selected and recorded. The bottom 50 were cleared out and a further 50 were brought in from the flock each year until a nucleus flock was reached in 2004.

“It was in 2004 when we went for it,” says Mr Duncan Millar, who places great importance on maternal ability and eight-week growth rate.

“When numbers come back from Signet the first thing I look at is the overall index, this is important, and in terms of individual attributes, the mothering ability and milkiness of ewes is vital, so I look to eight-week weight.

“Like anything in breeding, if you focus on one attribute like mature size for example, you can get there very quickly but you lose some other key traits.”

Mr Armstrong says his job has changed from lambing sheep to being a “data gatherer”.

He has developed techniques to cope with the extra work involved when lambing on the hills. “A keen eye is needed when dealing with gimmers and first-crop lambs,” warns Mr Armstrong, who aims to weigh new-born lambs as soon as they’ve found their feet and started sucking.

“Ideally you don’t want to leave it longer than a day before doing this and easy-read tags comprising just the last three digits mean identifying wandering mothers is simple.”

Tag colours vary according to year and make matching mothers and lambs and data gathering much easier, with orange and yellow the easiest to read at distance.

“We have other colours such as green and pink for different years but ideally the larger tags with large numbers on can be seen on the quad from 10m away,” explains Mr Armstrong.

Occasionally, technology fails and for this reason there are contingency plans, namely; carrying pocketbooks and pencils and penning “non-reads” for later identification.