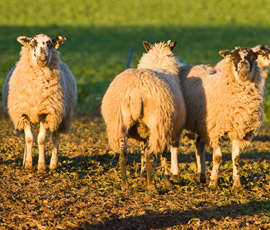 Scottish livestock farmers are being urged to tackle an alarming increase in liver fluke incidence in the nation’s cattle and sheep.

The warning comes after figures for liver rejection were released by the Food Standards Agency (FSA) confirming Scotland has the highest incidence of liver fluke in the UK.

The incidence of liver fluke in cattle at abattoirs has risen by more than 6% to 17.24% for the first quarter of 2012, compared to the same period last year.

NFUS says the disease is threatening to remove value from the livestock sector in all parts of the food chain, and urged farmers to tackle the threat of liver fluke “head on”.

Speaking after an FSA Scotland meeting on Wednesday (24 April), NFU Scotland president Nigel Miller said: “Liver fluke is causing a huge degree of loss to Scotland’s livestock sector – both at abattoirs and on farm – and is posing a massive welfare and production challenge for our farmers. It is in everyone’s interests that we tackle the issue of fluke head on.

“Veterinary reports indicate that liver fluke has devastated ewe health in some flocks over the past few months while in cattle, even low levels of infection can pull down performance, slow growth rates and increase days to slaughter.

“This spring presents a window of opportunity for producers, in conjunction with their vets, to tackle the problem on farm.”

Mr Miller said at a recent industry conference that Scottish abattoir operators all expressed concern at the growing cost involved in condemning livers from the food chain because of fluke.

He added one abattoir reported it was struggling to fill customer demand for clean livers because of the disease.