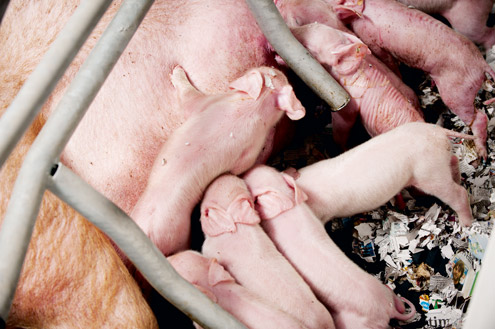 Dutch producers are already achieving an average of 28.5 weaned pigs a sow a year.

However, increased litter size has brought additional challenges that should be noted by British farmers aiming to increase litter size.

In Holland they are on target to wean an average of 32.2 piglets a sow a year by 2020. But it does bring challenges, explained René Bonekamp of Dutch company ForFarmers at a BPEX and BOCM Pauls conference focussed on the Breed+3 programme, which is aimed at helping herds wean an extra three pigs a sow a year.

The aim should be to produce a uniform litter that will be more likely to survive – thus helping to boost the number of pigs weaned a sow a year.

“The basis of a uniform litter is the sow itself and her body condition,” stressed Mr Bonekamp.

Weight loss during lactation also influences the next litter. Research has shown 20% of pigs with the highest weight loss in lactation of more than 13% had the greatest variation in piglet birth weight.

Speaking to Farmers Weekly, Mr Bonekamp said if he had one main message for UK producers it would be to exercise precise feeding and focus on the sow.

“Measure back fat and weight just before farrowing and weaning and at 40 days and 70 days of gestation. You need this information to do precise feeding.”

“Often gilts are fed the same high-energy, high-amino acid gestation diet as sows, but this is based on the sow and the fact she needs to gain weight from the previous farrowing.”

He said there was the opportunity at this stage to feed gilts a different balanced diet with higher amino acids to help the development of the gilt and not fat.

“This will set the gilt up so she is more likely to achieve the target of an extra three pigs weaned a year in the future,” he explained.