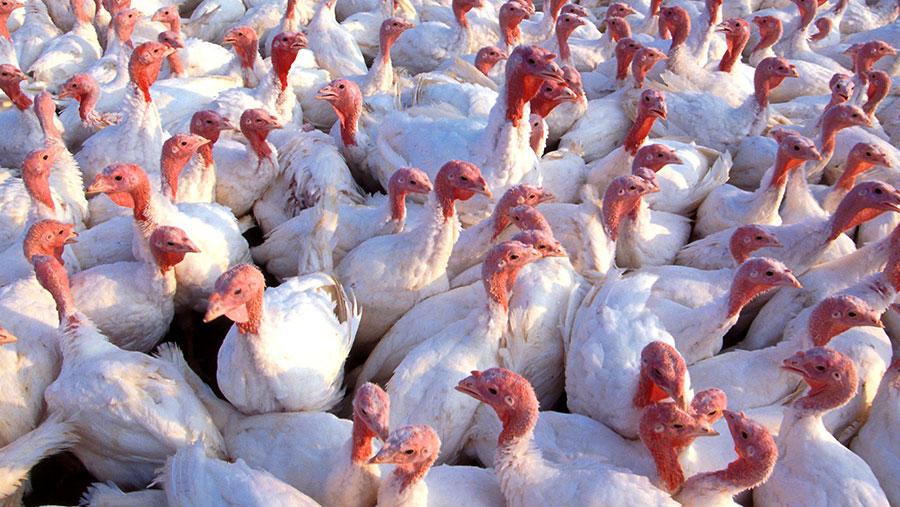 US turkey producers have hit back at claims British consumers could be eating “dirty” Christmas turkey in future, describing the suggestion as “fearmongering” and an attempt to undermine market confidence.

The claims are contained in a report from the UK’s Food Research Collaboration, put together by Tim Lang from the City University of London, Erik Millstone from the University of Sussex and Terry Marsden from Cardiff University.

In their report, the professors say the UK may soon be forced to accept chlorine-treated poultry as part of any future free-trade deal with Washington.

See also: Sector-specific antibiotics targets and what they mean

They warn UK consumers “could be eating ‘dirty’ chlorinated turkey at Christmas if the UK agrees a post-Brexit trade deal with the USA”.

In the USA, it is common practice for poultrymeat to be rinsed before leaving a slaughterhouse with one of four chemical solutions, to eliminate pathogens (see ‘What the report says’ below).

The report says this is to mask poor standards earlier on in the production chain – standards not allowed in the UK.

The researchers also suggest these washes are not fully effective and only eliminate contamination, such as faecal contamination of carcasses, “a bit”.

They also point to “gaps in the available data”, to support the safety of chlorine-containing disinfectants.

And they point to a 2008 New Zealand report which identified the creation of potentially toxic compounds from the reaction of chlorine to poultrymeat.

Prof Millstone said: “The UK should continue to insist on improving hygiene standards in poultry farms, slaughterhouses and meat-cutting plants, and not allow standards to decline, nor try relying on chemical disinfectants to reduce the harm filthy meat can cause.”

But the US National Turkey Federation (NTF) has hit back, branding the claims as a “publicity stunt” and one which could damage all turkey sales.

In particular, the NTF points out the four chemicals involved have already been declared safe by the European Food Safety Authority. And they are used in such diluted form, “they do not affect appearance or taste and, most importantly, have no impact on human health”.

“The fearmongering of this publicity claim is timed to infer this Christmas’ purchases of turkey in the UK,” said NTF president, Joel Brandenberger.

“We are multiple years away from any change in trade arrangements for poultry; certainly, the rules will remain unchanged through the holidays for several years to come.”

Mr Brandenberger said the report added nothing to the scientific discussion about antimicrobial rinses and was merely an attempt to try and influence future trade policy, not public health.

“It would be a shame if the UK’s hard-working poultry producers were caught in the crossfire.”

The report authors, however, fear that, if the UK is forced to accept chlorine-washed poultry as part of any future trade deal, British poultry producers will demand to be allowed to use the same treatment “in the name of a competitive level playing field”.

“The UK government should make an explicit and enduring commitment to maintaining food safety and quality standards at least at current levels,” says the report.

What the report says

What US turkey producers say