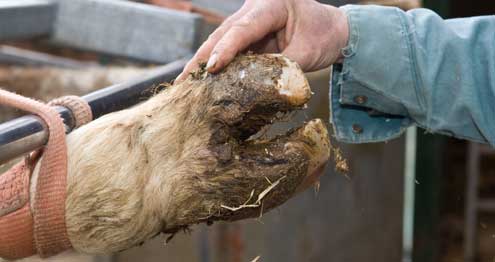 Unfortunately, bad foot-trimming does go on, and we vets often see the results of it – either individual cows with chronic, often incurable problems, or herds with high levels of lameness.

The foot is a complex structure that needs to be the correct shape to function correctly. In a foot that’s an abnormal shape, either due to overgrowth or incorrect trimming, the forces in the foot are changed, resulting in pressure in the wrong places and subsequent lameness.

Figure 2 (below) shows a trimmed foot and at first glance, the shape of the foot doesn’t look bad. However on closer inspection, you’ll notice this shape has been achieved by grinding away the front of the hoof wall.

If you were to look inside the hoof you would see the sole has the correct thickness at the toe, but far too much has been taken away at the heel. Over-trimming at the heel can then lead to a whole sequence of events:.

Consequences of over-trimming the heel

The very thin sole is susceptible to damage and provides very little protection to the underlying sensitive tissues. Bruising and stone penetration are likely.

The whole foot now tilts back, so the skin of the heel is lower, and more likely to come into contact with slurry. The cow is more susceptible to slurry heel or digital dermatitis.

The base of the pedal bone is no longer parallel with the walking surface of the sole. This alters the whole balance of the foot, putting more strain on the tendon at the back of the foot.

At the time of trimming, the over-trimmed heel and all its associated problems are easily ignored; the most noticeable thing is that the angle of the toe is too shallow, so this is easily made to look better by grinding away the front wall of the hoof. The trimmer puts the foot down, happy that he’s created a nicely shaped foot.

However, that is far from the truth as grinding away the front wall has done nothing to correct the balance of the foot, but has made the situation worse by reducing the strength of the weight-bearing hoof wall.

Poor quality trimming can turn a foot from a healthy foot to a disaster waiting to happen.

Figure 5 (below) shows a foot part way through a trim. The inner claw needs no more taking off the sole, other than the “modelling” that will be done at the end.

It’s tempting to pare the whole surface of the sole, to make it look clean and tidy. As the toe is usually harder than the heel, it’s easy to take too much off the heel, particularly when using a grinder.

On this foot, the outer claw is overgrown (as is often the case with cubicle housed cows), so the whole sole will need to be taken down to be level with the inner claw.

Not trimming enough from an overgrown claw can be just as damaging in terms of foot balance as over trimming.

Good foot-trimming requires a thorough understanding of the function and anatomy of cow’s feet. It’s a skill that is best learned by going on a course, followed by plenty of practice to fine-tune technique.

Just “having a go” can cause more harm than good, but done well it can have a dramatic and very positive effect on the health of a herd.