Damian and Meg McNamara decided to start breeding Boer cross goats to give themselves the best chance of growing their own viable livestock business.

Previously they both worked full-time jobs while running a 120-strong herd of Hereford Angus Crosses on Meg’s family farm.

But since launching a goat meat company last year their Moat Goats herd already numbers 170 and expanded again when a further 90 kids were delivered last month. 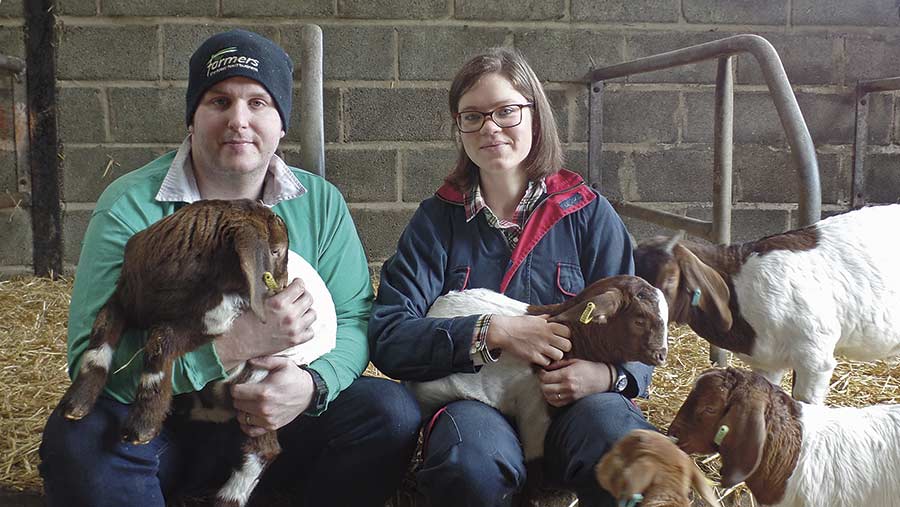 See also: 6 top tips for getting into milking goats

The goat and kid meat is sold direct to customers nationwide but the McNamara’s have big plans to eventually open their own farm shop and will start by attending farmer’s markets.

Previously they were selling weaned calves and stores, depending on TB restrictions.

But the new venture sees their Boer goats finished at five months.

“We charge a premium price as Boer goat meat is a premium and niche market; it is equivalent to a Hereford or Angus of the beef world, as the Boer is bred specifically for meat production – ideally sized, lean, yet tasty.”

How the venture started

The venture came about after Meg, a qualified nurse, and Damian, who works at a local oil refinery, moved back to her family farm in New Moat.

“I’ve always been interested in farming, but never thought I’d have the chance to do it,” she says.

“Mum had a beef herd so we started doing the work for her; the beef was hers, but we were running them while working full-time.

“There was always someone there, but it was hard and not really sustainable. Calving was always a difficult time – if I was here by myself it wasn’t easy if a cow needed to calve, so then we started to think about what we could do, something where it would be OK for just one of us to be here.”

Self-confessed foodies, the couple knew they wanted their own agri-food business and after numerous discussions came up with a plan to breed meat goats after getting a pair as pets.

“I remember going to a local petting farm when I was young – the goats were on the picnic tables and kept stealing sandwiches; I thought they were brilliant. That’s probably why Mum didn’t.

“I suppose I am very contrary – the more she said she didn’t want one, the more I did. We hatched this plan for Damian to go to her with the idea of buying me one, to see if she would go for it and she did.” 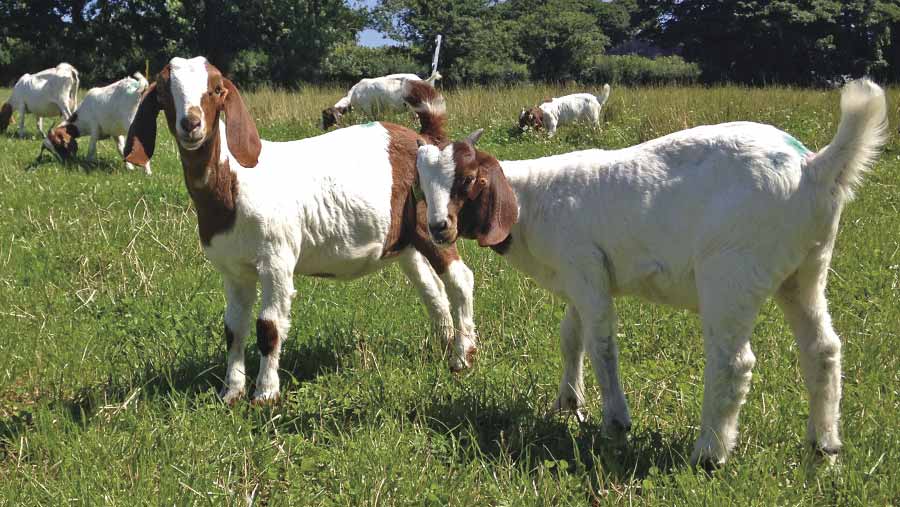 They ended up getting two, Myrtle and Olive – named after plants and flowers like the rest of the herd – who came from a local smallholder.

The couple were smitten and added to their flock before deciding to buy two small herds, each of around 25 goats, to test the waters and see if there was a demand for goat meat.

“They were intended to be pets but we put them to the Billy so we could eat the male kids and keep the females,” says Meg.

“At that point we’d never tried goat meat, although we’d heard a lot about it. It’s quite difficult to source here but the more we have got into it, the more we have found there is a demand for it.

“There was a lot of travelling involved in sourcing the herds – one came from Dorset and another from Norfolk. Boer goats are not particularly rare, but there’s a demand for them and we needed the numbers. We found quality; most are pedigrees, so were prepared to travel for it.”

Compared to other livestock, goats are expensive, with a doe costing around £250, while an unproven Billy is between £600-£700. As well as starting to breed the goats, the couple continued working full-time and running the beef herd.

“It was absolutely manic and that’s when we decided one of us needed to be here full-time, so I left my job last April,” explains Meg.

“It was better for me to leave my contracted post as I have more flexibility. I can still work the occasional shift, whereas Damian’s hours are set in stone, although ideally the best thing would be if he could come and work at home.

“It’s been so much easier kidding them on my own, and if I do have any problems we’ve got a very good vet.”

Last summer they sold the sucklers, retaining 30 steers, which Meg anticipates will also be sold. Compared to other livestock, she says the goats are very different – and more difficult – to look after as they are physical, temperamental, very agile and fussy with their food.

Over the summer the flock was put out to grass with 24-hour access to shelter, while in winter they are housed in sheds.

Their diet consists of non-GM feed – grass and home-made stalky haylage, which has a high dry matter and high sugar content. The kids also get ad lib creep, a compound nut, from a creep feeder and the adults limited concentrates, depending on their condition and how many kids they are carrying.

Goats can often suffer scald (raw skin on their legs) due to wet conditions, although so far this has not been a problem for the Moat herd.

They are also prone to listeria, which the McNamara’s work hard to prevent by avoiding soil contamination by mole trapping, triple wrapping bales and putting an additive on them and making their own haylage as opposed to buying it in.

Unlike sheep and cows, the goats don’t develop proper immunity either, which can leave them susceptible to worms, so Meg has taught herself to carry out faecal egg checks, which she does on a regular basis.

The kids stay with their mothers while they are young and are weaned at 12 weeks, before being sent to slaughter when they reach 40kg. The females are kept to build up the herd.

Goats are slaughtered at a local butcher and packed before being returned to the farm.

“We sell the meat direct from here and customers turn up all the time. We’re quite happy with people dropping by. We have a sign up saying beep your horn, and that seems to work, although most do message to say they’re coming.

“We’ve only been selling the meat since September, so we’re still in the early stages but we’re selling everything we send to slaughter.

Others available include kid sausages, neck of kid and breast of kid or customers can opt for half or a whole kid for £9/kg.

“A lot of our sales are through word of mouth and via Facebook and Instagram. We’re working on a website which should be live soon and I’ll also be on Twitter once I fathom it out.

“We’ve supplied a few butchers and hope to start supplying restaurants as well.

“Around here it’s quite a traditional market; we’re finding a big percentage of the local population are reluctant to try it because they think it has a goaty taste or smell. It doesn’t.”

Meg says the meat has a sweet, nutty, juicy taste, while legs steaks are much beefier.

Some of the more popular cuts include steaks and diced and minced goat.

As for the future Meg is hopeful of building a successful business with ambitions to own the largest herd in the UK.

“We’re quite interested in expanding into charcuterie as well as supplying shops, butchers and restaurants from our own farm shop, and are very hopeful that in five to 10 years’ time we’ll have the biggest meat goat herd in the UK and a really successful business.”