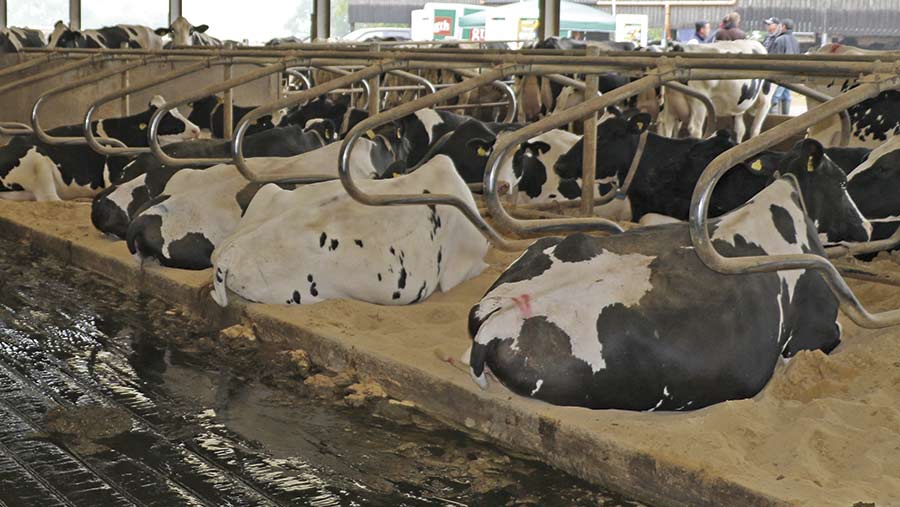 Getting cows to produce average daily yields of 38.5 litres while achieving high levels of fertility is no easy feat.

But it is one the team at Pilsdon Dairy Farm in Bridport, Dorset, are managing by placing an unwavering focus on cow comfort, management and heat detection.

Simon Bugler, who farms in partnership with his parents, Roland and Heather, has seen huge improvements in performance since he stopped grazing and brought his herd indoors full time.

His calving interval has fallen from 420 days to 377 days, pregnancy rates have risen to 26% and yields have swelled from 7,500 litres, all while expanding herd numbers from 340 to 700.

Mr Bugler puts all this down to improved cow welfare, delivered through a state-of-the-art environment, and consistency in which the cows are managed. He believes “fresh air, quality feed and trained staff” are the cornerstones to success.

The pedigree Bettiscombe herd is milked three times a day through a Boumatic 40:40 rapid-exit parlour and is currently averaging 12,282 litres at 3.78% butterfat and 3.15% protein.

Mastitis rates have also been dramatically improved in the past three years by regularly reviewing milking data, captured through the parlour’s SmartDairy technology which measures flow rates and milking times.

He noticed that cows were not being milked out fully: more than 35% of cows had more than 250ml of milk left in their udders.

There were also inconsistencies in the milking routine between the dairy’s six full-time staff.

On Mr Ohnstad’s recommendation, ACR flow settings were reduced from 1,300g/minute to 1,000g/minute to ensure cows were fully milked out, and adjustments were made to the parlour to provide better cluster alignment.

Staff were also given clear protocols to spray, strip, wipe and apply clusters to cows in batches of 10 to ensure they received adequate stimulation prior to cluster attachment.

As a result, mastitis has dropped from more than 30 cases for each 100 cows a year to just 13 cases currently, although the team continues to meet with Mr Ohnstad regularly to look at how mastitis rates can be driven down further.

“It was only successful because everyone bought into it,” he said. “It’s about having a whole-team approach from the milking team, engineers and the vet.”

Speaking at the Gold Cup Open Day at Pilsdon Dairy Farm on 28 June, Mr Ohnstad advised farmers to review milking data regularly and assess their own performance. He said flow rates were key and that a cow should produce more than 40% of her milk in the first two minutes.

He said: “If the average milk flow rate from the group is in the 30s in the first two minutes, then you need to look at your milking routine.

Cubicle management has also been key to reducing mastitis. Environment cleanliness has become even more important in recent years, with about 90% of the herd now dried off with a teat sealant only.

Bactoscan is currently at 10 and cell counts are running under 100,000 cells/ml. Key to achieving this is getting environmental pathogens under control, along with a good milking routine, Mr Bugler said.

All cows are housed on deep, sand-bedded cubicles with some far-off dry cows kept on mattresses and sawdust for ease of management.

Beds are raked at every milking and wide passageways make for good cow comfort. A flood-washing system also ensures alleys are kept slurry-free.

Buying three adjoining parcels of land over the years has now taken the business up to 730 acres owned, which enables the farm to produce all its feed in house.

“We now have the resources to grow all the feed we need and utilise slurry as a fertiliser.”

Cows are fed a TMR once a day, with 50:50 grass silage and maize forming the base of the ration, and no cake offered during milking.

Despite such high yields, fertility is uncompromised, with pregnancy rates averaging 26% and 38-39% holding to first service.

“Pregnancy rate is one of the key things. I get quite disappointed if we see that drop below 25%.”

“Pregnancy rate is one of the key things. I get quite disappointed if we see that drop below 25%.”

Michael Halliwell, from World Wide Sires, said KPIs were something every business should have.

“Assess where you are, where you have been and where you are going and relay that information to the team. It is relevant to them also.”

Mr Bugler takes charge of artificially inseminating cows, alongside herd manager Lawrence Power, but all staff are encouraged to visually detect heats throughout the day.

“It’s about training and getting the team to understand what the bulling cows are, and it creates more interest for them.”

“It’s about training and getting the team to understand what the bulling cows are, and it creates more interest for them.”

All replacements are bred and reared on the farm. Cows are AI’d twice to black-and-white bulls but will be served to beef semen if they come back bulling a third time.

“I look for 600-700kg of milk, positive fat and daughter fertility and low somatic cell counts.”

Sexed semen is used prolifically on the heifers, with the very best animals – bred from the best cow families, with good conformation and parent averages – given a second chance with sexed semen before Angus semen is used. About 80% of the sexed bulls are genomic.

Using sexed semen means the family has surplus heifers to sell each year, and Mr Bugler said this helps with cashflow.

The Buglers are in the process of erecting another cubicle shed and have ambitions to expand.

Mr Bugler believes continuing to growing the business will give his three children more opportunities in the future.