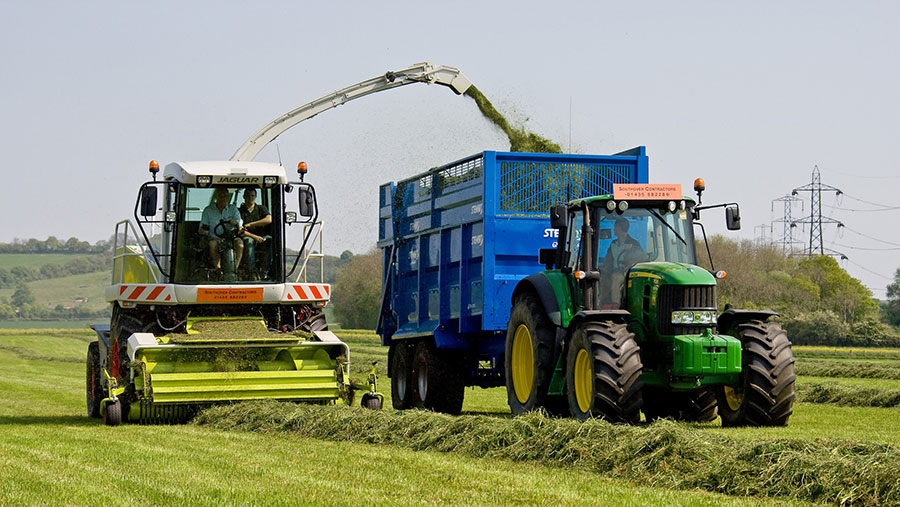 If farmers are serious about increasing the production from forage, they need to minimise losses across the production process, starting with the crop in the field.

Timing of first cut is a crucial decision. Get it right and you will have better quality forage to drive production.

Below she outlines how it can help improve ration quality and what to look for.

See also: How to decide if autumn block calving is right for you

When grass is at its optimum quality in the field before first cut it will have an energy content of about 12.8MJ/kg DM. Yet, when the clamps are opened, silage energy contents will be closer to 10.8MJ, representing a loss of about 16% of the available energy – although this varies from farm to farm.

In part, this will be due to factors at play during silage making, such as respiration losses while the crop is lying in the field and fermentation losses, but in many cases the biggest loss is a direct consequence of cutting grass too late (therefore quality in the field is lower), when it has gone beyond the optimum maturity.

As grass develops the ear stem, it goes through a process of increased lignification which reduces the digestibility of the whole plant and so leads to a decline in energy.

In simple terms, D value typically declines by about three units per week and this leads to a reduction of 0.5MJ in energy content, but the start date and the rate of decline may be faster or slower depending on the season.

2. Use pre-cut testing to guide when to cut

Regular pre-cut analysis can tell a great deal about how the crop is developing and so allow timing of mowing to be more accurately assessed and planned.

Sample at least two fields with different sward characteristics (one established ley and one new seed) by mid-April (although this will be farm dependent).

Assess the results for the four key measures affecting fermentation and feed value.

Pre-cut analysis including neutral detergent fibre content will give a much more precise indication of when to cut grass to achieve the balance between silage quantity, quality and fermentation stability.

One of the problems is grass does not mature at the same rate every year. How it develops will be affected by the conditions over the preceding winter as well as the weather in the run up to first cut.

The graph above shows how neutral detergent fibre (NDF) content in pre-cut grass evolved in 2015, 2016 and 2017 and demonstrates the different pattern between the years.

Monitoring trends is therefore key if cutting dates are to be optimised.