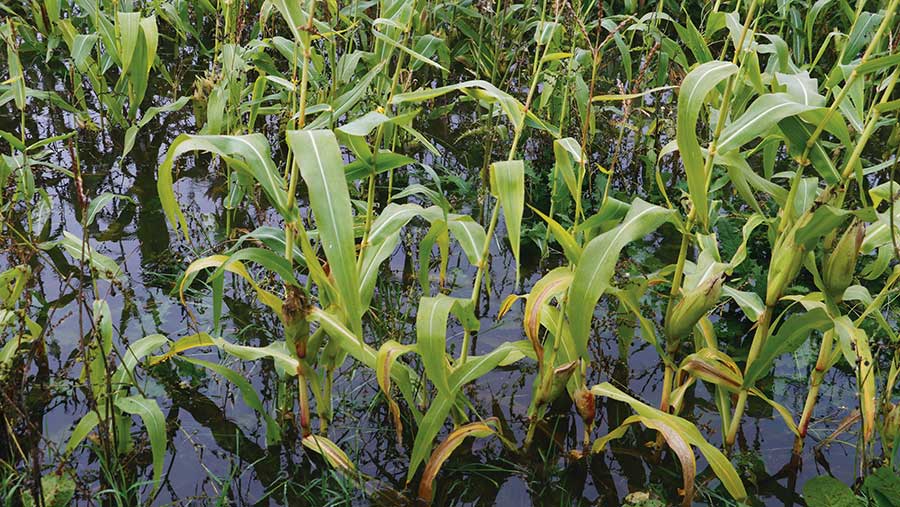 Maize and grassland growers are being advised to test soils following winter floods which have decimated crops.

Grassland advisers are warning that low soil indices are likely due to leaching caused by heavy rainfall.

It is also unlikely growers will be able to apply the usual amount of farmyard manure (FYM) or slurry to fields because wet conditions will have hampered efforts early on in the season.

We speak to four consultants to get advice on how to manage nutrition this spring and bring fields back to life.

Farmers should assess sward and soil condition and in particular check for compaction.

Perennial grass can’t survive for more than two to three weeks submerged under water because it needs air to photosynthesise.

It may come back green as it dries out, but this will mainly be low-productivity annual meadow grass.

If there is less than 60% of sown species in a sward, consider re-seeding (see point three).

“If ever there was a year to get out with a spike aerator this is it, so as soon as you can travel on the land this is the first thing you should think of,” adds Dr Fisher.

Land destined for maize should have a N-Min test carried out, prior to any nutrient applications to assess nitrogen levels.

If farmers have managed to apply farmyard manure or slurry in recent weeks, they can’t assume nutrients are still there, warns Dr Fisher.

Equally, if nothing has been applied, it is essential farmers know what N is left in the soil, as this will guide application rates and long-term nutrient plans.

“This is not the year for guesswork, particularly with the amount of water standing in fields,” says Dr Fisher.

Testing for N levels is impractical on grass fields due to variabilities in temperatures and clover content so basic assumptions will have to be made.

Phosphate and potash should not change because of the weather ­– these hold strong in organic matter – and should be adequate if FYM and slurry has been used in previous years.

The elements that will have been affected by high rainfall are nitrogen, sulphur and calcium.

Many farmers have had grassland under water for weeks, and it’s inevitable that much of this will have died due to anaerobic conditions, says Jim Juby of Horizon Seeds.

Even when water levels have gone down it can take a long time for earthworms, the soil biology and grass to return fully.

The grass that returns will be of very poor nutritional quality, warns Mr Juby.

He advises farmers to rejuvenate damaged swards before first cut by overseeding with grass seed.

“For many people, it won’t be possible to get in with a plough until later in the season. If you can get on land using a small tractor with a light footprint, one option is to use a tined cultivator, spin the grass seed on and roll it in.”

He says an Einbock grass harrow or similar, would be ideal as it would allow operators to carry out all operations in one pass.

“But it does all depend on the condition of your fields. If it’s not too bad in the next few weeks, you should still consider a spring reseed under a cover crop of spring barley, which you could then take for wholecrop in July to boost home-grow feed resources.”

4. Use the right mix

Helen Mathieu from Germinal advises farmers to “top up” newly-established leys using the same mix they re-seeded with originally.

She says adding fast-growing Westerwolds could throw heading dates “out of kilter”.

Although, she says this will have place as a short-term option in older leys, allowing farmers to maximise forage production before they re-seed in the autumn.

“Graze it well at the end of April to early May and stitch in some brassicas. We could be affected with another drought in the summer and a brassica could act as a drought buster. Then, come August/September you can re-seed.”

5. Maize: get muck on early where possible

Wilson Hendry of Grainseed says FYM and slurry should be applied as soon as possible to heavier land and ploughed to get some withering.

But on lighter land he advises growers to leave it until just before drilling.

This will be essential this year. He adds: “We’re seeing soil mineral nitrogen levels in the top part of the soil profile below 5kg N/ha, when normally they would be 25kg N/ha or so, so whatever you can do to get nitrogen on safely will be of great benefit.”