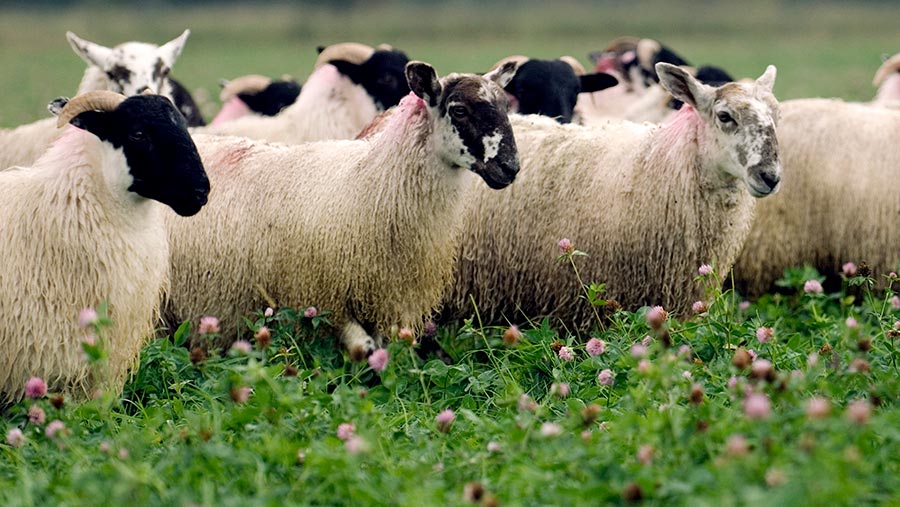 A herbal ley is a diverse sward that includes different grasses and species, with varying rooting depths, properties and drought tolerances.

They have a positive effect on soil health, structure and drainage and usually include nitrogen-fixing legumes, which are high in protein and tannins, and have huge potential for carbon sequestration.

Herbal leys also provide a very rich mineral feed for livestock – the mineral content is much higher than a ryegrass mix and can carry 60% more calcium.

Below, Anthony Ellis and Tom Tolputt from South West Farm Consultants explain how to establish and maintain herbal leys.

See also: Why herbal leys have been added to arable rotation trial

Advice on choosing the mix

You must build the mix to suit your soil type and what you want to achieve.

Perennial ryegrass is the mainstay of most medium- to long-term herbal leys, as it gives the bulk of dry matter, germinates quickly, protects the soil and allows the herbs to establish.

Italian ryegrass is not suitable due to its short-term nature (it generally only lasts two years). It might also outcompete the herbs and can be difficult to grow, especially in hotter conditions.

Other grasses to consider include:

There are a range of different grass, legumes and herbs that can be used. See table below for options.

Herbals leys need little fertilisation; with 30% legumes in the mix, they will be self-sustaining. This means they fit nicely into arable rotations, because they build soil carbon, fix nitrogen and mobilise phosphate for the next crop.

However, they can be tricky to establish. Nothing should be drilled deeper than 1cm and the soil should be rolled for good seed-to-soil contact. If you’re in doubt, roll it again.

Herbal leys are slow to emerge, so undersowing them with 100kg/ha of barley makes a good growing environment.

From an animal nutrition perspective, livestock are very content on herbal leys, but they must be carefully managed.

Livestock naturally select the most palatable plants, so if you’re not careful, they can graze certain species to extinction.

Therefore, it is best to rotationally graze fields rather than set-stock animals to allow it to be grazed evenly and rested.

Ideally, fields should be left empty for 28-35 days to allow for sufficient recovery. This is a slightly longer rotation than ryegrass, but it will provide a lot more nutrition.

It is also important to graze leys lightly in the first year to encourage tillering and prevent plant damage.

He has been growing herbal leys for two years in a field lab trial with the Innovative Farmers programme.

The ley is established with a pea-barley mix in mid-April. Then, once the wholecrop has been harvested, Mr Creek lightly grazes cattle on the crop in September and October.

Close-lying land is in a rotation including four years of a white clover or herbal ley. This is ploughed in the spring and followed by spring wheat or barley.

After harvest, an autumn cover crop of Westerwolds is min-tilled into the soil and is either grazed or cut for silage in the spring.

It is then disced, ready for the pea-barley mix to be undersown and rolled in mid-April.

Offlying land is put down to three years of red clover, then winter wheat, winter oats, and the “Vast and Fast” mix from Cotswold Seeds.

This is followed by another cereal before going back into pea barley mix, undersown with red clover.

“We haven’t measured any specific benefits [to the herbal leys], but the milk yield was maintained when we switched from ryegrass,” says Mr Cheek.

“For two years, we have had drought, and without the herbal ley we would have been in serious trouble.”