A four-year grazing project on heavy land is improving resilience, biodiversity and soil health without reseeding or winter housing.

The aim of the Adaptive Multi-Paddock Grazing Project, running on FAI Farms, Wytham, Oxford, is to test how this grazing system works in practice and share the findings with other farmers.

The term adaptive multi-paddock (Amp) grazing was coined in the US, following a project at Arizona State University that saw an increase in soil carbon of 1% after just one year.

The project at FAI Farms, in collaboration with McDonald’s, follows an earlier trial involving four farms, including 2021 Farmers Weekly Beef Farmers of the Year Aled and Iwan Evans.

See also: How floodplain meadows are central to a regenerative system

“Partway through the project, we could have increased the size of our herd, but we were limited by the capacity of our sheds,” says Silas Hedley-Lawrence, farm manager at FAI Farms. “So, we started looking at the possibility of outwintering.”

Two rivers, the Thames and the Seacourt, flow through the mainly heavy clay soils of the mixed organic farm, and up to half of the land can get flooded during the winter months.

Despite this, all 90 suckler cows, their calves and the herd’s replacement heifers are now being outwintered as part of the four-year project.

The word “adaptive” is key, he says, because the cell size can be changed depending on the amount of grass cover, the needs of the cattle, the weather and even availability of staff.

By changing grazing management, the farm is growing more grass and developing more diverse pastures, without any reseeding.

“It’s down to planned grazing: a short, sharp animal impact and then a long recovery period, so more fragile species can flower and reseed,” he says. 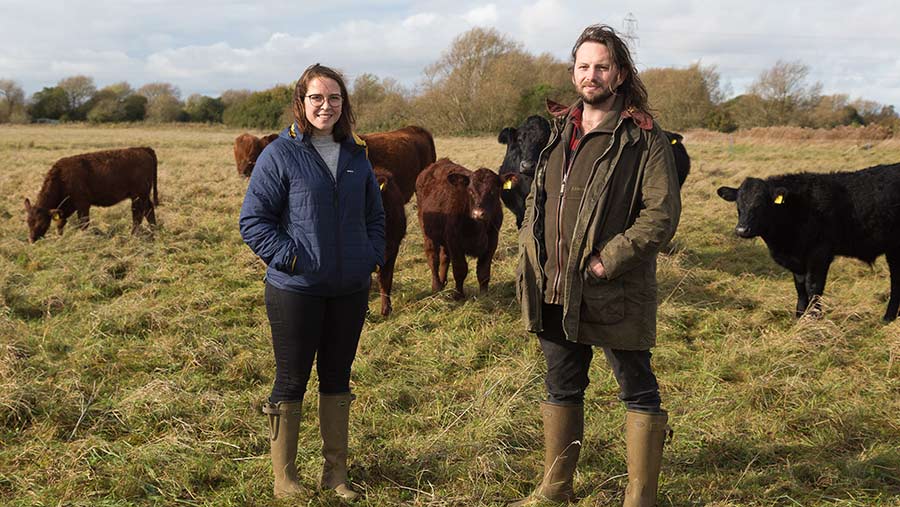 The winter grazing area – permanent pasture on heavy clay parkland in a valley with springs – is divided into 152 one-day grazing cells, with four bales of hay harvested from the floodplain meadows in each cell.

The bales are set out in August, using Agrinet software to guide where each one is placed. The bottom of the valley is grazed first, and further into the winter the cattle move to higher ground, where there is more shelter from trees.

“In August, we decide how much dry matter [DM]/ha we need for winter grazing, factoring in the utilisation rate,” says Mr Hedley-Lawrence.

“We then work out the total requirement based on a 50% utilisation rate and the number of animals in the parkland. Then we know how many 280kg hay bales at 80% DM we need.”

The key is not to graze from 1 August, so that as much pasture as possible is ready for the cattle in winter.

Longer residuals in summer keep the ground cooler, and the resulting dense mat of growth underneath the cattle protects the ground from poaching and keeps it warm in winter, promoting earlier regrowth in the spring.

The hay bales are rolled out as needed to avoid poaching around feeders.

Heavy soils are the main perceived barrier to Amp grazing, says Mr Hedley-Lawrence, with many farmers visiting the project at FAI Farms thinking the system is not suitable for their farm.

Then they see it working on heavy clay and boosting the rate of regeneration, he says.

Labour demand at weekends is now one-quarter what it was when the cattle were housed.

“We can also plan for no moves at weekends, by having a two-day cell, or work with, say, a four-day cell when staff are on annual leave. It’s about making the system work for you.”

Now in the second year of the project, data is being gathered on biodiversity, soil health and livestock.

The average cost a head a day to winter indoors is £2.53, including feed, diesel and labour. The cost of outwintering is 83p – a saving of £40,000/year, without counting machinery depreciation or muckspreading.

The only equipment needed is electric fencing reels and a quad bike. Investment has been made in water infrastructure, and more is planned.

“It’s true that overall, it is less nutritious, but the cattle only graze the nutritious part, the top 40-50%.”

Cattle are currently finished indoors on forage grown as part of the farm’s arable rotation, but the aim is to keep building soil structure to give enough land to outwinter all stock.

“The way we’re managing the environmental side is leading to an increase in production, so we’re not sacrificing one for the other,” says Mr Hedley-Lawrence.

So far, the outwintering area is improving the fastest. One of the fields being monitored as part of the farm’s Savory ecological outcome verification (EOV) – a protocol for land health –  scored in the middle of the criteria in year one of the project.

This year, the field had the second-highest score of any of the nine farms with EOV certification in the country, he says.

Another field, which was previously mossy and full of fescues, had yarrow, oxeye daisies, bird’s-foot trefoil, plantain, vetch, orchids and red and white clover in June and July this year – none of them introduced.

“With changing weather patterns, the ability to increase the soil’s carbon-holding capacity also makes us more resilient and productive.”

Trampling vegetation by cattle is part of the soil mineral cycle, stimulating soil biology and leading to healthier plants and animals, he adds.

The increase in grass growth under Amp grazing has been such that the plan is to double the number of cattle on the farm.

As well as boosting productivity, more animals will accelerate the rate at which the pasture and the soil improve.