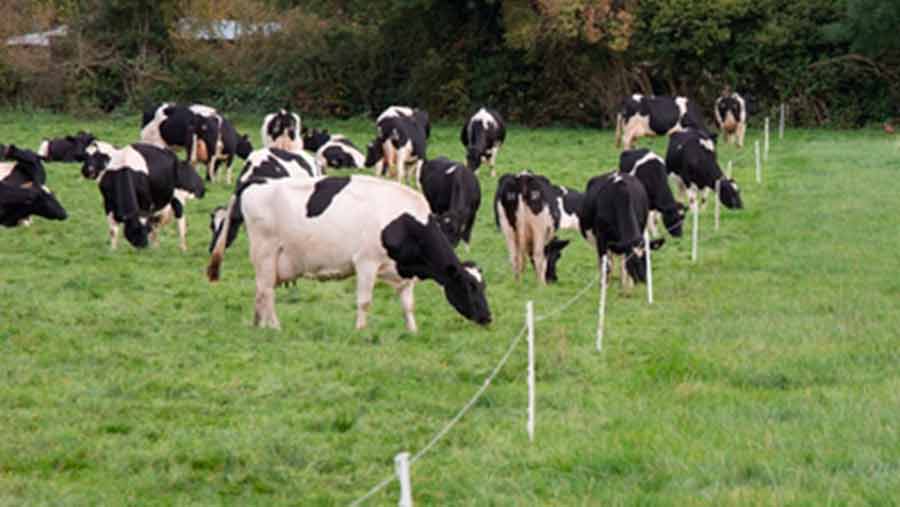 Only two to three percent of grassland in the UK is reseeded. Debbie James looks whether more UK farmers should consider renewing pasture.

Mr Duller is an advocate of spring cultivation and urges farmers to formulate a reseeding policy for this year.

See also: Target fertiliser use on grassland for maximum yields

He says a spring reseed would have less impact on grazing than an autumn reseed because farmers can afford to have fields out of production when they are not short of grazing elsewhere.

“My advice is to get the cultivation done in April and the seeds sown in May. When a field gets established in May there is also an opportunity to deal with weeds before they get established,” says Mr Duller.

“A lot of farmers play on the cautious side and delay reseeding until they have taken a first cut of silage, but that is false economy. They are sacrificing the extra production they would get if the seed was planted earlier.”

Typically poor performing fields will only yield an average of 8t DM/ha at 10.6ME compared to 10t DM/ha at 12ME from a ley in good condition.

The yield from a poor performing ley will cost 10p/kg DM to graze and 17p/kg DM to make silage from compared to 6.5p/kg DM for grazing a ley in good condition and 12p/kg DM for silage.

Charlie Morgan, of independent grassland consultancy GrassMaster, says every farmer should have a reseeding policy.

Although the UK average is much lower, he says the best farmers are reseeding every five to eight years, depending on their system and livestock numbers.

Those that don’t are failing to profit from the genetic potential of modern grass varieties.

“Varieties developed over the last 20 years have increased yields by one to two percent year on year, so if a field hasn’t been reseeded for 10 years the yield disadvantage could be between 10-20%.

“Modern varieties are also extending yields on the shoulders of the season so a reseed can have a longer grazing period.”

Identifying which fields need reseeding is the first step. Many reseeds are done on a diary basis but this is the wrong approach, advises Mr Duller (pictured below).

“Farmers might take the approach that if a field hasn’t been reseeded for 10 years then it needs ploughing, but the chances are that either it doesn’t or it needed doing four or five years ago.

“Measuring flags up poorer performers. If there is a grazing rotation of 21 days and a field takes 28 days to come back into the rotation then that field needs attention.”

If a ley is less than 50% ryegrass, the first question to ask is why. It could be the nutritional status of the soil or compaction.

“The soil is the base line for everything that a field produces, so before money is spent on reseeding the soil conditions and structure need to be adequate to establish that reseed,” says Mr Morgan.

Rejuvenating leys with methods such as direct drilling or stitching in seed can be effective, but both Mr Morgan and Mr Duller agree that if soil conditions are ploughable, there is no better way to establish a quality reseed.

“You can tinker around the edges with oversowing, scratching in seed or aerating but you are never going to get the pristine ley with all its yield and quality benefits as you would with a reseed,” insists Mr Duller.

“With a brand new ley you will get clean grazing and that means a parasite-free pasture.”

He recommends spraying off with glyphosate instead of using selective sprays to target different weed species. “So many of the weeds are the creeping variety such as creeping bent and couch, and glyphosate will deal with these.”

Getting the establishment conditions right is vital. Soil pH needs to be 6-6.5 with phosphate and potash at index 2 to encourage seed to germinate before weeds take hold.

Forward planning is therefore needed. “If you are thinking of reseeding you shouldn’t leave it until two days beforehand to get the lime in. Apply half before and half when ploughing,’’ said Mr Duller.

“A downside of cultivation is that if it is done in a hurry by contractors speeding along with a power harrow and churning everything to dust you will get poor establishment conditions by damaging root channels and killing off worm populations.

“Overworked seed-beds are the biggest problem I come across with reseeds.”

A plough that cultivates at six to seven inches is the ideal depth for a grass ley but with many modern ploughs designed for arable work, reseeds are often incorrectly established at nine to 12 inches.

“If you plough too deeply you will bury all your topsoil and bring up all the nasties, but there is a case for ploughing at eight inches if your compaction layer is seven inches,” says Mr Duller.

Selecting the mixture to suit the system is essential. “The balance of the mixture and what it is designed to do is more important than the variety,” says Mr Morgan.

“Many farmers have changed their systems in the last 10 years. They have perhaps bought in cross-bred cows and are running an extended grazing system but they are trying to make a go of this with their old leys.

“Reseeding is an opportunity to optimise the grass needed for the new system, you can’t do that by scratching seed in.”

Mr Morgan recommends growing a break crop between grass leys to reduce pest and disease issues and to help break down decaying sods. “It also allows an additional opportunity for weed control,” he says.

At Southampton Farm on the Isle of Man, dairy farmers David and Judith Collister have reseeded 57ha of grassland over the last six years.

The farm had been run as a sheep enterprise and the leys had no ryegrass, only wild grasses and clovers.

The Collisters, who farm with Judith’s parents, Colin and Gwen, converted the farm to a dairy unit and their priority was to increase the performance of the fields in the milking platform.

Soil fertility was poor – in many fields the pH was 5 or less and phosphate and potash indices ranged from 0 to 1.

The first step was to improve nutrient status. “We would have wasted time and money reseeding had we not first corrected these deficiencies,” says Mr Collister.

Fields earmarked for reseeding had nutrients applied in the spring – lime was applied at 2t/acre.

Fields were burnt off with glysophate in June and either a green crop of kale, rape or a kale/rape hybrid planted and another tonne of lime added.

“Establishing the green crop broke the sods up and the tap roots opened up the soil,” says Mr Collister, a finalist in the 2014 British Grassland Society’s Grassland Farmer of the Year Awards.

Once grazed, fields were ploughed and a spring cereal drilled. This provided another opportunity to correct nutrient deficiencies further. Cereal crops were harvested as crimped grain in early August and the grass seed sown as quickly as possible thereafter.

The fields have been reseeded with late heading perennial ryegrasses – varieties that score high on digestibility and palatability – and medium leaf white clover to fix nitrogen.

The benefits have been significant. “We are getting bigger yields so we can carry more cows, and the quality is better,” he says.

A third of the herd is autumn calving and the remainder spring calving, which allows the Collisters to get the most from grass during the peak growing months.

“We are stocked at four cows to the hectare from March to June, then we dry off the autumn herd at the end of July. We aim to graze everything; we don’t want to be in a position where we have to cut surplus.”

There are 10ha left to reseed at Southampton Farm and once this is done, direct drilling will be used to rejuvenate pastures if needed in the future.

“Our aim is to be sufficiently stocked so we can’t afford to have grazing fields out of production. Once you are on top of the swards and the soil chemistry is good direct drilling should be sufficient,” he says.