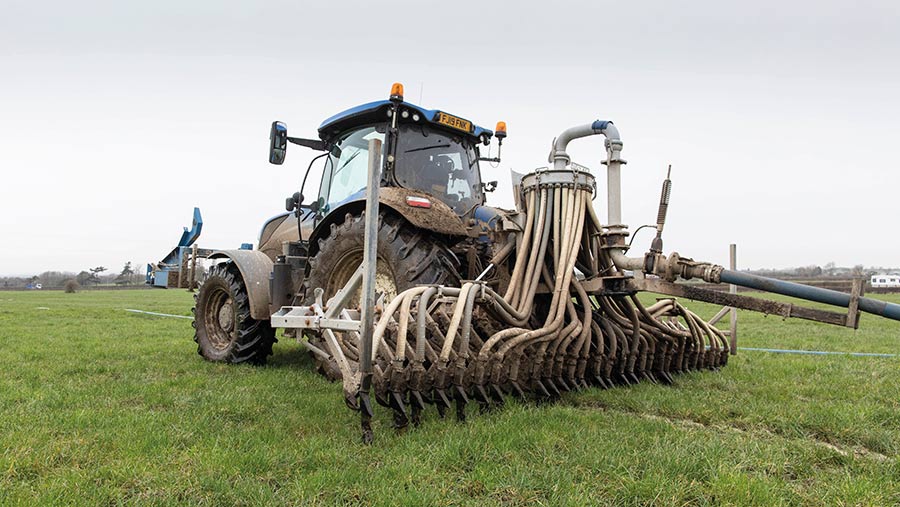 See also: A guide to applying nitrogen on grassland early in the season

With elevated feed costs, increasing milk from forage and days at grass will be priorities on many farms.

This is according to feed and grassland advisor James Bretherton of Agscope, who says rushing onto wet land and compacting it will only slow growth further.

“Compacted soils are colder for longer,” explains Mr Bretherton. “We need soil to be over 6C at a depth of 10cm for the plant to start growing and taking up nutrients.”

He says clients in Lancashire and South Cumbria have reported an average grass growth of 11kg of dry matter (DM)/ha in mid-March. This is well adrift of the 20kg achieved at the same time last year, he adds.

He says farmers should:

Cheshire-based independent fertiliser consultant George Fisher says we are at a critical early stage between soil temperatures being warm enough to grow grass, but not warm enough for mineralisation to start.

Mineralisation – when the soil biology starts cycling nitrogen – typically starts in mid-April, or when soils reach 10C at a depth of 10cm, he adds.

Dr Fisher says an ammonium nitrate fertiliser would offer readily available nitrogen to kickstart grass. But if phosphates were low, a diammonium phosphate (DAP) is beneficial, he adds.

“A 27:10:0 with sulphur will kickstart grass before mineralisation starts in April. About 50kg of N/ha of that type of product will provide 20kg of phosphate/ha to stimulate grass growth,” says Dr Fisher.

Sajjad Awan of CF Fertilisers said a 10:1 response rate from 40kg of N will provide 400kg dry matter of grass. At a fertiliser cost of £275/t, this costs 8p/kg of DM, nearly two-and-a-half times cheaper than concentrate feed.

Dr Awan adds: “Applying 30cu m/ha of cattle slurry at 6% DM surface-applied in early spring before first-cut silage will provide 27kg N/ha. However, according to RB209, 100kg N/ha is required for first cut grass for a potential yield of 10-12tDM/ha.”

This makes ammonium nitrate the best option, along with the fact that it’s more readily available than urea, he adds.