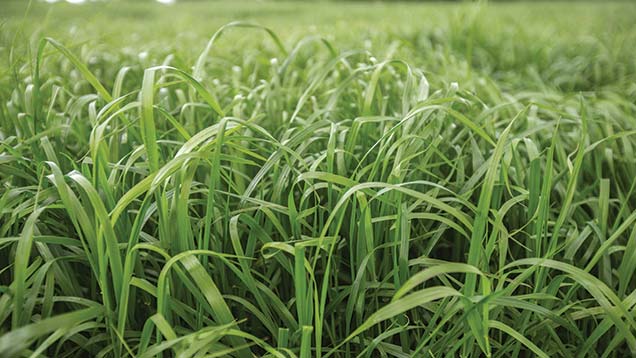 Agrass growth enhancer based on gibberellic acid is accelerating silage production by three weeks at a Devon farm.

Good-quality silage is important to the system at Manor Farm, a 97ha dairy, beef and sheep unit at Kennerleigh, near Crediton. With fields tightly grazed by sheep over the winter, the target date for first cut is traditionally 10 June.

Last year, Ian Pincombe sprayed his 16ha silage block with a growth enhancer. He applied the product on 1 April and his first cut was harvested on 17 May. This had a knock-on benefit for subsequent cuts.

“Our second crop was fit to cut eight weeks later and it meant we were able to squeeze in a third cut, which we don’t normally do. We usually have to buy in some silage to get us through the winter but we didn’t need to, so we made some savings there,’’ says Mr Pincombe.

The product is applied when grass swards start actively growing in the spring. The air temperature needs to be warming up and not likely to fall for seven days.

Adequate moisture is needed, too, and the sward must be good quality. Ideally, it should be applied to grass 10-15cm tall.

Mr Pincombe applied the enhancer with a sprayer he uses on his cereal crops. “Two weeks after you spray the fields look like they have been rolled; they are a mat of green,’’ he reports.

Although he was advised to spray in March, a later application suited his farm better. “We needed to be sure the grass would be fit to cut when we normally get a decent weather window. That might not have been the case if our cutting date was any earlier in May.’’

Mr Pincombe had initially tested the product in 2013, on a single field, and in that instance he applied it in March.

“We hadn’t been prepared for such a good response, the grass grew incredibly well, but it meant that by the time the contractor got here to cut the rest of the silage fields, the grass quality in that field had gone over,’’ he recalls.

“Last year we knew what to expect so we sprayed all the silage fields later and it worked out well. We didn’t analyse the silage but the cows have milked tremendously well off it.’’

The enhancer is applied at 20g/ha together with an adjuvant to improve application characteristics.

It stimulates growth through cell expansion resulting in stem and leaf elongation and is designed to accelerate the growth rate of established rotational and permanent agricultural grassland for about six weeks.

The recommendation that it should be applied to good-quality swards was backed up by Mr Pincombe’s own experience. “It worked better on some leys than others,’’ he says.

Mr Pincombe used the enhancer on silage fields only at Manor Farm so the recommendation that livestock be kept out of treated areas to allow the grass to respond to treatment was not an issue.

For grazing, the product must be applied a minimum of 14 days before turning stock on to the ley, although doing so 28 days before grazing has been shown to maximise the benefit.

At £25/ha, Mr Pincombe believes the level of investment isn’t significant when balanced against the production benefits to his system.

Growth is not only earlier, but he says he is getting heavier crops, too. He estimates his first cut yielded an additional 5t of silage from every 4ha – 20t extra across the entire crop.

“When we were cutting the first cut last year we had to go down two gears on the tractor because the crop was thicker,’’ says Mr Pincombe.

“We’ve got quite a lot of clover in the swards and the leaves were a lot bigger so we were probably getting more protein from the crop, too.’’

A trial conducted at Scotland’s Rural College showed that an application on 28 March allowed the three-cut system to produce nearly 14t/ha more of freshweight grass than untreated fields.

Mr Pincombe runs a herd of British Friesians, selling his milk to Arla. He has seen milk production rise since he started using the enhancer, although he believes good growing conditions were also a factor.

“Cows have produced 200 litres more milk over their lactation but it was a good year for growing silage. It will be interesting to see if we get this level of production if the weather conditions are more challenging this year.’’