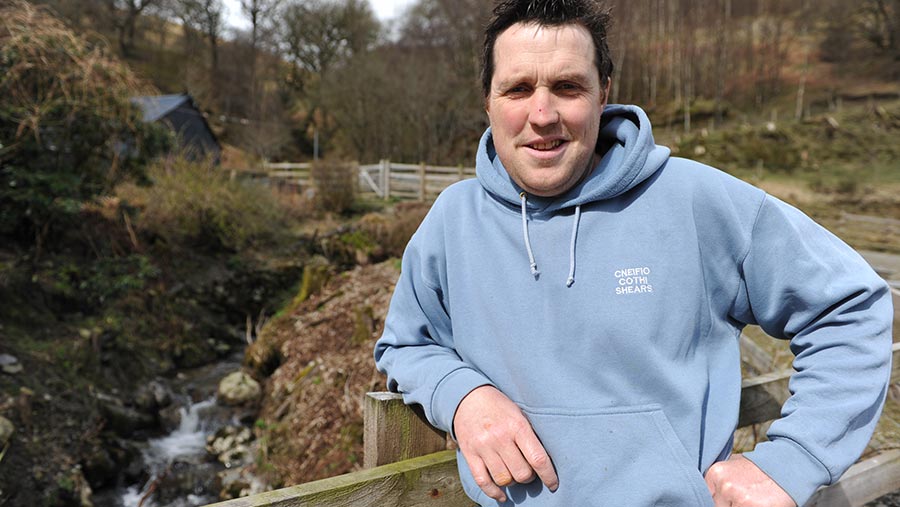 The value of high-quality grass in lamb finishing systems has been highlighted in a recent trial.

The trial demonstrated that lambs grazing a reseed achieved a margin over costs of £7.92 a head at slaughter – £2.76 higher than the next best performing feed option.

The Farming Connect trial at Aberbranddu Demonstration Farm near Llanwrda, Carmarthenshire, involved five groups of 62 Tregaron-type Welsh lambs. Lambs weighed an average of 32kg at the start of the project.

The farmer, Irwel Jones, runs a flock of 1,100 mainly Tregaron Welsh ewes and 350 ewe lamb replacements. Lambing starts on 20 March, after a small flock of crossbred ewes lamb indoors in February. A further 200 ewe lambs at the end of March.

See also: All-grass wintering could save sheep farmers £10-£15 a head

Historically, lambs at Aberbranddu are finished on reseeds and aftermath from established silage leys and sold to Dunbia.

Any lambs that have not finished by the middle of November are finished on concentrates.

Mr Jones is keen to improve productivity and cost management and to reduce days to slaughter, so the Farming Connect trial compared five different finishing diets over 10 weeks. These included:

The lambs were valued at £53 a head (£1.63/kg) at the start of the 10-week trial – the average price achieved by a group of store lambs Mr Jones sold immediately before the trial got under way.

This price was used as a benchmark to calculate how the groups had performed.

As expected, the indoor-fed lambs achieved the highest daily liveweight gains at 229g/day, and were quicker to finish – all lambs finished within the 69-day target period (see Table 1 for results).

But it was the group grazing the reseed that achieved the highest margin over costs – £7.92 a lamb.

The next best performing system was the older ley without concentrates – this achieved a margin over costs of £5.16 a lamb.

The poorest performing was the forage rape and Italian mix – the lambs on that crop lost £0.71 a head – but Mr Jones says there were a number of reasons for this.

“We mistakenly sowed the seed at too high a rate so we had a very dense crop which was difficult to utilise and had a protein value of just 9%,”  says Mr Jones, who farms with his parents, Eirwyn and Heulwen.

“I’m blaming myself for the fact the rape didn’t come out too well but I am giving it another go and have planted 11 acres this year.”

He admits that growing alternative crops on marginal land can be tricky.

“Attention to detail is key and the short growing season can make establishing a crop difficult. You can’t beat a good new ley with perennial ryegrass and white clover for reliability and flexibility,” he says.

Why he switched from organic back to conventional

Mr Jones had been farming organically for six years but reverted to conventional production in 2014.

“The land went backwards when we were farming organically, especially where we were taking silage and growing swedes as we didn’t have enough slurry and farmyard manure to go around,” he explains.

“We soil tested everything and found that the indexes on some of the fields were 0 and 1 and the pH between 5.2-5.6.

“Until that point we had been applying a standard 20:10:10 or 17:17:17 fertiliser without considering what we already had in the soil. We are now targeting nutrients to what the land needs.”

About 260t of lime was spread this year and a similar volume will be applied next year.

To keep reseeding costs as low as possible, Mr Jones uses a direct drilling approach rather than ploughing fields. “You don’t get such a clean ley but this land is quite stony so direct drilling suits the land better. We spray everything off then rough it up with a tine harrow.”

She says grass is the cheapest feed for sheep but the challenge is to have good-quality grass that is productive and highly digestible.

But Ms Stubbings says concentrates have a place in some systems. “The faster lambs grow the more efficient they are so growth rate is very important. If you haven’t got much grass and need to get the lambs away there is a case for concentrates.”

How those concentrates are fed is crucial to profit. The Farming Connect trial showed that feeding creep indoors instead of at grass doubled the profit margin over costs – £3.24 compared to £1.76.

“Competition for grass between ewes and lambs in the autumn is a vital consideration,” says Ms Stubbings.

“The ewes must have priority in the tupping period. Selling stores is an option which should always be weighed up against the potential margin from any finishing system.”