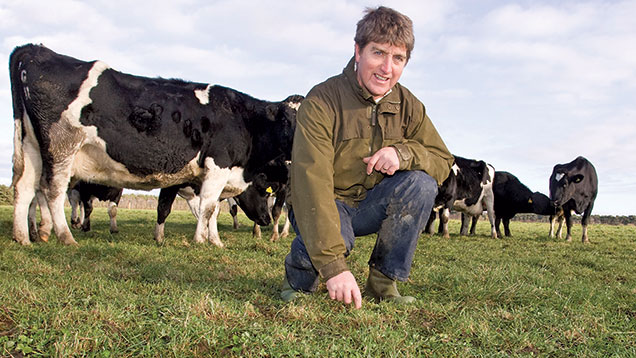 Herbal leys are helping create a continual grazing platform even in dry conditions saving money on fertiliser and supplementary feed.

For Hampshire dairy farmer Clyde Jones, switching the whole of his grazing platform to herbal leys has become essential due to the extreme weather he sees.

See also: Get more from summer grazing of dairy cows

Describing Brixeys Farm Dairy near Ringwood, Hampshire, as “the wettest dry farm in the South”, Mr Jones has experienced both flooding and drought, leaving a shortage of summer grazing and driving him to make changes to his 195ha grazing platform.

“We have to have 60 days of feed in the bunker to keep us covered for extreme weather.

“And even though we’ve got it, you still have to start an engine to feed it, increasing costs,” says former Farmers Weekly Farmer Focus writer Mr Jones.

Mr Jones first trialled herbal leys in 2013 and with milk price forecast less than favourable, he hopes to halve production costs once the entire grazing platform has been resown with a herbal mix.

The biggest savings will come from reduced fertiliser use and stopping the supplementary feeding of concentrate and forage through any dry spells.

Budgeting £60,000 for fertiliser and the same again for cake, once the herbal leys become established, and the farm makes better use of its manure and slurry, the fertiliser and purchased feed budgets should be halved.

Currently supplementing milkers with 3-4kg a head of silage and concentrates in the summer dry period, Mr Jones expects to replace this with herbal leys, which tolerate the drier conditions due to their deeper and more varied root systems.

And the money saved here can be spent on more herbal seeds – offsetting these costs with additional health benefits, he says.

He also believes these new mixes are better for stock fertility and will improve milk constituents.

“It may be anecdotal, but both groups grazed the herbal leys,” he adds.

Although a big drive on improving fertility has been taking place, Mr Jones believes the trace elements within the herbal ley could be partly responsible for these improvements.

During the ley establishment Mr Jones has tried and tested a range of cultivation methods into land of varying prior use. The table below describes the different techniques.

The most recently area sown will provide some interesting comparisons later this year says Mr Jones, whose next challenge is to try herbal silage making.

However, the herbal ley should be considered with care. Intensive grazing systems and those on a litres contract may not see the benefits, warns Mr Jones, whose stocking densities have been reduced from 3 cows/ha to 2.5/ha to give the ley a better chance at establishing.