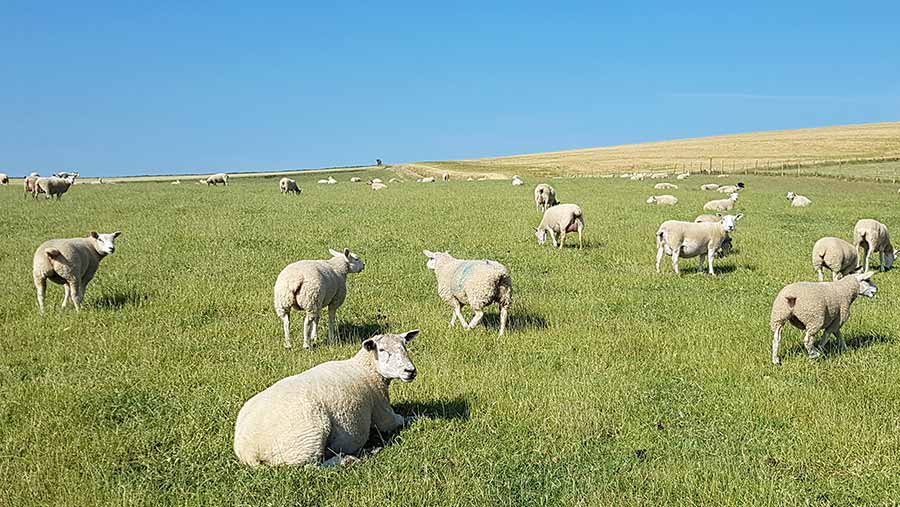 Since coming out of Higher level Stewardship (HSL) last year, he is integrating temporary grass leys with combinable crops and roots. It’s a rotation that’s still under development, but he says it is already paying dividends.

Having young and productive grass leys has even helped to weather this year’s dry conditions, says Mr West, who farms a 344ha unit on the South Downs, between Lewes and Brighton.

It has also meant the flock of 500 Texel cross Mules and Mule-crosses plus lambs are less reliant on supplementary feed.

“We didn’t feed any pellets to the lambs [this year]. We did close the ley up for three weeks at weaning; something we don’t normally do, but because the ewes were on neighbouring grassland we had to move the lambs off to some poorer grass.

“Maybe this paid off, in that the grass soon greened up and when the lambs returned, in early to mid-August, there was plenty of feed.

“It all depends on the season. But we’ve seen a massive improvement in lamb performance when they’re grazed on high-quality grassland.”

This year, he is going to increase the amount of grass in the rotation and will direct drill 30ha of grass into spring barley stubbles.

Lambs are sold to a local butcher or through Hailsham market, from May onwards. By the end of July, all but about 80 lambs are sold from the February lambers, leaving him free to crack on with the cereal harvest.

Old grazing regime versus new one

Until recently they’ve relied on grassland that was part of an environmental scheme. “We used this for rearing and finishing lambs. The problem was the leys were old and unproductive,” Mr West said.

“Stocking rate was lower and ewes looked poor on this old grass, so we relied on bought-in feed to boost their condition pre-tupping.”

Mr West opted to grow more grass when corn prices were low. “It seemed to make more sense – we could improve lamb productivity as opposed to struggling against falling corn prices and being open to the volatility of the cereal market.”

This meant grass became the third crop in his rotation.

While some of the farm remains as permanent pasture, Mr West is now growing more “temporary” three- or four-year leys and using a seed mixture – Sinclair McGill Early Start or Extra Lamb.

This combines high proportions of tetraploid perennial ryegrasses, a white clover blend and, in the case of Extra Lamb, Timothy.

A decent autumn sees the grass start to grow and by late February, Mr West looks to graze the newly sown leys.

Mr West estimates reseeding costs him £260/ha, if he includes a contractor charge, but he reckons the improved feed value it offers is worth it. And while he doesn’t weigh lambs regularly, he knows that growth rates and time to reach the target weights for selling are far better off the new leys than the old pasture.

This year he moved lambs off the new leys for three weeks and noticed a slowdown in growth rates.

“They’ve picked up now, back on the temporary leys. But this highlighted the value of growing grass with good feed quality – it pays off.

“We’ve always spent time and money on grassland, but we’ve now moved it up a level and are treating it more as a crop. The extra reseeding has added to our costs, but these have been far exceeded by the feed value and yield of the grass.”

The farm still has around 120ha of permanent pasture – some of it is gorse land on the Downs – which is used for the ewes after weaning and before they move on to the roots.

This year, he plans for lambs to stay on the new grass leys until autumn when tail-enders will be finished on brasicca crops.

“We’ve had some rain and the new grass is growing nicely – we’ll sell some off the grass, but it will keep the rest going until they move on to the rape and stubble turnips.”

About 40ha of stubble turnips and forage rape are drilled after winter barley harvest and fed to the ewes during the winter. This land is then drilled with spring barley.

“We’ve been roots and rape for five years and this works well for the ewes. While ewes still get some concentrates in the lead-up to lambing, we now feed far less. The combination of the root crops and better grass makes us far less reliant on bought-in feeds.”

The new regime is providing Mr West with early grass growth and plenty for ewes and lambs early in the spring.“And it’s persistent – it keeps growing through spring and summer. Depending on the season, we may take a cut of haylage, particularly off first-year leys, if there’s too much grass. These mixtures are giving us some flexibility.”

But what he is really pleased with is the increased stocking rate that the more productive grassland offers.

His stocking rate has leapt up to between 37 and 44 lambs and ewes per hectare.

“Not only that, but they are reaching finishing weights of between 40kg and 44kg two weeks earlier, depending on the season, and they’re looking great. There’s no doubt that the higher protein and energy in this grass boosts their weight gain significantly.” 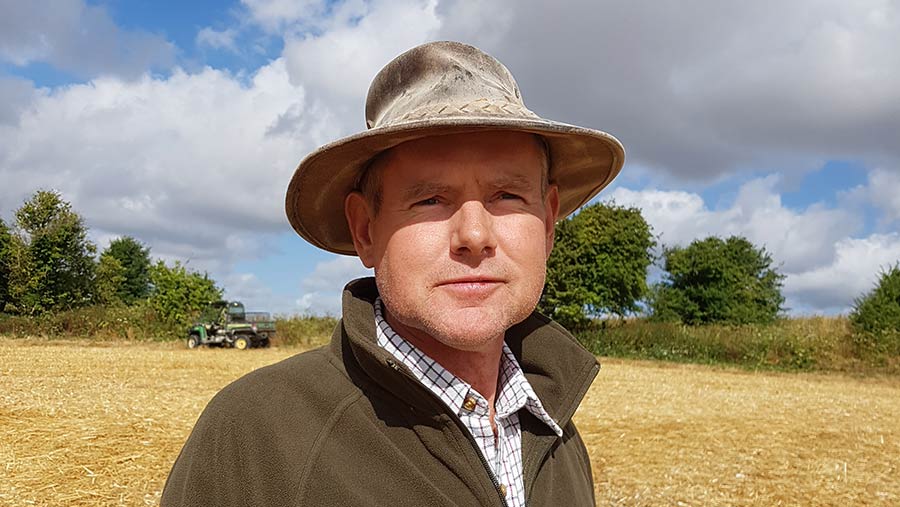