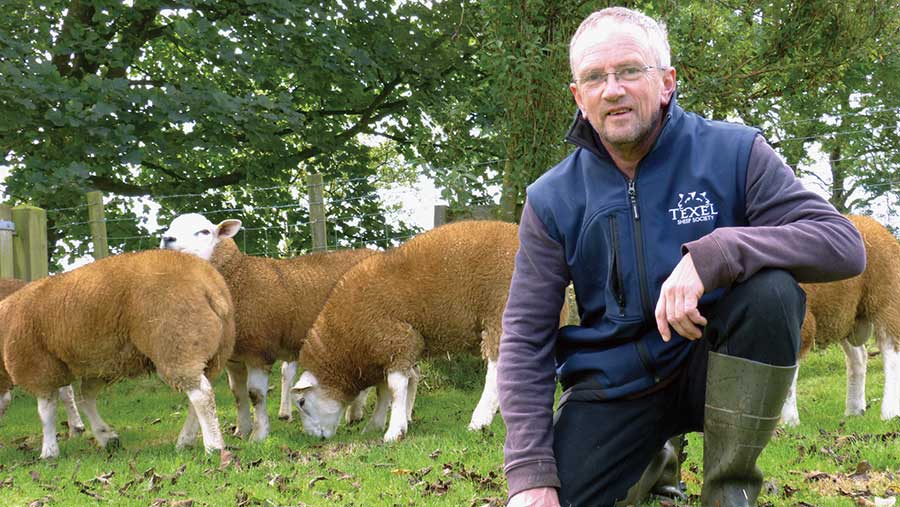 A Texel breeder has cut fertiliser costs and increased sheep numbers by 20% in his first year of rotationally grazing his productive ground.

About to embark on his second summer of rotating his flock, Dafydd Jones of Cefn Caer Ferch, Pwllheli, has almost halved his fertiliser use.

He is grazing an additional 15 replacement ewes and 15 shearling rams, along with his 120-head sheep flock of 50 pedigree Texels and 70 cross-bred recipients.

See also: Guide to setting up a grazing infrastructure

Mr Jones admits that his approach to rotational grazing is a little rough and ready, but stresses that rotating is a must.

Farmers Weekly first learned about Mr Jones’s vision to increase forage production to cut costs in his pedigree Kitrob flock back in 2018.

Mr Jones grazes up to 200 New Zealand-cross dairy replacements each summer for a local spring block calver on 40 of his farm’s 60ha.

On the remaining 20ha, he runs a pedigree Texel enterprise. This 20ha consists of roughly half marshland of varying quality and 7ha of good ground, which is now rotationally grazed.

The flock needs three months of quality grass, so ewes can milk well before lambs are weaned in late May after a February/March lambing, explains Mr Jones.

Lambs continue grazing the 7ha of paddocks, after being weaned on a concentrate ration, and fields with higher covers are shut up for silage. Ewes are dried off on marsh ground.

The ewes have been wintered on a neighbour’s pasture from December to mid-January for the past two years. This means the farm gets the advised 90- to 100-day rest.

Ewes return home and are housed to lamb under the watch of a camera, and are turned out in April as grass availability allows.

Soil tests are taken most years, which has chartered the improvement of pH levels and has allowed phosphate and potassium levels to be optimised.

Six reels of electric fencing and one shocker were bought for £1,000, but as Mr Jones explains, so far, it’s just been permanent fencing that has halved the largest 1.82ha field.

“I put in a permanent fence along a ditch that cut through the field meaning sheep can get water in both paddocks.”

Mr Jones plans to split a 1.17ha field and two 1ha fields into smaller paddocks this year, with a combination of permanent and electric fencing.

Initially, a plate meter was borrowed to help Mr Jones train his eye. Fields are entered with covers at about 2,200-2,500kg DM/ha and residuals of 1,500kg DM/ha are left.

These days,he moves stock by eye on three-day shifts on seven paddocks, which equates to a 21-day rotation. This suits the early season grazing when grass growth is good before lambs are weaned, explains Mr Jones.

“Moving sheep is easy. From the start, they would follow the quad bike anyway. Now they know they’re moving to good grass.”

What are the benefits

This is a saving of more than £300/year, which will mean the electric fencing equipment will have been paid for in three years.