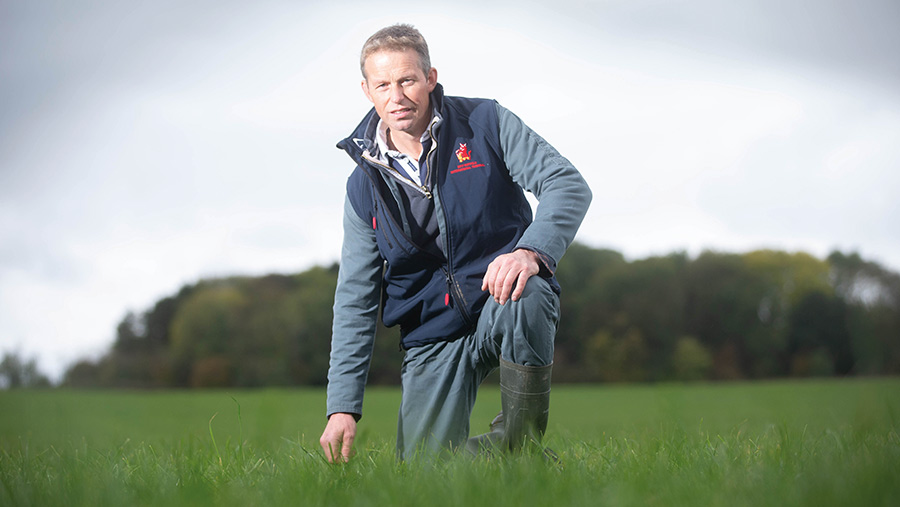 A large-scale organic dairy farming business is growing up to 14t/ha dry matter of grass on its silage ground with minimum inputs since increasing soil organic matter fourfold.

Wil Armitage runs 1,200 Holstein Friesian cows across four farms in Leicestershire, in collaboration with others and as an owner-occupier.

At one of those sites, Keythorpe Farms, which Mr Armitage manages with his business partner, Peter Dixon-Smith, milk had been produced conventionally until 2005, when conversion to organic got under way amid tightening margins in the existing high-input, high-output system.

That switch initially resulted in a 40% drop in grass production but, by applying the principles of biological farming to the land, the silage land is now growing an average of 12-14t/ha DM from red clover, Italian ryegrass and lucerne seed mixes.

There is high performance on the grazing platform, too – in an average year, the permanent leys, many of them 15-20 years old and with their origins in Nickerson Red Circle mixes, grow 9.5t/ha DM; in 2017, 11.2t/ha DM was achieved.

This impressive level of performance in an organic system is the result of an approach to managing the land that puts the biological health of the soil first.

“Soil biology creates the vital links between the minerals in our soil, the plants, the animals, and, ultimately, the nutrient density of food,” says Mr Armitage.

His research as a Nuffield Scholar on the role of soil for feed integrity in sustainable milk production helped inform his decision making.

Since the soil was first tested for organic matter content in 2005, the level has increased from 2% to 8.2%.

As well as providing nutrients and habitat to organisms living in the soil, organic matter binds soil particles and improves its water-holding capacity.

The starting point for improving soils at Keythorpe Farms was to establish the base saturation levels – the total amount of mineral within the soil, available or otherwise.

“Once you know what you have got, you can adopt a policy of improvement,” says Mr Armitage.

To address this, Epsom salts (magnesium sulfate) is applied, sprayed directly on to the plant leaf as a foliar feed after the third and fifth grazing rounds; the quantity applied is dictated by weather conditions and when in the cycle of grazing rounds it is applied.

Other nutrients are delivered by cow slurry and farmyard manure (FYM) – as some organic concentrates are fed to the cows, this will include some imported phosphate (P) and potassium (K).

“There are literally tonnes of P and K in soils, but as farmers we have to mobilise them,” says Mr Armitage.

“FYM and slurries are bioavailable nutrients that are already locked to a carbon source, making them pretty stable in the soil – they can massively enhance soil biology, especially if composted.”

No slurry is applied to the grazing platform through the grazing season. Mr Armitage suggests that the over-application of highly soluble fertilisers shut down soil biology and burn off soil carbon reserves, causing imbalances in soils.

“The immune systems in plants are challenged [by the soil imbalance], so there is a higher requirement for herbicide and pesticide use and a risk of producing empty calories.”

By enhancing the soil biology, mineral transfer to the plant is high and this has obvious benefits for livestock and, further down the supply chain, human health.

“High-quality, mineral-dense food can only be produced through healthy soils and we are now seeing that coming through in cow health,” says Mr Armitage.

The annual mastitis rate is currently running at four cases for every 100 cows in-milk.

As well as grassland, the farm grows 11ha (27 acres) of fodder beet to lift and feed to the autumn-calving herd throughout the winter; this is introduced four weeks prior to service and that DM provides a good boost for cow fertility. Last year’s crop grew 15t/ha DM.

“We lift at the end of October, and as the grass comes out of the cow diet, the fodder beet goes in – 1.5-2kg/day DM, and that is a big energy boost prior to the beginning of service on 20 November,” says Mr Armitage.

“It is a very valuable crop to us in an organic system, even if it takes a bit of work.”

Soil is never left bare – cover crops of oats, vetch and fodder radish and diverse wholecrops of oats, barley, peas, beans and vetch are sown after the fodder beet.

After this is rolled in, grass, red clover and lucerne is sown on top and the soil is rolled again. This mix is important for soil health. “If you are only growing a single plant, then the microdiversity will be a lot less.

“We have got to build diversity into our systems, to work with plant synergies and look at how they interact,” says Mr Armitage.

This can take agriculture to the next level, and reduce reliance on imported feed also, he suggests.

The mix of legumes and cereals allows the farm to grow 37t freshweight/ha over a 100-day period.

“I don’t think you can get a better protein source available to the cow than lucerne,” says Mr Armitage.

And he reckons that oats are an undervalued crop that can efficiently mobilise soil P and K.

“We need to keep fields green. Oats have a massive root system and they mobilise P and K from the soil and convert it into a bioavailable form that can be used by other crops.”

Mr Armitage believes greater collaboration between livestock and arable farmers is needed going forward, if soils are to continue to produce quality food.

He saw this in the soil health of some of former arable land he now farms. The soil was initially dead as crops were being grown out of a bag and this was doing nothing for soil health.

“This will increase organic matter and retain more water in the soil to grow our most valuable asset on farm, increasing productivity and profitability.

“As livestock farmers, we have a huge opportunity to improve soil health, as both systems rely on feeding microbes and there are direct synergies between both.

“The biological health of our soil is our best asset: biological farming is the future.”