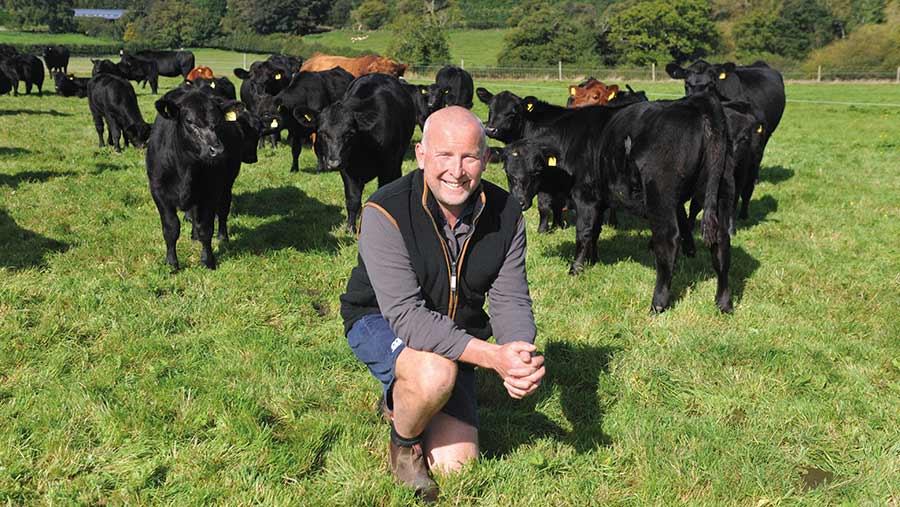 A system of grazing dictated by a strict pasture recovery period is building soil organic matter and increasing plant diversity on a Welsh livestock farm that produces lamb from grass only.

Geraint Powell has been managing Cabalva Farm, near Hay-on-Wye, for two growing seasons, applying the regenerative agriculture principles he researched as a Nuffield Scholar.

Ewes are never housed, lambs are grown without supplementary feed and hay is the only additional feed given to the grass-fed suckler herd and their offspring.

Herd facts
• Pedigree and commercial cattle
• Cattle numbers will be doubled over the next five years
• All service natural using a native Red Angus stock bull
• Calving in May and June
• Calves weaned naturally at 10 months
• Cattle sold as stores, fat cattle or direct to pubs and restaurants

Expenditure:
• Livestock
• Infrastructure – permanent and temporary fencing, energisers and water
• Hay – can be a cheap nutrient and seed
• Straw for the limited housing period

Central to this is a system that allows pasture to recover fully before re-grazing.

See also: How suckler herds can reduce their carbon footprint by 40%

Short bursts of grazing followed by long rest windows allow roots to flourish, the plant to grow a bigger leaf area for harvesting energy from the sun, and organic matter to build from dead material at the base of swards, Mr Powell explains.

“It is all about the recovery period and grazing at a density where the animals are not grazing selectively, this gives all plants a chance to grow and express themselves.’’

The farm is stocked at a rate of 0.95 livestock units (lu)/ha, but Mr Powell says building organic matter will allow the land to support 1.35lu/ha within five years.

Although yield from these perennial leys falls short of ryegrass, it can support 420 wool-shedding Easycare ewes throughout the year sold with their offspring sold at an average of 111 days as light lambs or stores.

The flock shares the grazing with a herd of 38 Aberdeen Angus suckler cows and calves.

These, too, are wintered outside, on deferred grazing and homegrown hay. They are housed on hay for 60 days from mid-February when the grass sward is dormant.

“We like to keep the cattle housed when the grass starts to grow, which means the pasture gets a chance to build a decent solar panel early in the season,’’ says Mr Powell.

“I prefer to bale graze when grass is dormant, then hold back until covers are at the right stage to graze.’’

The farm rises to 600ft above sea level and has an annual average rainfall of 900mm.

For the system to work in this environment, plants must fully recover before grazing, to the point where they are on the cusp of flowering and shedding seeds.

“The livestock eat a lot of seed, the plant’s energy is going into those seeds so they provide a very high energy source,’’ says Mr Powell.

“When you get to July and the cattle are into long grass they really perform, there is a good balance of green and brown material to balance the rumen and grass seeds give their coats a great shine as they are a very high-energy feed.’’

Cattle are paddock grazed and given a fresh break every one to three days – paddock size is dictated by grass availability, season and time constraints, but can typically range from 0.2ha to 2ha. 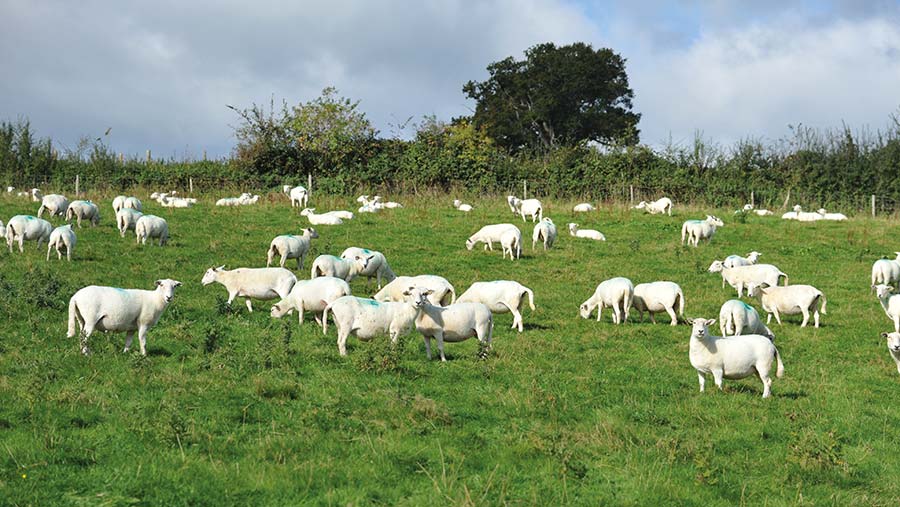 The grazing system for sheep is more flexible. Ewes are set stocked ahead of the start of lambing on 5 April.

A grazing rotation starts when lambs are three weeks old, with fields divided by electric fencing into paddock sizes that reflect the stage in the growing season.

“If animals aren’t limited in any way they will reach their optimum performance,’’ says Mr Powell.

“When moving to a new paddock I have seen cows choose nettles and hazel leaves over fresh grass – we call them weeds but to cows they are food.’’

Having lots of different plants growing throughout the year gives better resilience to climatic shocks.

Mr Powell suggests that the key to healthy soil is to have a diversity of plants catching sunlight and pumping carbon into it.

“Plant diversity is the missing piece of the jigsaw that we need to encourage back into our grassland systems,’’ he says. 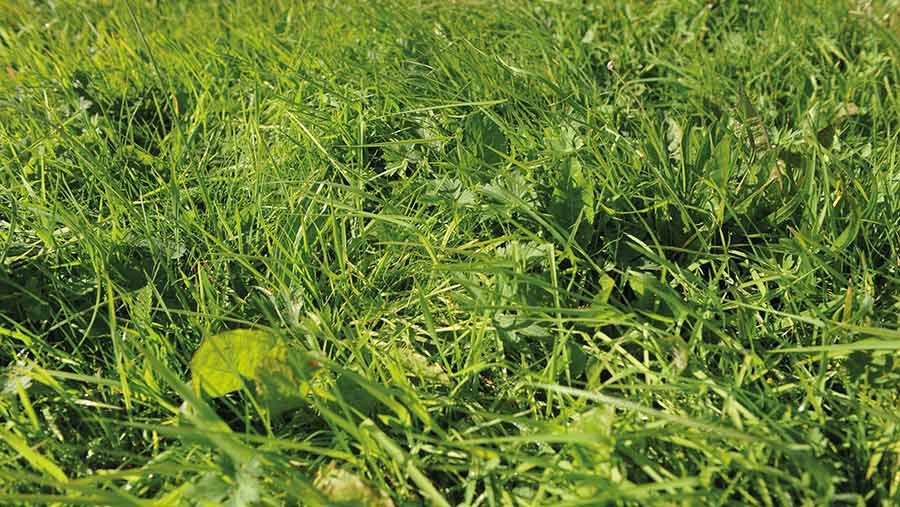 Cabalva Farm is not organic but no chemical fertiliser is applied.

“I make use of atmospheric nitrogen instead, there are tonnes of it above every hectare,’’ Mr Powell insists.

Mr Powell says more sampling will be done as the farm approaches what he believes to be the optimum stocking rate.

“We will make a decision then on whether corrective action is money well spent. I am not keen to start a never-ending cycle of spending on inputs if it doesn’t realise a positive financial or ecological response.’’

Mr Powell’s ecological decisions are tested against whether the actions would be detrimental to earthworms – if the action is damaging then it doesn’t happen.

“Earthworms are my most important below-ground livestock, Charles Darwin described them as ‘more powerful than the African elephant and more important to the economy than the cow’. And best of all, if looked after, they work for free.’’

The estate’s owners, the Guest family, share his vision for a natural and resilient business.

Mr Powell had been farming in the Cotswolds for 20 years, running a large-scale sheep and beef enterprise on an extensive system, when he was offered the opportunity to farm at Cabalva.

The low-input strategy he has adopted targets the land’s optimum sustainable output rather than going all out for the maximum.

“It is about profit, but without being yield-orientated. The land will dictate what the output should be.

“When you pass optimum it is obvious, because this where cost and stress increase and profits fall.’’