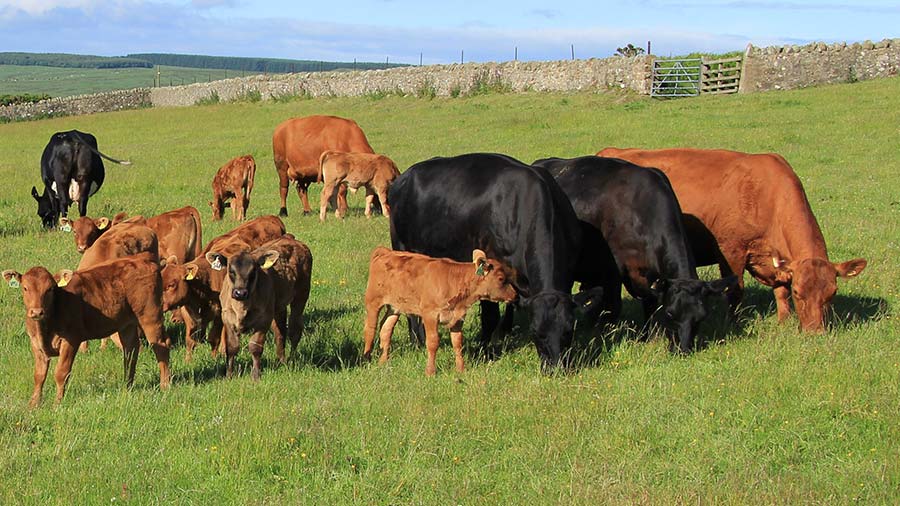 Research conducted by the Stabiliser Cattle Company and Alltech E-CO2 has revealed that suckler producers can achieve a near 40% reduction in carbon footprint while saving £350 per cow place through a series of incremental system changes.

The companies have used a computer-based modelling tool to assess 12 different variables in suckler herd management and their impact on the carbon footprint of the system.

Results showed that most of the changes would decrease carbon footprint when implemented as a standalone change, and then when combining all of them in a bull-finishing system, a carbon reduction of 39.7%/kg of beef produced was achievable.

The combined changes would also increase profitability as well as reducing carbon footprint due to the efficiencies achieved.

“We need to move away from seeing carbon footprinting as a burden or simply a tick-box exercise and see that this is beneficial, as a proxy measurement for efficiency and profitability of a farm as well as simply a measure of waste,” said Dr Stephen Ross, senior sustainability specialist at Alltech E-CO2.

Anywhere you can identify inefficiency in the life cycle of an animal or on the farm will have a resounding impact further up the supply chain and reduce the emissions of meat, Dr Ross explains.

Seth Wareing, Stabiliser Cattle Company business manager, acknowledges while there are some quick wins, such as reducing age at first calving or feeding forage-only, completely changing system to incorporate all of the more efficient management practices will take time.

How the trial worked

This data was put into Alltech E-CO2’s Beef Environmental Assessment tool so that a carbon footprint could be determined for the average UK suckler herd.

The trial then changed one management factor at a time (for example, cow size) to see what the impact was.

Aside from the individual variable, all other inputs remained fixed, such as electricity use, fuel use).

A total of 12 different scenarios were tested. These were all based on achievable management practices seen in Stabiliser Cattle Company data, which comes from more than 100 farmers a year, recording 12,000 cattle a year.

Scenario 8 and 9 causes: Animals are on farm for a shorter period of time, which requires less feed and other inputs, therefore, reducing carbon footprint.

Scenario 11: Stacking all of the cow and youngstock changes in a steer finishing system

Scenario 12: Stacking all of the cow and youngstock changes in a bull finishing system

“These management practices are things that don’t only reduce carbon footprint, but things that improve the profitability of the farm, the resource use of the farm,” says Mr Wareing.

“What we see is if you stack all of these on top of each other, for the farmer going from the AHDB average system to the bull-finishing system with a Stabiliser herd, is a saving of about £350 per cow place.”

That comes from increased output and the savings associated with the smaller cows and the easy-management cows, Mr Wareing explains.

Independent beef agricultural specialist Jimmy Hyslop says that when considering which of these learnings to implement on farm and how, you need to work out what the limiting factor in the system is then establish how to maximise profit per limiting feature.

Two of the most common examples of limiting factors on farm are:

Based on the results of scenario 12 (making all of the cow and youngstock efficiency changes and finishing all males as bulls), Mr Hyslop explained what that would mean in terms of shed and grazing space requirements, and how that could actually allow herd expansion.

“By making these changes to the efficiency of the system, achieving the greater output and finishing cattle as quickly as possible, it’s possible to make most efficient use of the same fixed costs, in this case land, in your farming business,” Mr Hyslop explains.

Comparing the shed space requirements of the bull beef stabiliser system that had the stacked changes to reduce carbon footprint with the AHDB average shows that less shed space is required because finished cattle are off the farm sooner.

This would allow the system with a lower carbon footprint to carry 30 more cow-and-calf units.

A similar analysis reveals you can keep another 38 cows on the same area of grazing in the stabiliser system with stacked changes, compared to an average herd.