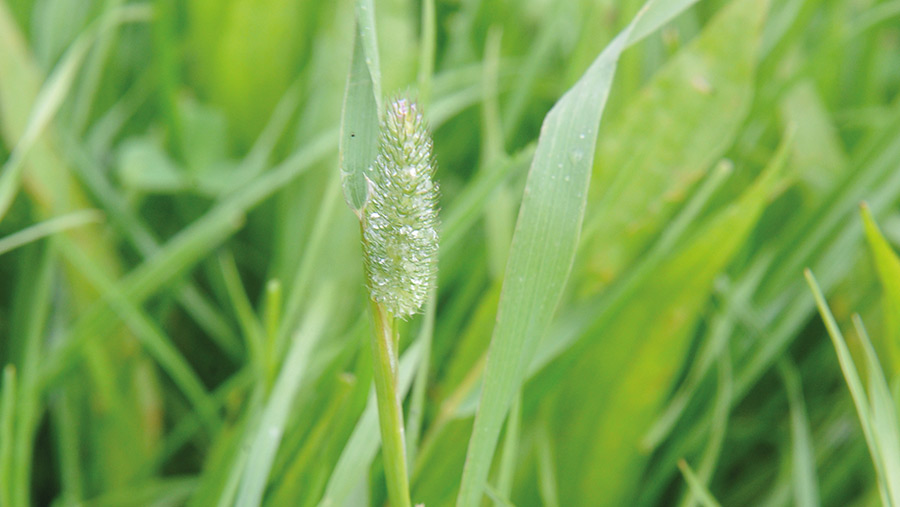 Rising to 430m at its highest point, the land farmed by John and Sarah Yeomans and their family can be a challenging environment for growing grass on the shoulders of the season.

But by incorporating timothy into seed mixes, leys are yielding an average of 10t dry matter (DM)/ha.

Timothy can grow when the soil temperature is at 0C and the air temperature is 5C. It is the main grass species grown in Finland, where it is normal to have ice and snow in April, just weeks ahead of first cut in June.

See also: Why a dry upland farm is switching to herbal leys

Since visiting Finland on a Farming Connect management exchange programme, Mr Yeomans has been trialling its use on wet, deep peat soil in his beef and sheep system at Llwyn-y-Brain, in Wales.

The couple farm with their sons, Tom, Jack and Joe, and partners Grace and Mikaela.

The results from the trial – which involved 10 plots – have convinced Mr Yeomans that timothy will now have a place in his system.

Leys that established well in 2019 averaged more than 12t DM/ha in 2021, providing valuable feed for 58 ewes and lambs a hectare for nearly three months and extending late-season growth considerably.

“It lifted productivity massively from May to late June,” Mr Yeomans reports.

Independent grassland specialist Chris Duller has been providing technical input for the EIP project together with Iwan Owen, of the Institute of Biological, Environmental and Rural Sciences (Ibers).

Mr Duller said similar small increases in timothy were observed in some of the other original plots, which had experienced challenging establishment conditions caused by exceptionally high levels of rainfall.

This is because difficult ground conditions prevented a spring application. 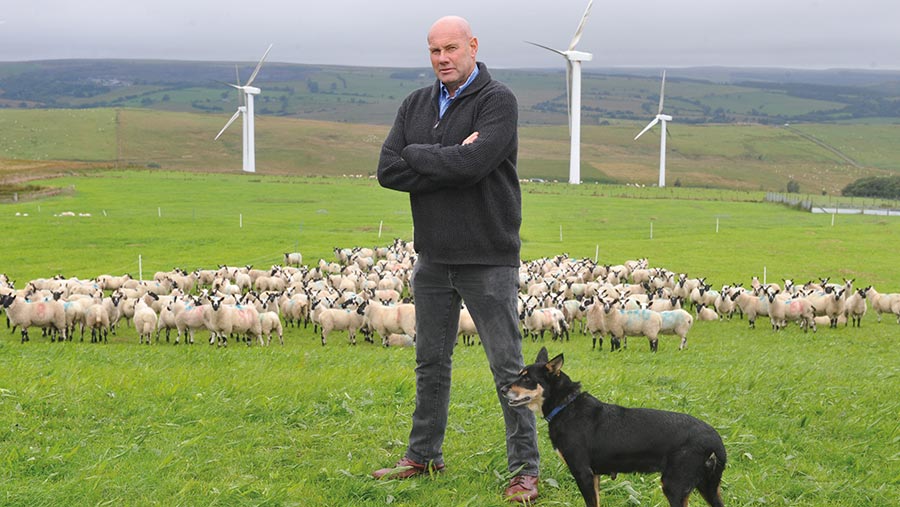 During a recent joint EIP Wales and Farming Connect open day at Llwyn-y-Brain, Mr Duller said a key finding from the trial was that timothy had grown as well as ryegrass in all but one of the plots.

There was no difference in the protein and energy values of timothy and ryegrass, despite an expectation that the quality of ryegrass would be higher.

But the results showed the highest percentage of timothy that could be achieved in any of the plots was 25%, whatever the sowing rate of the seed.

“This suggests that if we want to increase the diversity of grass then we need to think about increasing the percentage of multispecies leys which include other grass varieties, too,’’ said Mr Duller.

In addition, understanding the longevity of timothy compared with ryegrass – a key benefit of this species – can only be known further down the line, he said.

But Mr Yeomans is grateful for the three-year timescale of the EIP project. “You have to trial something for three years to know whether or not it will work.”

How Finnish farmers have doubled yields

Farmers in Finland have doubled yields from grass leys made up of mostly timothy by adopting a range of strategies, including using more diverse seed mixes.

By reseeding with new seed mixtures every three to four years, performance has improved considerably, Ms Ellä told farmers at the open day.

The traditional timothy and fescue silage leys they had grown previously were hardy enough to withstand harsh winters and deep snow followed by intense hot summers.

However, annual overseeding was common because leys became patchy due to losses.

This has been resolved by using diverse mixes.

The most popular mix incorporates 55% timothy, 15% tall fescue, 15% meadow fescue, 15% perennial ryegrass, and at least 4-5kg of a blend of red, white and alsike clover.

Meanwhile, diploid perennial ryegrasses, alsike clover and white clover are oversown in the spring to replace that lost to winter kill, and increase D-value and palatability of second and third silage cuts.

Sowing rates for a complete reseed are as high as 30-35kg/ha to allow for winter losses, and overseeding is done at 10kg/ha.

As timothy seed is far smaller than ryegrass, shallow sowing is crucial, said Mr Storberg. He recommends planting seed no deeper than 1cm.

Beyond this depth, establishment is likely to be reduced and there is a high risk that weed grasses will fill the gaps.

Ms Ellä advises a three- to four-year rotation. If the ley is left any longer than this, there will only be timothy left in the last year without successful overseeding, she says.

Good density going into the winter prevents problems the following year, and grass grows at 350kg/day before first cut.

Fields should be walked regularly to inform decisions on overseeding in early spring or late summer.

Analysing swards ahead of cutting is important as cutting too soon can result in a major loss in yield. This is because daily growth averages 200-400 kg DM/ha in the last 15 days before first cut.

But if the peak cutting day is missed, timothy will quickly head and that will result in a nutritional penalty.

The recommended mowing height is 10cm to allow better regrowth.