For Dafydd Parry Jones, Maesllwyni, Penegoes, Powys, the piece of advice given at a farm meeting of “don’t underestimate the power of clover” has led to the 190ha organic farm being able to finish sheep and rear cattle on zero concentrates.

As an organic farmer, concentrates can be as high as £450/t, so Mr Jones wanted to become self-sufficient, but was limited in what he could grow with undulated fields ranging from 50-300m above sea level.

In 2012, he became involved in a five-year project with Waitrose, looking at feeding animals in the uplands.

As part of this, he focused on using multi-species leys and feeding red clover silage.

What is a multi-species ley?

As the name suggests, a multi-species ley contains a range of plant varieties that allows the developing ley to change naturally over time.

This reduces the need for excessive ploughing in difficult upland terrain.

Typically, red clover dies out after about three years and would need to be ploughed and established with another crop due to disease issues.

However, by planting a mix of species, the lifespan of the ley extends to 10-15 years as they each mature at different rates.

Mr Jones now reseeds silage leys every 10 years and under sows in April with barley, oats and vetch, which gives bulk and helps controls weeds by creating a canopy.

Red clover is dominant for the first three years.

However, a new variety called Aber Claret is helping stretch the red clover lifespan up to five years.

Mr Jones has 55ha set aside for first-cut silage.

Another 15ha of recently reseeded pasture (three years old and under), which is dominant in red clover, is then used for the quality second cut and sometimes a third cut of silage.

First-cut silage is taken at the end of June and second cut in July/ August.

It is the second cut that produces the highest-quality silage.

Second-cut silage is placed into a separate small silage pit and used solely for sheep and calves.

An additive is applied to help the ensiling process.

Not only do the plants mature at different stages, they also grow at different temperatures and have different root depths making the leys more tolerant during extreme weather and also aiding soil fertility as the roots tap into the minerals at different depths.

Mixed grazing is key to managing the leys, says Mr Jones. Ewes and lambs are given the best grazing from March-July.

When the cows calve down in April and are turned out as they calve, they are used as a “mowing/grazing tool” behind the sheep to stop the grass from getting away.

Mr Jones says: “For the first half of the year up until 1 July, the sheep get the priority grazing.

“We use the cows as a grazing tool to keep the grass short and weeds down until the heading date has passed around the 20 June.

After 1 July, the cows get priority as they need more energy after being put to the bull and to support a growing calf so the leader following system changes with the cows getting the first bite of grass.

“The sheep are then used as the grazing tool as their energy needs are less post weaning. “The aim is to keep the grass length at 4-6cm for the heading date period,” he adds.

Manure and slurry are applied to the grazing ground along with lime and phosphate. Fields are closely monitored with soils tested every three years.

This has meant the majority of lambs are sold fat in June and July as opposed to autumn.

Red clover silage is fed to sheep a fortnight before and during lambing. Since feeding this, twin lamb disease has dropped to almost nothing in the flock.

Mr Jones says: “Before we would always have a bottle of calcium or energy bottle on standby to treat for twin lamb disease.

“Because they are receiving consistent quality silage, they are eating 24/7, so we don’t really see any cases now,” he says.

This is mainly due to the drop in feed costs and finishing the majority of lambs a few months earlier. 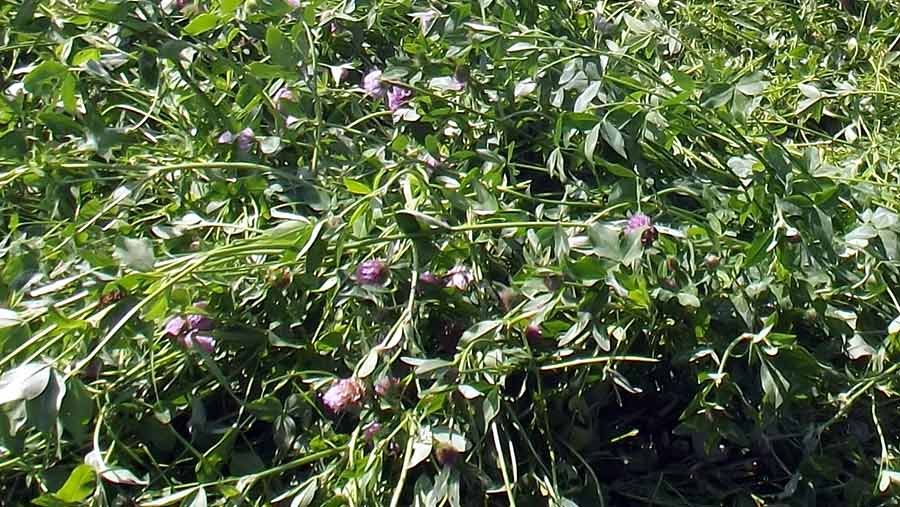 Concentrate feeding in the 70 head Limousin-cross and Hereford-cross herd has virtually reduced to nothing.

Steers are finished between 18 and 22 months, and for the last two months they are inside and fed organic cereals and silage.

Since introducing the native Hereford into the herd and moving away from pure Limousin cattle, daily liveweight gains at grass have increased from 1.3kg/day to 1.6kg/day.

No creep feed is given to the calves and they have access to the best-quality silage all winter.

“We can now fatten our own cattle mostly on grass and red clover. From August onwards, the cattle paddock graze the silage aftermaths.

“The cattle are gaining 1.6kg/day on the clover aftermaths and the quality of the clover keeps until October.

“The aim is for the cattle to be out grazing for seven months-plus months of the year,” he says.