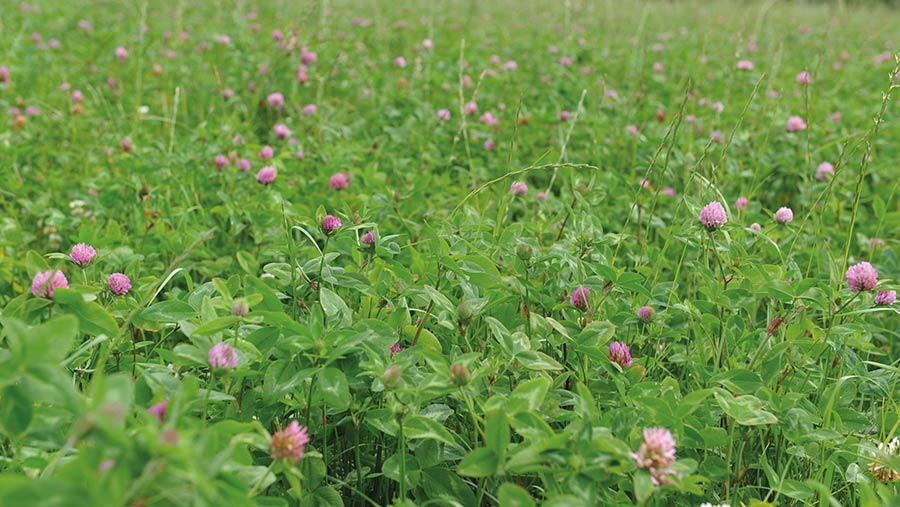 From its superior protein quality and high intake potential to its nitrogen-fixing and soil-enhancing abilities, there are many reasons to add red clover to a grazing or silage seed mix.

The one downside has been a lack of persistency, but when coupled with careful management, modern varieties can yield well for up to five years.

Grassland and forage specialist Charlie Morgan gives his tips on how to prolong the life of this protein-rich legume.

Soil fertility has a role to play in the survivability of red clover at all stages of growth. At establishment, pH must not be lower than 6-6.5; if it is, lime well in advance.

Maintain these levels by replacing what you take off when cutting for silage – 8kg of phosphate and 27kg of potash for every tonne of dry matter (DM) harvested.

Red clover fixes its own nitrogen (N), but an application of 50kg/ha (20kg/acre) can help with establishment, depending on the level of clover in the mix and the yield you are aiming for.

It is grown successfully without N in organic situations, but in a conventional system, in a three-to-five-year rotation and especially following cereals, N will help you get the best out of it.

Avoid set stocking – if animals get a taste for red clover, they will be selective and graze it right down.

Rotational grazing causes less damage to the crown and allows recovery time – the plant only grows from its crown so if this is damaged it will die.

Don’t graze too tightly – for grass the recommendation is to graze to 4cm, but for red clover it is 6-8cm.

Red clover is compatible with the grass targets for DM/ha, typically 2,500kg DM/ha. But grass will lose quality before red clover so use grass growth to make grazing decisions.

Red clover needs a winter rest – don’t outwinter or feed silage on it because the crowns will be damaged by feet trampling the ground in wet conditions.

The rest period depends on where you are based, but livestock would normally need to come off at the end of November and the field rested through to March.

It is best to cut at the third bud stage, when the field is 10-15% in flower. This is the best stage for quality and for the plant to get some reserves back into its roots.

If you wait for it to flower to increase yield, you will lose quality and digestibility.

Cutting blades need to be set 8-10cm above the swath or you will lose the crown. Set rakes well to avoid crown damage and risk of soil contamination.

Consider a tramline-style system because every time you run over the crowns you risk killing the plants.

Wheel damage is a particular problem in a baled system, where you have big trailers loaded with bales moving around the field. Do everything you can to minimise this risk of damage.

Graze the regrowth rotationally in the autumn, after the last cut has been taken.

Older varieties have tended to last no longer than three years because of the natural ageing process of the crown, but genetic selection and other improvements have led to varieties which are productive for five years.

There are also plants at the research stage lasting for seven years, so improvements in persistency are ongoing.

Hybrid and perennial ryegrasses have similar heading dates to red clover, which is good for cutting.

Avoid Italian ryegrass as it comes to head too early and will not maintain its performance for three years to match the red clover.

Red clover can also be grown successfully as a monoculture, with three or four cuts a year lasting up to three years. To hedge your bets, grow two varieties within that seed selection.

As the area of red clover grown continues to increase, there is greater risk of more disease breakdowns. Sclerotinia, or clover rot, is the main concern.

A five-year break after growing it is a must.

If you do get sclerotinia, don’t go back into that field with red clover for at least 10 years. White clover and grass can be used as a break crop.

If red clover is being cut, make sure the cutting machinery is really clean and harvest newer leys first, older ones last.

In grazing systems, where there might be a little bit of clover in lots of fields, risk of disease can be even greater. Treat red clover mixtures as specialist livestock finishing crops and do not sow them into every field across the farm.

Stem nematode is the most common pest found in red clover – again the most effective control is rotation with a five-year break.

As red clover plants grow from a single crown, recolonisation of areas affected by pests or diseases is not possible.

Grow with companion grasses to help prevent weed ingress into bare patches, and also with white clover if you need the ley to last longer.

Most weeds can be controlled by grazing, topping or weed wiping.

Maintain soil fertility so red clover can be competitive against weeds.

Multiple studies have shown that red clover’s combined benefits of high crude protein and growth-promoting properties are a natural means of increasing liveweight gain and reducing time to slaughter in lamb and beef finishing systems.