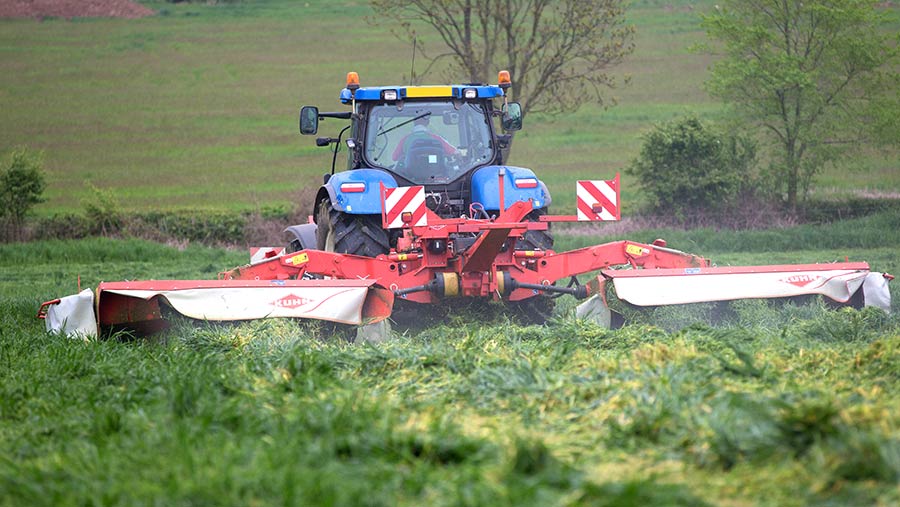 Farmers should test grass before they cut © Tim Scrivener

Grass yields may be rising but crude protein levels in silage are still relatively low across most of the UK.

Environmental regulations, lower fertiliser use and selection of unsuitable varieties are among the main culprits.

But levels can be improved through better nitrogen management, the use of sulphur-containing fertilisers and carefully selecting the best grass varieties at reseeding, says David Lawson of the SRUC.

He says genetic advances through breeding and improved management are increasing grassland yields, with the average yield rising by about 0.5% year-on-year for the past 10 years, equating to an overall improvement of 5%.

However, crude protein (CP) levels have dropped, with averages hovering around 11-12% and last year some values were as low 6-7%.

What is causing the trend?

While there is a general trend for protein levels to drop as yields increase due to a dilution effect, there are indications that some higher-yielding, modern grass varieties are adding to the problem, says Mr Lawson (see 2018 silage analysis results).

Source: Based on 700 Scottish samples submitted to SRUC in 2018. Field trials were based on six samples of grass each for first and second cut, taken from the same field over two years in 2017-18.

“It looks like modern grass varieties are more efficient at producing DM yield and using nitrogen (N) to achieve this but this can be at the cost of protein synthesis in the plant.”

The British Survey of Fertiliser Practice shows annual nitrogen use on grassland has halved from an average of around 120kg/ha on all grassland 20 years ago to just under 60kg/ha currently.

“We’re using a lot less N on grassland than we did 30 years ago as a result of NVZs and better farm practice so it’s very likely this is having an effect. Nitrogen is the key element in protein production.”

Although farmers might think they are saving money by using less fertiliser, it can be a false economy, as Dr Fisher explains.

“Overall, I would say making up the shortfall with bought-in feeds can cost twice as much as correcting this by getting your fertiliser management right in the first place.”

Dairy Group national nutritional manager David Donaldson agrees that having to make up the shortfall adds considerable complication to ration planning and feeding on-farm as well as hurting farmers’ pockets.

“Including high levels of soya and other protein sources at feed preparation time definitely increases cost, but it also adds another layer to rationing that is best avoided if possible,” he says.

“You’re much more likely to keep production consistent and avoid any potential dips if you have a good supply of high-quality forage available than if you’re forever having to make adjustments and add ration ingredients through the winter.”

David Donaldson says a CP level of around 18% is the ideal target for high-yielding dairy herds, and for intensive sheep systems the target should be 16%.

Below we look at how farmers can improve CP levels.

A good starting point is to make sure all the varieties in a mix are on the current Recommended List, says Jim Juby of Horizons Seeds.

One of the first things to consider is Nitrogen fertiliser Use Efficiency (NfUE) – this is an estimate of how much nitrogen is being used by the plant and not being lost to the atmosphere, leached in drainage or left in the soil.

Values typically range between 50% and 85% – the higher the number the greater the efficiency. Therefore, the lower your N losses the higher your NfUE value will be.

Trials showed a reduction in N loss to the atmosphere of about 20% (in kilograms of N applied per ha) by using Nitram (34.5% N) compared with urea on grassland.

In 10 replicated trials Nitram (34.5% N) outperformed urea, with the average protein value for urea-treated plots being 13.5% compared with 15% for Nitram.

“This is down to two things,” explains Dr Fisher. “Firstly, you lose less N to the air when you use AN, and secondly AN-treated grass has a higher N content than urea-treated grass.

“In some cases, the difference has been as high as an extra 3.1% from the same N application rate simply because more of the fertiliser is finding its way into the plants rather than being lost.”

Inadequate levels of sulphur and a lack of P and K can also directly affect grassland’s ability to use nitrogen.

“Sulphur is essential in the production of two vital amino acids – methionine and cystine – and proteins cannot be synthesised efficiently without these,” explains CF Fertilisers’ James Holloway.

“It’s not that long ago that we got 70 to 80kg/ha of sulphate simply falling out of the sky every year [from airborne pollution], but as industry has cleaned up its act, this has fallen to below 10kg/ha and in many areas below 5kg/ha.”

In fact, trials carried out by CF Fertilisers and Galloway & Macleod in Scotland showed restoring sulphur levels in grassland lifted proteins by 7% and increased yields by up to 2t/ha.

The level of nitrate nitrogen (NO3-N) at cutting is a good indicator of crude protein levels, and grassland farmers should be targeting 0.15% of fresh matter at cutting, says Dave Davies of Silage Solutions.

He reckons most farms are below this at 0.05% the week before harvest, with 14% CP rather than the desired 16% CP and so more N could have been applied.

“If nitrate fertiliser runs out before cutting, the crude protein has been diluted as the grass yields increase in the last one or two weeks and farmers would have had room to apply more fertiliser or slurry during the growing period before harvest.”

Dr Davies suggests taking a grass sample and sending it off for analysis one week before cutting to gauge nitrate N and crude protein levels, and adjusting application rates before the next cut.