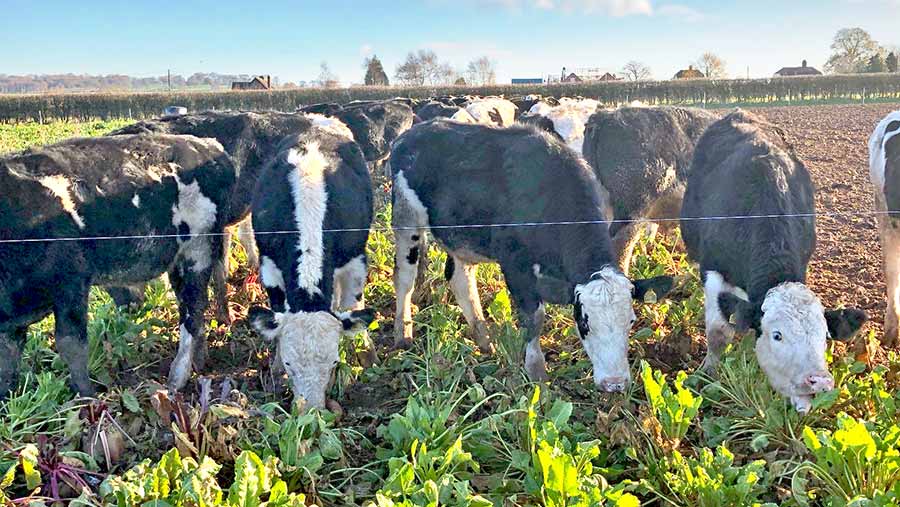 Forage-based dairy-beef systems are profitable even in extreme weather conditions, a two-year study at Harper Adams University has concluded.

The project investigated whether it was feasible to finish dairy-bred beef calves on forage alone by 21 months.

Led by Adas, funded by AHDB Beef & Lamb and supported by the Hereford Cattle Society and Dunbia, the study aimed to develop a blueprint for farmers wanting to finish dairy-beef animals predominantly on home-grown forages.

See also: How to set up rotational grazing on your beef farm

Even though animals failed to finish by the target date due to adverse weather, which affected growth rates, the study still delivered net margins a head of £99.94 and £113.98, with the Hereford crosses faring the best.

After achieving poor growth rates of 0.34-0.45kg on fodder beet last winter due to adverse weather conditions, cattle were turned back on to grass in April – a month later than anticipated due to the cold weather.

High levels of compensatory growth were seen in both breeds, with daily liveweight gains of 1.64kg/day and 1.76kg/day for Hereford crosses and Holstein-Friesians respectively recorded between 18 April and 5 July.

But little let-up in difficult weather conditions forced researchers to remove the animals from the 10ha grazing platform on 13 July as dry weather saw grass covers dip below 1,500kg DM/ha.

Instead, cattle were moved to 4.75ha of permanent pasture and didn’t return until 17 August, when trough feeding commenced just four days later.

This 14% crude protein beef nut was fed until the end of November, when the fifth batch of cattle were sold.

However, five remaining Holstein-Friesian cattle had to be housed for two weeks to achieve an adequate level of finish.

These were fed ad-lib grass silage and gradually transitioned on to maize silage, which was fed alongside 5kg of concentrates a head a day.

Cattle were sold to Dunbia in six batches, with the final group sent to slaughter on 10 January 2019.

What the study shows

Marc Jones, from Adas, who oversaw the trial alongside Simon Marsh, principal beef lecturer at the university and assistant farm manager Chris Ruffley, believes more farmers could achieve bigger margins between purchase and sale by emulating the study and buying calves at a younger age (126 days versus the AHDB finishing average of 441 days).

“By purchasing cattle at a younger age than traditional dairy-beef finishing systems, the aim is to generate a larger gross output, while controlling variable and fixed costs to increase profitability – even though the cattle are on farm for a much longer period before finishing.”

He said more beef finishers could also reduce their overheads by outwintering cattle and using grass and forage more effectively.

“The positive margins show the durability of the production system after some of the worst weather for 30-40 years.

“Initially, the very cold and late spring in 2018 [The Beast from the East] reduced cattle growth rates while the cattle were on the fodder beet.

“The cold weather delayed the cattle going to grass in the spring, while the extreme dry period and heat during the summer reduced grass growth through July and August, causing the cattle to lose condition and weight gain.

“Crucially, even after these challenges, the system is still profitable, even on rented ground, with paid labour and without subsidy or environment payments.”

But he stressed farmers do need to have a back-up plan to deal with adverse conditions and must weigh stock regularly to avoid having to house animals for a second winter.