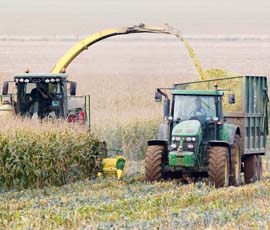 The free service, launched by KWS, uses local meteorological data to allow growers to compare the season’s crop progress and potential against a 10-year mean.

It is the first time data for this period has been made available.

Farmers need to enter their post code and the service then calculates the number of heat units the crop has received so far in the growing season.

Growers can then work out the likely harvest date according to the varieties’ maturity rating (FAO number).

Experts believe these figures reflect the fact some farmers may have lost confidence in maize and have switched to growing alternative crops.

“Having a 10-year average means you are not reacting to any one year and it gives you a long-term basis to judge a variety on,” he added.

He says the service is more precise than the NIAB maturity class system – which was withdrawn last year – because it is linked directly to the FAO number.

But Mr Burgess warned the calculator should act as a secondary confirmation to local knowledge.

“It tells people when they should be looking out for key changes in the maturity of the crop. If the temperature is way above average you need to consider looking at your crop more often,” he said.

This year in parts of the south-west and east of England fieldsmen reported early varieties had reached maturity before the end of August.

“We saw anomalies of 130% on average, so it’s been 30% hotter. This means the crop is moving very quickly,” he added.

You can access the calculator by going to www.kws-uk.com.