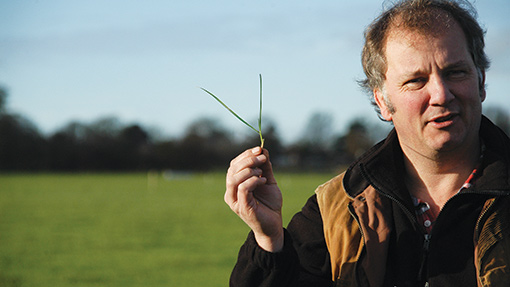 All good grazing managers know if grass isn’t being measured, it can’t be managed. But as confidence grows with grazing experience, complacency can set in. After a couple of seasons, the novelty of weekly recording using a platemeter wears off and “eyeballing” paddocks can be seen as simpler and quicker.

See also: Catch up on all the news from Grassland & Muck 2014

However, the discipline of measuring and recording grass growth accurately is essential to manage grass effectively at a high level, says DairyCo grass and forage specialist Piers Badnell (pictured above).

“Being confident allows you to cut corners,” he agrees. “Though you must accept the consequences. You will pay for it somewhere in either wasted pasture or excess supplement.

The Grass Value initiative, which is funded by the RDPE for Wales 2007-13, has involved 12 commercial herds in Wales for the past three years.


A further 27 herds joined this year. The initiative is being undertaken by the Dairy Development Centre and the Improving the Welsh Dairy Supply Chain project, which is jointly delivered by DairyCo.

“Measuring just by eye is fine when things are ticking along nicely. But losing control at peak grass growth means quality suffers and the rotation is affected for the rest of the season.”

The key is to be prepared for the growth surge, not be caught out by it once the weather conditions turn ideal. Furthermore, Mr Badnell stresses the importance of accurate figures when faced with an actual feed deficit – and warns of an approaching one.

Knowing exactly how much grass is growing and is available, ensures any supplementation is then cost-effective. And, although he admits not every dairy farmer wants to chase maximum profit, he says farms wanting to get bigger and better need to be on top of their grazing management.

“Without key information, it isn’t possible to increase stocking rates and, thus, output per hectare,” he adds. 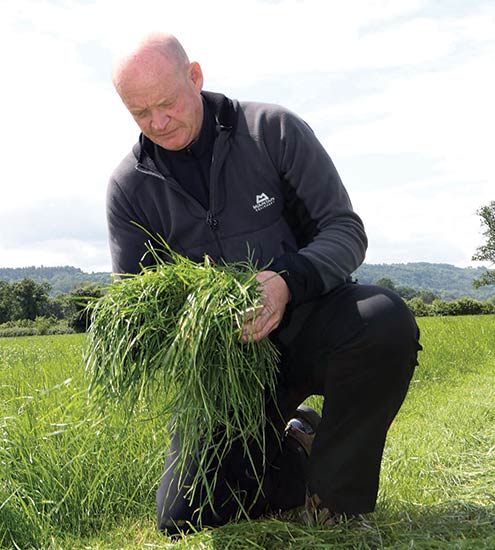 Last autumn proved this, according to results from the Grass Value initiative, which is funded by the RDPE for Wales 2007-13 and has involved 12 commercial herds in Wales for the past three years. “The general opinion was that, in Wales, the best autumn for years had made up for the poor spring.

“Our recording results demonstrated this was not the case. The weather was fine, grazing conditions were good, but this in no way made up for the poor spring.

“We found the farms were 2,000kg DM/ha down on their average yield in spring, yet only made up 300kg DM/ha in autumn,” he explains.

Initial findings also showed measuring grass on a weekly basis doesn’t capture 100% of grass growth. Paddocks growing the most are those with greater leaf area that are just about to be grazed. Unless pre- and post-grazing covers on every paddock are measured, they aren’t being included in total calculations.

“Recording grass covers less often exaggerates this effect and farms don’t know their total tonnage grown,” he explains. “We, therefore, recorded impossible utilisation figures in excess of 85%, when a more realistic figure is 75% to 80% due to natural wastage. We know these figures are correct, due to the amount of milk produced and feed bought in.”

While Mr Owen agrees experienced graziers could cut corners by only measuring once a fortnight in early season, he believes they should be platemetering twice a week at peak growth rates to be even more effective in cutting costs.

“It is possible to be suddenly caught out without the discipline of weekly measuring and get left behind as growth picks up and accelerates away,” he says.

Today’s technology means managing grass is easier than ever, with electronic platemeters and computer programs for the number crunching. “Twenty years ago it was all manual calculations and you had to design your own spreadsheets.

“There were very few programs to capture data and use it effectively, so I think it can be a bit of an excuse to revert to measuring by eye, as people fail to actually walk their paddocks,” he says.

“For me, it’s a discipline because I recognise the real value of it – inputs and outputs are critical – and I pencil in one day a week. There is no temptation to slacken off. To get the most out of recording it should be done accurately and on a regular basis. If not, you are wasting your time and run into management decisions based on assumptions, not facts.”

For those whose enthusiasm has waned or whose time is short, Mr Owen suggests delegating the task to a keen member of staff or even a paid outsider. “We are happy to pay people to milk cows and I think a farm can get just as much, if not more, return for their money by paying someone to measure their grazing.”