Last October, work to investigate the feasibility of a low-cost dairy beef production system was launched at Harper Adams University with the aim of maximising output from forage and minimising wintering costs.

The trial involves Autumn born Hereford cross Holstein-Friesian and Holstein-Friesian steers, and is being led by Adas and Harper Adams with funding from AHDB Beef & Lamb with additional and support from the Hereford Cattle Society and Dunbia.

It is the first trial of its kind for the university, which has traditionally operated intensive barley beef systems.

The aim is to finish animals by 21 months old – and therefore eliminate the costs associated with a second winter – using a rotational grazing system and outwintering animals on fodder beet.

Twelve months in and at the end of their first summer grazing period, it was time to visit the university to find out how the animals are performing.

After being dubious as to how animals would perform at the start of the trial, lecturer Simon Marsh and assistant farm manager Chris Ruffley say they are now grazing converts thanks to the promising weight gains achieved off grass alone.

For comparison, a separate group of 50 October-born Simmental and Blue cross Holstein-Friesians steers that have been set stocked on permanent pasture at another unit have only grown at 0.72kg/day. 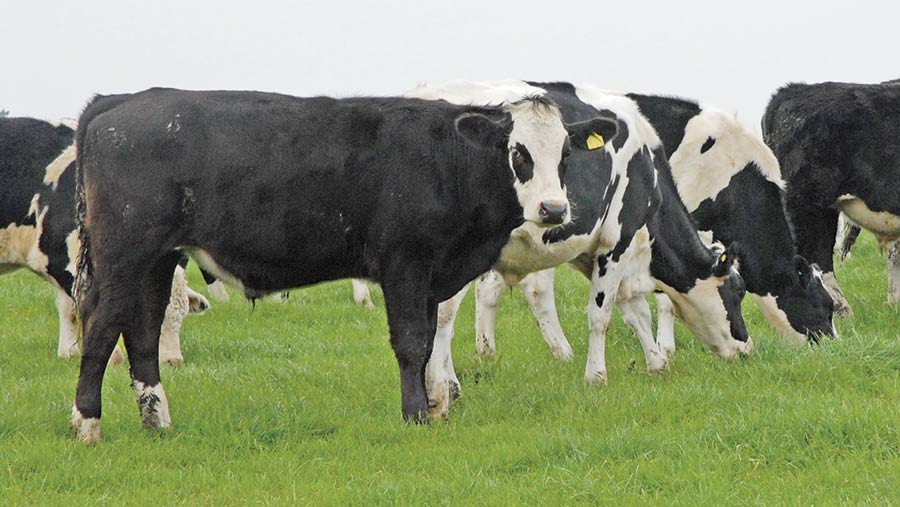 Although this rate of growth may not seem a lot, Mr Marsh claims it is “huge” and could be the difference between profit and loss.

“Over a 180-day grazing period, if cattle are growing at 1kg that equates to 180kg liveweight. But if they only grow at 0.7kg over the same period that leaves a difference of 54kg.

“Until now we have never considered grazing cattle at Harper because the land is more suited to arable and vegetable growing and the lack of profit associated with conventional grazing [set stocked] beef systems,” he says, acknowledging he is now a grazing convert.

“You talk about teaching an old dog new tricks; well I have learned a new trick, but it requires a totally different mindset.”

Grass growth and its impact on weight gain

Rotational grazing has seen the platform grow 12t DM/ha to mid-September with grass quality maintaining above 12ME.

However, in June, grass growth plummeted due to the dry conditions, with growth rates dipping below 20kg DM/ha in July for three weeks. To counter this, cattle were moved daily, reducing the rotation from three weeks to 10 days.

Adas consultant Marc Jones, who is overseeing the trial, says: “The soil dried out very quickly, because it’s a sandy loam, and in late June-early July we didn’t have any growth at all.”

He adds although the dry matter of the grass increased, intakes fell over this period because there was simply a lack of grass in front of the cattle.

This was reflected in late July and August when lower daily liveweight gains of 0.59-0.63kg were recorded across the group.

“The cattle looked well, but we didn’t realise growth had dropped until we weighed them,” says Mr Marsh, who adds this highlights the need for beef producers to weigh animals monthly.

“If you get a slightly below growth rate I don’t tend to panic because I’m a believer in compensatory growth.

“The time to worry is when you have two consecutive growth rate reductions,” he explains.

As predicted, growth rates climbed back up to 0.99-1.0kg by August, with grass growth increasing to above 80kg DM/day after rain in July.

Despite the volatility of the season, Mr Jones thinks that by the end of the grazing season the grazing platform will have grown 14t DM/ha.

“This is exceptional and is reflective of the good soil indices and the quality of the ley, which is fairly new, comprising intermediate and late heading perennial ryegrass and medium leaved white clovers from the Recommended Grass and Clover List.”

Because steers are grazing clean pasture, faecal egg counts have come back negative, which means cattle haven’t had to be wormed.

However, Mr Jones says the challenge will be greater next year because the cattle are returning to the same pasture they have grazed this year.

As part of the next phase of the trial, cattle are being gradually transitioned on to fodder beet where they will strip graze 4ha until early March with all the cattle finishing off grass by midsummer.

“The key will be to ensure the cattle meet the requirements of the marketplace in terms of weight and fat cover. The latter may be an issue with some of the Holsteins,” adds Mr Marsh.

Mr Marsh reckons the system is much more transparent than the barley-beef system because every penny is costed out on its own rather than borrowing from other enterprises, such as straw from the arable enterprise.

The system is predicted to return a higher profit, although only time will tell if this estimate is achievable.

If it is, it could mean a seismic change in the way beef calves from the dairy unit are finished at Harper Adams in the future.

“It will be the profitability that makes us decide what system to go for,” explains Mr Ruffley.

Mary Vickers, beef scientist with AHDB, says: “The results to date are encouraging but it is the bottom line that counts, so as well as recording the physical performance of the cattle, the system will be fully costed to see how profitability compares with other production systems.”

AHDB will be inviting producers to come and see the system in action at an open day planned for later this year.

Background on the trial

A total of 70 autumn-born steer calves – 35 Hereford cross Holstein-Friesian and 35 Holstein-Friesian – are on the trial. Having different breeds will allow researchers to compare the performance of these two breeds under the same conditions.

60kg calves were reared on milk powder and starter concentrate up to weaning at three weeks before gradually transitioning onto silage and a restricted concentrate diet.

Animals were turned out to a 12.4ha field on 3 April weighing 182kg on average. The field was split into 1ha paddocks using electric fencing with steers moved every two to three days depending on grass growth.