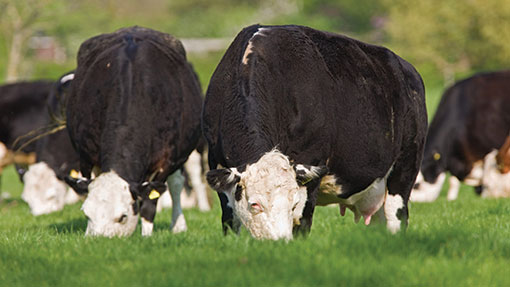 Recording the sounds cattle and sheep make when eating grass could help farmers calculate how much they are consuming and whether the diet is meeting the animal’s nutrient demands.

Scientists at Harper Adams University are developing a system which records the different noises made by livestock when they bite and chew grass.

Known as bioacoustics, the technology transmits the sounds recorded via a microphone on a cow’s head to a computer, which then translates them into data which can show the amount cows are eating, and the amount of grass they have left in a field.

Scientists hope the system will lead to more widespread-use of precision farming technology in conventional livestock production, enabling farmers to better-manage their grazing.

“For most farmers, managing grazing is an act of faith because they can’t measure it,” he said. “They have to guess when herbage availability has declined and intake has dropped. This system helps take away that guesswork.”

The technology involves a microphone picking up the different sounds made when they bite and chew grass.

“When you have a tall sward the animal takes a big bite, but has to chew a lot,” Dr Rutter said. “When the sward is short, they have to take many bites to get a mouthful, but then chew less.

“Research has shown the bigger the bite, the larger the chew, so we can estimate how much they are eating, as well as how much is available to them.”

“For most farmers, managing grazing is an act of faith because they can’t measure it. They have to guess when herbage availability has declined and intake has dropped. This system helps take away that guesswork.”
Mark Rutter, Harper Adams

Scientists also believe different plants have different acoustics, meaning the microphones can determine exactly what grazing animals are eating, and the nutritional quality of it.

Dr Rutter said there were some issues with the technology, as the microphones could also pick up the sounds of other cattle grazing. But combining bioacoustics with movement detectors offered great potential for monitoring feed variables.

And while precision farming technology had previously been restricted to arable systems or larger livestock units, bioacoustics could prove to be an economic technology for farms of all sizes.

“We have seen technology starting to have a big impact on managing intensive dairy systems, but there is no reason why it can’t be used on small farms too,” Dr Rutter said.

“We are not too far from seeing this being used on-farm as the technology is already available,” he added.

“A commercial collar has been developed in Israel, which measures ruminant behaviour and listens to what is happening to detect any health problems, and this system is simply a step on from that.

“If precision livestock technology is going to be used on a large-scale then we have to show that these systems are giving value. If we can help farmers utilise pasture it should give good returns.”