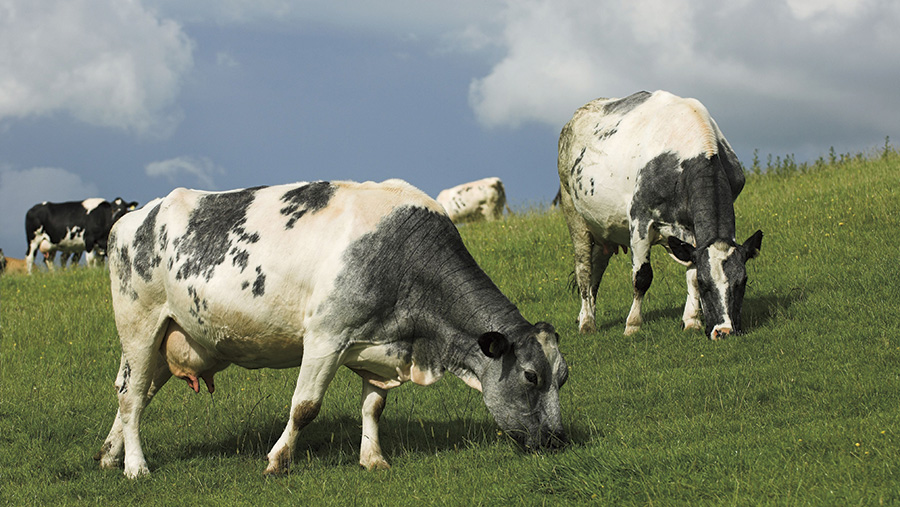 A new Higher Level Stewardship (HLS) scheme could change the way stock is grazed on upland areas, with farmers raving of the benefits of re-introducing cattle to upland commons.

The scheme, introduced by Natural England, is taking place on commons in Cumbria, north Lancashire and the Yorkshire Dales, with a supplement offered to graziers.

So far, 11 farmers are involved and The Farmer Network is collating data from five upland farmers involved in the county as part of a first-of-its-kind upland grazing trial.

The Farmer Network says the scheme has shown surprising improvements in performance from using grazing at more than 1,000ft, with some growing cattle achieving daily liveweight gains of up to 1.6kg.

What trial results show so far

“Where farmers have been grazing growing cattle we have been monitoring their performance.

“We have also been analysing the grass from rough grazing and comparing it with that of improved pastures,” says Kate Gascoyne of The Farmer Network.

A range of cattle – in terms of age and type – are involved.

Grass samples from rough grazing and from improved pastures on all the farms in the trial have been taken each month from May until September and again in October for comparative feed value analysis.

“After just one year we only have a snapshot of what’s happening.

“Because there was a wide age range and breed type within the cattle being monitored – from three weeks to 28-months – the daily gains were from 0.3kg to 1.2kg, but the highest daily gain was 1.6kg.”

“As anticipated the grass analyses showed that the D-value and ME were highest from samples of improved in-bye pastures but the results from the rough grass analyses were surprisingly good,” comments Ms Gascoyne.

“[In fact] some farmers felt there wasn’t much difference between the feed value of their rough grazing and their improved pastures.”

However, grass on in-bye land grew almost three times faster than that on the upland pastures, she concedes.

Growth rates recorded on one of the commons in July was 2.5cm in a three-week period while improved pasture grew more than double that at 6cm.

Results from the trial have been so positive that farmers have unanimously agreed to continue to analyse the grazing as the scheme progresses.

In fact, it is now a pre-requisite of HLS status on the 2,023ha Kinniside Common for farmers to graze cattle.

Ennerdale farmer Will Rawling, chairman of The Farmer Network, is encouraged by the results and even more so by the opportunities this now offers to upland cattle producers.

“This is a very new experience for this generation of farmers to graze cattle on the uplands and there wouldn’t be many who had done it in the previous generation.

“Natural England says the cattle are necessary to remove the rough vegetation and improve the upland pasture for sheep, but farmers have definitely been surprised at how the stock can benefit by being grazed on this land” says Mr Rawling.

Ms Gascoyne believes the data collected will change the way stock is grazed on upland farms in the future.

“Cattle are selective grazers and they do well on rough grazing as they seek out the best parts of the pasture to graze where there is less of a worm egg burden,” says Rumenco nutritionist David Thornton.

“They can’t do this as well when confined to lowland pasture.”

Ian Armstrong says putting dry sucklers on rough upland pasture on for the summer has improved fell grassland and has made a huge difference to the performance of the cows.

“The dry cows that went on to the commons grazing for the summer did fabulously well,” says Mr Armstrong.

“They calved down more easily and the held better to the bull.”

He attributes the improvements to their body condition. At turnout in May – to comply with the HLS prescription – the cows were in condition score 3-3.5. By the time they calved in late summer/early autumn they had dropped to 2.5-3.

Natural England’s decision to bring cattle back to these upland pastures gave Mr Armstrong the chance to graze 10 suckler cows on the enclosed 146ha grass fell, which is in the HLS.

“We thought at first it would be restricted to native breeds but were told our Limousins would be acceptable to graze on the common from May to October,” explains Mr Armstrong.

He says improved lowland pasture management over the years and the ability to make better silage has led to cows getting very fit – almost too fit.

“Sucklers these days easily put on too much condition and we end up with more calving problems. But cows on this rougher type of grazing have down really well.

“The aim is to get the cows to graze the longer, rougher type grasses and allow the better sward to come through for the sheep.

“All the cows were treated with a mineral bolus.”

Mr Armstrong admits he didn’t have a lot of confidence in the idea of turning cows out on to rough grazing at more than 1,200ft but has since has totally changed his opinion.

“We’ve been getting our suckler cows too fit but they perform better carrying less body condition and this type of grazing is ideal.

Normally these cows would be kept on in-bye grazing and home and just put on too much weight.

“And in addition the cows are paddling the gorse and bracken so they are improving the condition of the fell by treading out the invasive vegetation we don’t want.

“But just 10 cows on that sort of area is just a drop in the ocean. The results we’re seeing proves there’s an opportunity to graze this land a lot harder for the benefit of the common and the stock.”

The trial has been supported by The British Simmental Society, Rumenco, Natural England and Federation of Cumbria Commoners.

Can other hill farmers make the most of new Higher Tier (HT) agreements by extensive grazing cattle on uplands or is this just for the Cumbria grazing trial?

Grazing with cattle can often be a very useful way of improving the value of upland habitats for wildlife.

Natural England advisers can discuss with uplands farmers where cattle grazing would be a useful element of a HT scheme.

They can also advise on additional options to support cattle grazing in HT agreements, tailoring the options to outcomes for a particular place and the circumstances of the farm business.

What are the most important targets of the new HT?

The Countryside Stewardship scheme has several objectives but primarily focuses on wildlife conservation and water quality.

The scheme rewards farmers who will deliver the most for their local environment.

The details of specific local targets can be found on the Multi-Agency Geographic Information for the Countryside website.

How much money per hectare does it offer hill farmers?

The money available will depend on the options chosen.

How long do the schemes run for?

HT and Mid Tier (MT) schemes tend to run for five years, but some agreements, including those on common land, run for 10 years.

When does it open and how do you apply?

The HT application window (for agreements that would start on 1 January 2017) has closed for this year.