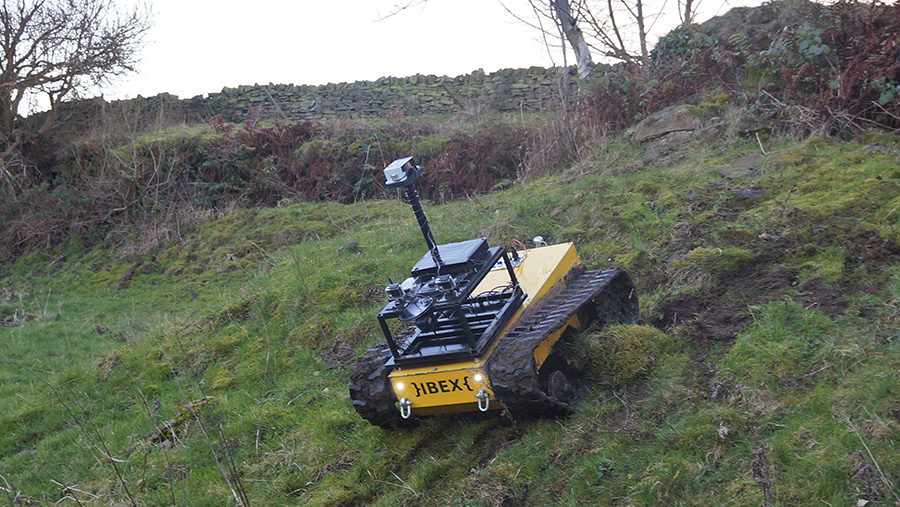 Designing farm machines that can work on steep slopes without falling over and injuring the driver has always been difficult.

However, the maker of the latest tracked machine reckons that it’s well on the way to achieving just that.

According to project manager Charles Fox, the Ibex “extreme mobility agricultural robot” can drive itself around steep grassland dairy and sheep farms identifying and killing weeds.

Co-funded by the UK’s innovation agency, Innovate UK, the Ibex robot claims to be able to reduce fuel costs and labour usage for farmers while reducing the environmental impact caused by bulk herbicide spraying.

Tasked with identifying and destroying encroaching weeds on remote hillsides that are uneconomical to spray manually or too dangerous to drive on with a tractor or ATV, the Ibex can safely traverse slopes up to 45deg through mud and thick vegetation, including bracken.

“Ibex is the first agricultural robot designed to tackle extreme agricultural environments such as Yorkshire hill farms,” says Dr Fox, who has been testing it on his family’s Hunshelf Hall Farm, Wortley near Sheffield.

“Taking the concept beyond university labs and overcoming extreme terrain mobility limitations, we designed and built the Ibex to military standards, to go where other vehicles can’t operate and to tackle a real-world problem affecting many farmers around the UK.”

Charles Fox with the Ibex

Each requires around £1,000 a year to spray manually at £8/hour, a cost which is increasing rapidly.

“Immigration restrictions and health and safety requirements mean this cost is now too high for many farmers to justify spraying at all, resulting in many fields being 10% or more weed-covered, reducing grazing available for animals and consequently increasing food costs to the consumer,” says Dr Fox.

The Ibex robot is designed to operate on 45deg slopes and traverse hill farms autonomously and two cameras and on-board sensors keep it stable over all terrain.

The system is said to be capable of independent navigation, covering a user-designated area optimising the routes.

A video and data link is always active, allowing a supervisor to intervene if required or if the control systems decide that user input is necessary.

An on-board sprayer with robot arm is said to give  precise spraying.

The system is also capable of carrying payloads and pulling implements and the operate for up to a day away from its operating base.