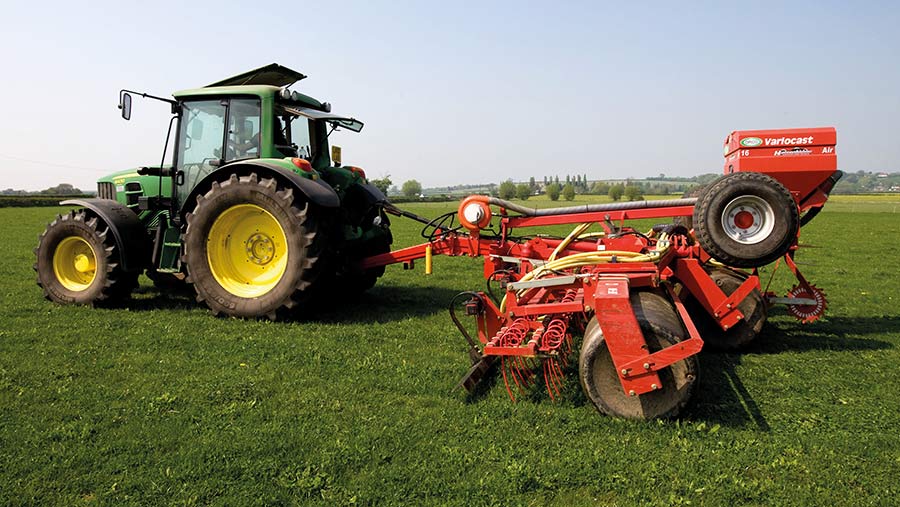 White clover’s ability to fix the equivalent of 150-250kg nitrogen/ha (60-100kg/acre) means many farmers are planning on overseeding it into swards this season to help protect themselves against N fertiliser costs of about £650/t.

White clover’s soil fertility building capabilities and drought tolerance also increase its attractiveness while its high protein content and digestibility mean it has a role to play in boosting home-grown forage quality and reining in feed costs.

However, before reaching for the seed bag, he says it’s important to take the time to do it correctly.

“You can’t just do it and expect clover to perform; you need to change your mindset and manage the clover,” he explains.

Helen Mathieu, area sales manager for Germinal GB, also says there are a “few rules” to follow to ensure the best performance when overseeding white clover.

See also: How to get the best from red clover in grassland

Soil fertility and health must be good. Soil phosphate (P) and potash (K) indices need to be at least 2, while clover likes a soil pH of about 6.5, says Dr Fisher.

Clover also doesn’t like soil compaction, so it is important this is addressed first. Use a spade to dig into the soil and assess the structure.

If there is deep compaction, a full plough and reseed may be required (see “Deciding whether to overseed or plough”).

2. Soil temperature and moisture must be right

Soils need to be 10C at 10cm depth when clover is drilled. When this is reached will vary depending on geographical location.

In England and Wales, between spring and mid-September may be possible. Further north, mid-August may be the cut-off time.

Ms Mathieu says timing will depend on how open the leys are. She says it’s important to avoid overseeding clover during peak grass growth, as the grass will outcompete it.

With this in mind, she suggests waiting until mid-June to July and overseeding after grazing or cutting. She also advises drilling no later than mid-August.

Soil moisture is also key to success, so clover shouldn’t be introduced unless soils are moist and rain is imminent.

It is important weeds are under control because they will outcompete the clover before it can establish.

Limitations in the availability of clover-safe sprays add challenges to the control of weeds in clover-rich swards so a full reseed may be appropriate in leys with more than 20% weeds (see “Deciding whether to overseed or plough”).

For grazing swards, opt for small- to medium-leafed white clovers. For a silage mix, choose medium- to large-leafed varieties. Always select varieties on the Recommended Lists as these will have been bred using the latest genetics with the best yields and consistency.

To achieve good establishment, good seed-to-soil contact is a must. On grazing ground, graze down to less than 1,400kg DM/ha to help open gaps in the sward and then oversow the clover.

On silage swards, wait until after first or second cut. Cut down to 4cm or take a normal silage cut and then turn animals onto it and graze it down to this target.

A light harrow or roll is recommended for good seed-to-soil contact.

Clover seed can be stitched in using a seeder and harrow. The harrow will help with seed-to-soil contact, which is why Ms Mathieu identifies this as her preferred method on existing swards.

Broadcast seeding could also be an option. Dr Fisher says this can be done using a fertiliser spreader with P and K.

However, because of the different sizes and weights of the clover and fertiliser, he suggests mixing in the field and applying only an acre at a time.

This will reduce the risk of the clover being shaken to the bottom.

Ms Mathieu urges caution when broadcast-seeding on existing swards as there is a risk the clover seed will sit on top of the grass leaf.

She advises overseeding with no less than 3.7kg/ha (1.5kg/acre) of white clover seed on newer, open swards where good seed-to-soil contact is likely.

They note that using the higher rate on a more open sward can lead to a very high clover content.

Once the clover has been introduced, the sward should be grazed down to ensure sunlight can reach the base.

To make the most of clover’s nitrogen-fixing capabilities, farmers need to have the “courage of conviction and manage the sward for nitrogen fixing”, says Dr Fisher.

“If we use clover, we need to recognise that we need that clover to fix nitrogen. We need to avoid putting on nitrogen from the bag in the growing season,” he adds.

It is possible to apply nitrogen at the start of the growing season as clover growth kicks into gear later than grass.

If cows are going out in February, 30-50kg N/ha (12-20kg/acre) could be applied at first application, according to Dr Fisher.

“You can do that to stimulate grass growth in the sward for the first round of grazing, but don’t be tempted to keep going as you’re defeating the object of the clover,” he adds.

One of the main “hiccups” on farm is continuing to apply 250kg N/ha – which may be right for the grass but is not right for clover.

Applying too much nitrogen will stimulate grass growth which will then outcompete the clover.

Deciding whether to overseed or plough

When to overseed clover