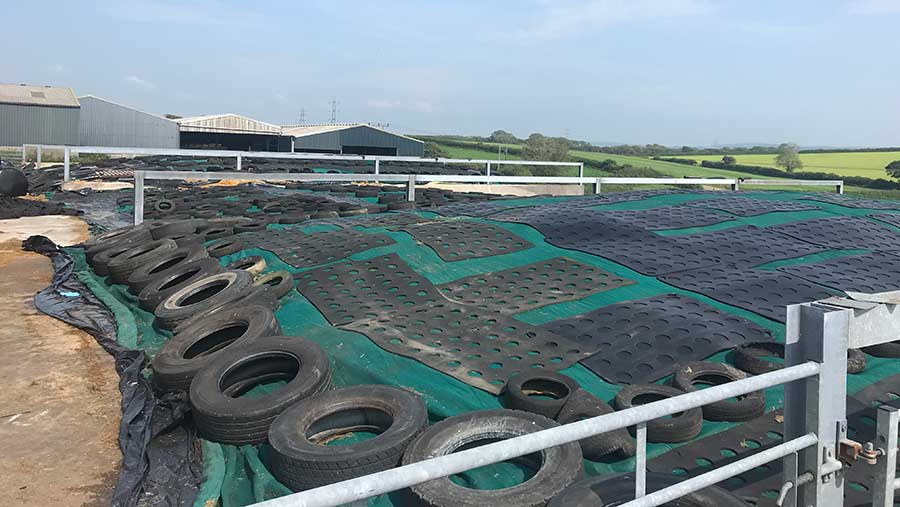 A video on Twitter showing a deadly brown gas escaping from a freshly clamped silage pit has sparked a health and safety warning, after the gas was identified as the highly dangerous Nitrogen Dioxide (NO2).

The video, uploaded by a farmer from west Wales, showed the gas lingering around the bottom of the clamp less than 24 hours after the grass was ensiled in the pit.

The farmer, who wished to remain anonymous, told Farmers Weekly he had never seen anything like it before, but had seen similar reports on social media in the past 12-18 months.

See also: What causes silage clamp slippage and how to avoid it

He harvested 140 acres (56ha) of third cut silage on Saturday (8 August) and picked it up on Sunday (9 Aug), but did not ted the grass for a fear it could end up too dry due to the extremely high temperatures at the weekend.

The farmer said the grass was wetter than he had hoped for at 23% dry matter (DM) but preferred that to it being too dry.

On Monday (10 Aug), he went to finish off sheeting and saw a big bubble had appeared and brown gas was seeping from the bottom of the pit.

He said: “As soon as I saw the gas, I moved away from the clamp and have since left it. The gas had a really strong acid smell.

“I have kept away from the pit and will leave it for a couple of weeks until I know it is clear,” he added.

He harvested third cut in two stages with the first crop of third cut taken eight days before the second (on 31 July). A pre-cut sample on that grass prior to harvesting was fine, so a further test was not performed on the second.

Nitrogen was applied at the start of July and the farmer believes the mix of sunshine and showers in the eight days between cuts meant the nitrates were brought up into the plant.

Silage expert Dave Davies from Silage Solutions says it is not uncommon to see nitrogen dioxide, but it is an issue usually seen in first-cut silage.

He said weather patterns going from one extreme to another means nitrogen is not being used efficiently and can result in excess nitrate in a plant. He explains what causes it, how to prevent it and the risk it poses.

Nitrogen dioxide is extremely dangerous and can kill animals and humans. It is produced from free nitrates (non-protein nitrogen in the crop) and is generally residual fertiliser nitrate.

It is more likely to happen when silage is made well but where you have residual nitrogen in the crop.

Once in the clamp, nitrates react with organic acids and turn into nitrous acid. As the temperature increases, during fermentation, nitrous acid is converted to nitrogen dioxide, which is a brown gas.

Inhalation can lead to severe irritation, inflammation, and burns to the nose, throat, and lungs. A person can collapse and die within minutes of inhaling silo gas.

Nitrogen dioxide can also be clear in colour and is heavier than oxygen, so it can displace oxygen, making it particularly dangerous as a person will have little warning before they are overcome.

A tell-tale sign nitrogen dioxide is an issue is when the silage appears bleached.

If you see any bleached silage within the first couple of weeks of it being in the clamp do not touch it as it will burn. After this time, it should be fine.

Can you feed the silage?
After two to three weeks the pH in the clamp will begin to rise. If farmers need to open the clamp quickly, they can do a pH test. If it is 3.5-3.6 then it is fine to feed.

The silage may have high nitrates in it when it comes to feeding and this can affect rumen bacteria and can be absorbed into the blood. Once in the blood it can combine with haemoglobin, affecting oxygen levels. Farmers experiencing issues should get nitrate levels tested using a wet chemistry test.

An overload of ammonia will send the pH high and will kill rumen bacteria and you will end up with cows with loose stools and poor milk production.

How can you prevent it?
The best way to prevent nitrogen dioxide is to pre-test grass just prior to cutting. Anything above 2% nitrate in a pre-cut fresh matter sample is high.

If the grass is ready to cut and conditions are right, there may be no other option than to harvest. You just have to be aware of the potential issues and take care.

It may be worth looking at nitrogen application going forward and how nitrogen is being used by the plant.