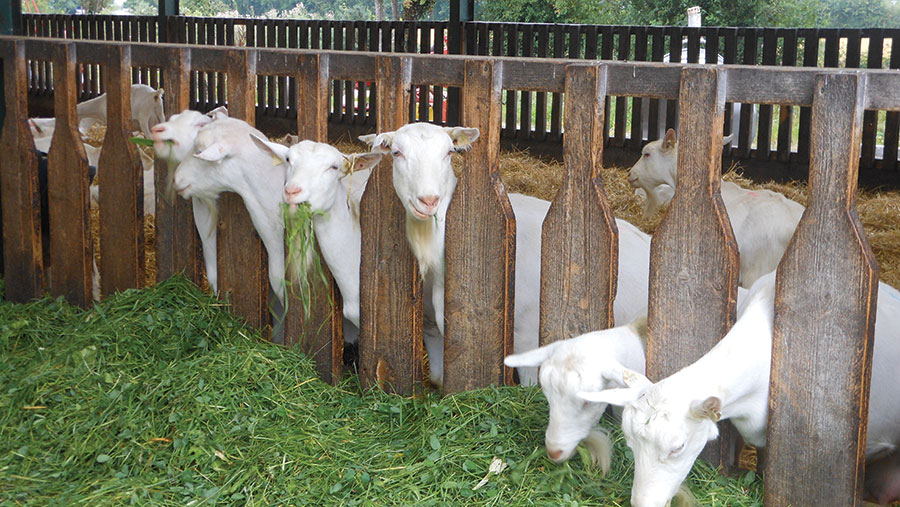 Together, they milk 200 British Saanen and Toggenburg-cross goats near Portumna in County Galway, pasteurising and processing the milk on farm to produce Killeen Farmhouse Cheese.

When they first established the herd, they turned the goats out to graze, but quickly learned that goats don’t like rain, and the risk of parasite infection at grass is very high.

So instead they opted for a “cut-and-carry” system. Mr Knippels says it delivers the benefits of feeding high-quality grass in a housed system.

With only 18.2ha of 28ha in total farmed around the farmyard, it also enables him to fully use off-lying ground.

The zero grazing window mostly runs from 15 April to 15 October, but good weather last year extended the period from 22 March to 25 October.

“When the land is too wet, we stop cutting. That mostly happens after 15 October,’’ Mr Knippels explains.

He takes a 2.7m front-mounted mower and tractor out each morning and, using a pick-up wagon, cuts enough grass for that day. The amount varies from 0.2-0.4ha.

Grass varieties are selected for spring growth – Mr Knippels constructs his own mix, which contains high levels of white clover.

He previously included chicory, red clover and herb mixes, but persistency was a problem.

No bagged nitrogen is applied on the fields – only farmyard manure.

Mr Knippels doesn’t measure growth, relying on a visual assessment to work out which fields to cut.

“Sometimes we take a field or half a field out of the rotation to cut as haylage if the grass has got too strong,’’ he says.

At the height of summer, he cuts to feed at 10am, when the dew has lifted and the sugar in the grass is rising; this provides the goats with sufficient feed until the following day.

The time taken to cut depends on the location of the field. “It takes about half an hour if the fields are around the farmyard and 45 minutes or so if it is one of the off-lying fields,’’ says Mr Knippels.

A conveyor belt system at the back of the pick-up wagon deposits the grass from the wagon in the feed passage.

“They don’t like it when the grass is packed too tightly in the feed passage either; they like it fluffed up.’’

During the winter, goats are fed haylage.

When the herd is on the winter ration, each goat averages a daily milk yield of three litres from 1.5kg of concentrates.

But when the herd switches to the zero grazing ration, milk production lifts to 3.5 litres a head from just 1kg of concentrates.

This means they can save 0.5kg of concentrate an animal and get an extra 0.5 litre of milk. However, additional straw bedding is needed when fresh grass is fed to keep stools firm.

Downsides to the system 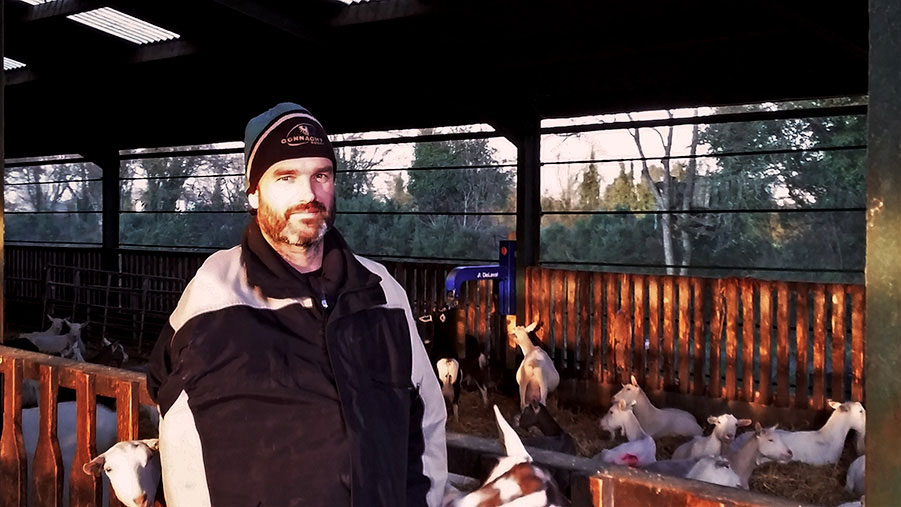 The downside to feeding grass is the variable dry matter.

The milk is used to produce a Gouda-type hard cheese that relies on a very high dry matter feed – 40-50% dry matter.

“We had a full month last winter when the cheese failed because the feed was too wet. It is a specific problem with Gouda and those type of cheeses,’’ explain Mr Knippels.

Mr Knippels explains: “They make spores, so they survive pasteurisation. The bacteria starts fermenting in the cheese a few weeks after it is made, causing late blowing.

“It creates too much gas during the cheese maturation and this affects the texture and flavour.’’

“It would have been a high capital expense if we had bought everything new,’’ he admits.

Mr Knippels says zero grazing doesn’t suit every farmer or system – it can be difficult to manage the grass and it requires more straw bedding than feeding haylage, he says.

“It is not for everyone. It takes a couple of years of learning to get it working right.

“Grass grows unbelievably well in Ireland, so it needs to be managed correctly. If the grass is strong, milk production will be down.’’