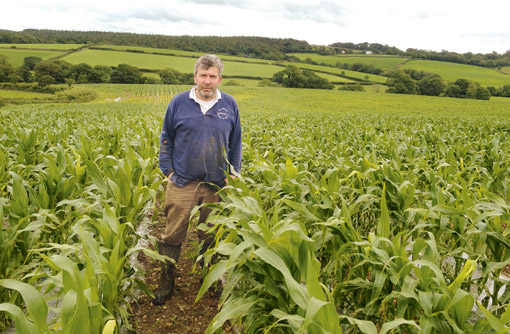 “I had attended the Maize Growers Association conference the year before and had seen a presentation on ground ear maize. It appealed to me as a way of conserving some of our starch requirements,” said Mr Allin, who runs a herd of 300 Holstein Friesians at Fernhill Farm, Clawton, near Holsworthy.

He had been feeding rolled wheat but saw an opportunity for an alternative when a standing crop of maize was offered for sale 10 miles from his farm. “It worked out as a lower cost alternative to wheat,” he recalled.

The forage is produced by ensiling maize cobs – leaves, husks and grains – plucked from the plant by a grain maize header mounted on the front of a forage harvester.

The forager, fitted with a corn cracker, chops the cob, processes the grain and applies an additive to minimise aerobic spoilage in the clamp. The maize plant stems are chopped and spread over the soil.

Ground ear maize can be clamped in a similar way to maize silage but consolidation and sealing needs to be spot on.

Mr Allin says the product is ideal for dairy famers as the processing is done by the forager, negating the need to crimp on the yard. Ensiling is one operation and the maize can be harvested earlier than a combinable grain crop.

In the first year he grew it, Mr Allin harvested in late September at 45% dry matter (DM) and yielded seven tonnes an acre.

Last year he sacrificed some yield for a higher DM. “We had more confidence that the product was very stable so we went for a higher dry matter and the crop yielded five tonnes an acre,” he says.

The crop has provided him with a high energy, high-fibre feed. The herd at Fernhill is fed a TMR ration.

“Ground ear maize is another tool in the box for feeding cows and because this product takes the whole grain it provides fibre in the ration as well as starch,” says Mr Allin.

“We would be buying in fibre to add to the diet but this product has reduced the need for this. We like it as a feed and because it is a bypass starch it is a little softer on the rumen allowing us to feed higher levels of starch. It matches well with the whey permeate that we feed.”

Mr Allin uses a crimp additive from Agrinexus on the crop to stabilise it at feeding, particularly during the summer. This also allowed him to move and reclamp a silo from an off-lying farm used in the first year.

The growing process for ground ear maize is no different to the agronomy and production of forage maize but a high grain yield and good grain maturity is required for successful results.

To assess the correct time for harvesting, a peeled cob should be gripped between both hands and twisted. If the grain rattles it is ready for harvest.

Attention needed in the clamp

Andrew May, of specialist forage additive company, Agrinexus, says a typical yield for ground ear maize is seven tonnes an acre at 55% dry matter. This would break down into 70% grain, 15% cob and 15% husk and shank.

Particular attention is needed to successfully clamp this material. Mr May suggests: