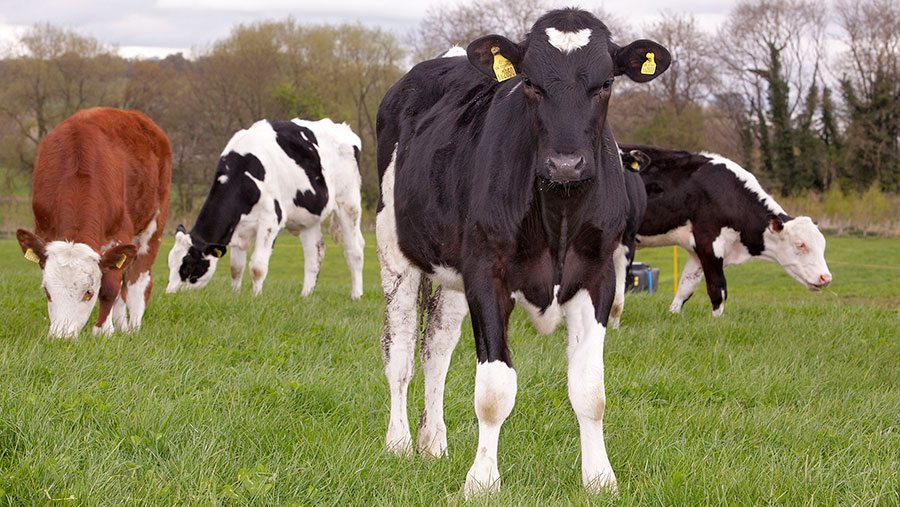 In a trial that is a first of its kind, Harper Adams University is investigating whether they can finish dairy-bred beef from forage-based diets by 20-21 months.

It is hoped the project, which is being funded by AHDB Beef and Lamb and supported by the Hereford Cattle Society and Dunbia, will create a blueprint for a low-cost beef finishing system for summer- and autumn-born calves.

Over the next 12 months Farmers Weekly will be following their progress.

In the first article Rhian Price visits the university, where the trial is being undertaken, to report on the results with calves now turned out for their first summer grazing.

Beef and dairy bred steers are going to be challenged to put on 1kg per day from forage without any concentrate supplementation while at grass in the latest finishing study carried out by Harper Adams.

The pioneering project will finally give farmers an insight into whether dairy-bred beef animals can pack as big a punch as their suckler contemporaries on extensive forage systems.

With ever-changing and increasingly challenging markets, Harper Adams’ beef cattle specialist Simon Marsh recognises there is a need for the university to broaden its scope.

“It is a completely new concept for the university, which has traditionally run intensive barley beef systems for more than 40 years,” says Mr Marsh.

“With recent volatility of cereal prices and some market resistance to young bulls it is important to create a blueprint for a sustainable, profitable ‘calf to beef system’ that will not be reliant on price changes in feed. We are having to adopt a completely new mind-set,” he adds.

About the trial: rearing and pre-grazing

Key measurements during the trial

The trial began in October, when 70 autumn-born steer calves, weighing around 60kg liveweight at 25-33 days old, were purchased from a range of farms.

Calves were reared at RSK ADAS consultant Marc Jones’s farm in Powys before being moved to Harper Adams in January at approximately 14 weeks of age.

In week three they received a whey-based powder only, fed at two litres once a day (400g CMR) up to weaning at week four. Alongside milk, calves were offered ad-lib straw and starter concentrate.

Once at Harper, steers gradually transitioned onto a silage and restricted concentrate diet.

At Mr Jones’s farm the calves had been eating 5kg of concentrates alongside straw so it needed to be a gradual transition down to 2.6kg of a 20% rearer nut and big bale silage.

The big bale silage had a protein content of just 10.2%, hence the requirement to feed a 20% CP nut. This was changed  to a 14% CP nut fed at 2kg a head a day at turnout on the 8 March onto grass, when calves were given access to a pasture adjacent to the shed.

On 3 April, they were moved into a 10ha paddock grazing system, with paddocks split into 1ha using electric fencing.

The 10ha, which is sown with a mix of perennial rye grasses, received a dressing of urea in March spread at a rate of 30kg/ha. After most grazings, slurry is applied at 30m3 per ha.

To control grass growth some paddocks are already being shut up for silage and these bales will then be fed to the calves when they are over-wintered on fodderbeet later this year, so the whole block is self-sustaining. 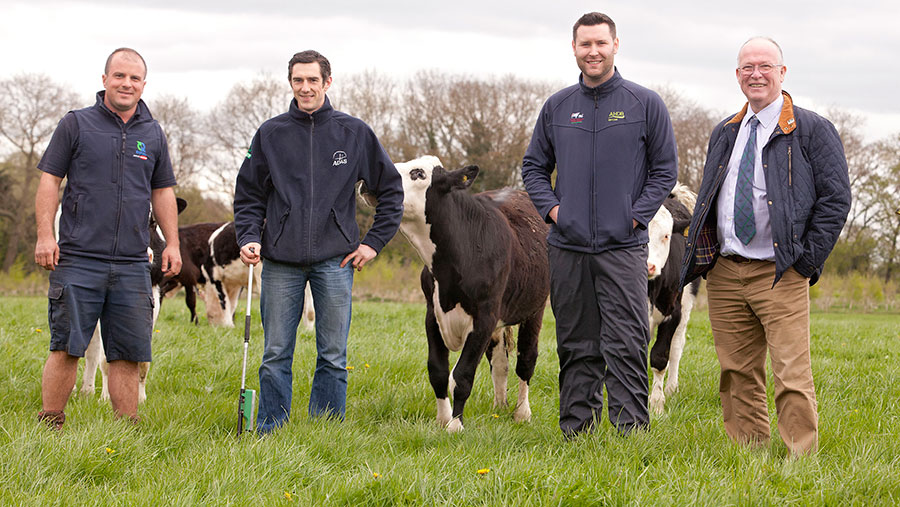 ADAS’s Mr Jones, who is overseeing the trial alongside Mr Marsh and assistant farm manager Chris Ruffley, says next year they will be able to better control grass growth by setting up a leader follower system when another 70 calves are introduced to the trial.

Not only will stocking rates be increased but grass utilisation, too, as older animals can follow younger ones and really clean up pastures, he adds.

“The target will be to achieve a DLWG in excess of 1kg throughout the grazing period.

“Most beef producers achieve this in the first half of the grazing season but often it goes pear-shaped in the second half with variable grass quality and ends up with overall summer DLWGs of just 0.8kg,” says Mr Marsh.

Throughout the trial calves will be weighed monthly and grass covers measured weekly using a plate meter by Mr Ruffley, who manages the calves on a daily basis.

Results so far have shown:

“The black and whites don’t seem to have the natural ability to graze, which is maybe the trait of the Holstein,” says Mr Marsh.

“At the end of the day we will find out if they can cope with this system, but may have to resort to the feed bag to get some fat cover,” he adds.

The aim is to maximise growth rates and reduce finishing age to 20-21 months by strip grazing cattle on 4ha of fodderbeet from November to March. The steers will then be re-introduced to the paddock grazing system next spring.

Maximising growth rates on fodderbeet will be key to finishing them quickly off grass and avoiding another winter – something Mr Jones says can kill profits.

“The third winter can add on £200-300, which would wipe out our profits. At the same time the cost of out-wintering in the growing phase will be half that of housing,” says Mr Jones.

They hope to finish all animals by June 2017 at 320-340kg carcass weight and a fat class of 3-4L, with everything sold deadweight to Dunbia. Meat tenderness, colour and pH will be measured, too, by Dunbia.

The university also has a group of 50 October-born Simmental and Blue x Holstein-Friesians, which would normally be finished as bulls but have been castrated. They will be grazed this summer (on a different unit) and then brought inside in October to finish at 16-18 months old on either ad-lib cereals or 50:50 cereals:maize silage.

“It will be interesting to compare these two systems, as well and look at the variable and fixed costs,” notes Mr Marsh, who aims to make a net profit of £200-300/head from the extensively finished calves, with concentrate only offered to tail-enders.

“We are basically stripping out all the major costs associated with beef production and maximising DLWG on cheap high-quality forage. If we don’t make a decent profit with this system – no one will.”

Key stages in the trial