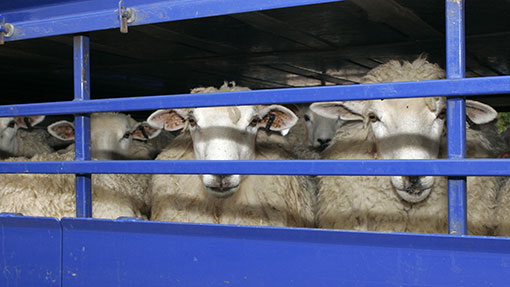 A judge has ordered a livestock export company and its director to pay £19,000 for their role in an incident at Ramsgate port which led to the death of more than 40 sheep in 2012.

Mr Lomas, 69, of Kettering, Northamptonshire, was given a six-month prison sentence, suspended for 12 months, during sentencing at Dover Magistrates’ Court on Thursday (13 February).

Two French lorry drivers involved in this case – Gerard Andre and Dimitri Dessaud – failed to appear in court and did not enter any pleas.

The judge found both men guilty of causing unnecessary suffering to animals in their absence. Sentencing was adjourned until 17 March so they can make personal representations in court.

Earlier, the court heard that a lorry, which had travelled from Kettering to Ramsgate, had come to the attention of RSPCA inspectors, who noticed sheep’s legs sticking out of the ventilation grilles.

Some 548 sheep were unloaded from the lorry after the charity’s inspectors noticed that two of the animals were lame or hurt, the court heard. One sheep had a broken leg and another was considered to be lame.

After the sheep were unloaded, RSPCA inspectors put down 43 of the animals in September 2012 after inspectors judged them to be lame and unfit to travel across the Channel. A further three sheep subsequently drowned after falling down a manhole cover.

Speaking outside the court after sentencing, KCC Trading Standards manager Mark Rolfe said: “We brought this case because live animal exports is a trade in which the people involved have a duty to take proper care of the animals involved, and when we are aware that this does not happen, we take appropriate action.

“It is clear that if you are a trader or transporter you have a legal obligation and strict liability to ensure the welfare of your animals is guaranteed and unless a trader is able to do this it is better for the them to go with the carcass trade.”
Gavin Grant, RSPCA chief executive

“We are totally independent of any other agencies or organisations with an interest in this case, including Thanet Council, the RSPCA and the AHVLA.

“Our only concern is the enforcement of the regulations relating to the condition and treatment of the animals and the transportation used. We brought this prosecution because of failings by the operators in this case and are satisfied with the outcome.”

Gavin Grant, chief executive of the RSPCA, said: “The RSPCA is pleased that justice has now been done and that the horrific nature of this trade has been exposed. It’s time this dire trade was examined by Parliament.

“The 40 sheep that died that day were badly let down by all those responsible for them. They were loaded into a dangerous lorry and trapped their legs causing broken and dislocated bones. When vets examined the flock they discovered many more not fit to travel because they were suffering from painful conditions such as foot-rot.

“It is clear that if you are a trader or transporter you have a legal obligation and strict liability to ensure the welfare of your animals is guaranteed and unless a trader is able to do this it is better for the them to go with the carcass trade.

“This case shows that even in a journey lasting a matter of hours sheep can suffer injuries and the vehicle used here was clearly inadequate as so many sheep had their limbs trapped and suffered horrendously.”

He added: “RSPCA inspectors on duty that day had to deal with the horrors of putting these poor sheep out of their misery. They described it as the ‘most awful day of their working lives’ but I’m pleased their actions were commended by vets present on the day and that they have received unwavering support from the community.

“Our inspector’s compassion, professionalism and dedication has been vindicated. Those that have attempted to smear them and the RSPCA should be ashamed.

“The live export trade is inherently cruel and we will redouble our efforts to stop it. If meat needs to go to the Continent then it should be on the hook, not on the hoof.”

David Bowles, head of external affairs, added: “We welcome the judgement by District Judge Justin Barron that hauliers have strict liability for the welfare of the animals they are transporting. If the animals are injured they are responsible.

“We believe it is absolutely right that the buck stops with the very people who are making money out of this misery.

“We hope this conviction sends out a very strong message to the handful of farmers and hauliers involved in live exports that welfare of animals is paramount. There now needs to be an urgent review by the Environment Food and Rural Affairs Select Committee of MPs into this whole trade.”