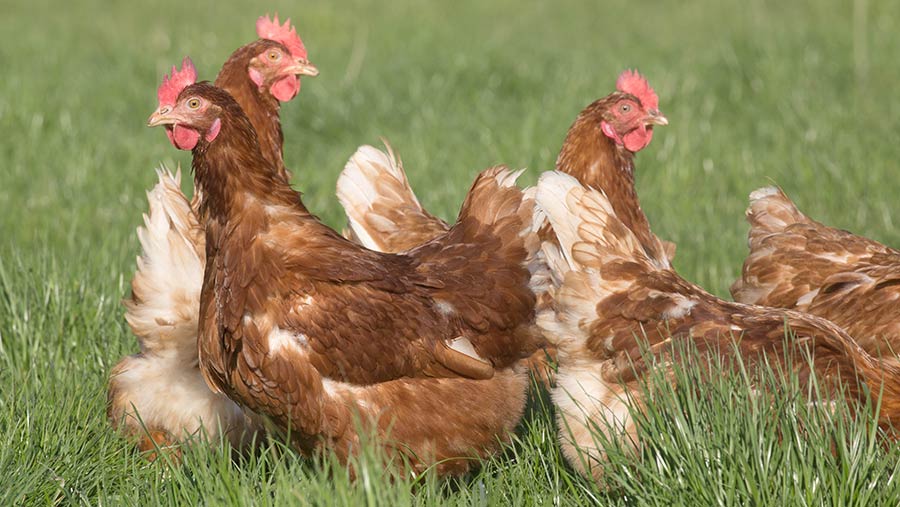 Vets are urging poultry flock-keepers to take precautions against blackhead after a warm, wet summer saw a rise in the number of cases.

The economic effect of an outbreak can be severe, she warns. “On some units, the whole flock may have to be humanely destroyed on welfare grounds.”

Poultrykeepers must be extra vigilant for the earliest signs of the disease and should take steps to keep it out of flocks.

The causes of blackhead

The disease is caused by Histomonas meleagridis, a single-celled organism known as a protozoan, which infects chickens, turkeys and game birds such as partridges, pheasants and quail.

It typically causes damage, seen clinically, to the liver and a part of the intestinal tract called the caeca, explains Miss Brewer.

In chickens, livers often have classic “nailhead” lesions, and the caeca may become ulcerated as the protozoa damage this part of the intestine first. As well as ulcers, caecal cores may be seen in more advanced cases at post-mortem.

This is an accumulation of dead blood, inflammatory and intestinal cells, that have a cheese-like appearance.

Damage to the liver and caeca usually results in secondary infections of bacteria like E coli. This can lead to septicaemia or blood poisoning, causing mortality in hens and turkeys, Miss Brewer says.

Symptoms of the disease

“The name blackhead is really a misnomer, as the phenomenon of an infected bird developing cyanosis or a black head is rare,” says Miss Brewer.

The main symptom is usually sudden death due to a secondary bacterial infection such as E coli, so the disease is most commonly identified by the vet at post-mortem.

Unfortunately, outward signs in the live bird are not obvious, particularly when the disease is in its early stages.

However, poultrykeepers should look out for birds that are hunched and depressed, or have diarrhoea or abnormal yellow droppings. There may also be a decrease in appetite and reduced weight.

What to look for

This summer has been wet and warm, which generally results in increasing worm burdens and it is the worms that carry the histomonas parasite.

“It means we tend to see blackhead more frequently in free-range chicken and turkey units where poultry worms can accumulate,” says Miss Brewer.

In contrast, it is rare for conventionally housed turkeys to succumb and, where it does occur, it is often down to a breach in biosecurity, such as water ingress.

The disease is also more likely to arise on newly established farms, in refurbished housing or where the unit has been taken over by an inexperienced manager who is unaware of the condition.

Most flock keepers, once they have witnessed an outbreak of blackhead, put preventative measures in place to reduce the risk.

Lifecycle of the pathogen

Blackhead has a complicated lifecycle. An intermediate host – the caecal worm – is usually involved in the transmission of disease.

The bird ingests the caecal worm heterakis, or its larvae or eggs, which have been infected by the blackhead protozoa.

The protozoa then leave the worm and invade the bird’s caeca and multiply. Protozoa can leave the gut either through the blood or through the intestinal wall, causing liver damage.

Once the protozoa are in the intestines, they can infect any caecal worm eggs present. The protozoa in the worm eggs are excreted by the chicken and may go on to infect other birds.

Unfortunately, the blackhead protozoa can become encased in the caecal worm egg, where they are protected and may remain viable in the range for several years.

There is no vaccine for blackhead, but it is worth implementing prevention strategies on farm. In addition to the tips below, there is also evidence that adding oils such as oregano-based products to feed or in water can be helpful in reducing the incidence and severity of disease in some cases.

If the disease occurs, it is usually the secondary infections that are tackled, and a stringent worming control is implemented.

1. Egg counts
The main control point is to keep worm burdens as low as possible by regular egg counts and the use of licensed worming treatments – flubendazole or fenbendazole.

2. Pasture control
Paddock rotation for free-range flocks may help by lowering parasite burdens. However, land constraints and adopted systems mean many free-range units are unable to do this.

“We always recommend that the range is well drained and regular maintenance of drainage systems, particularly on heavy soil, will help to reduce the likelihood of standing water.

If the range does get muddy and wet, particularly in warmer conditions, the protozoa will thrive.

Puddles allow birds access to dirty drinking water, increasing the risk of introducing a bacterial infection that will add to the severity of any blackhead outbreak.

Moist soil also encourages other worms to come to the surface and these may act as a carrier for blackhead protozoa.

A possible action to reduce blackhead risks is to spread a lime-based product on the range at turnaround to help destroy worm eggs. The use of salt in strategic places around the house can also help to discourage worms from entering the shed.

3. Biosecurity strategy
Biosecurity is hugely important in limiting the incidence of blackhead and every effort should be made to keep the parasite out of housing and off the range.

But the protozoa remain dormant in parasite eggs for long periods, making them extremely difficult to eliminate.

In houses, a rigorous cleaning and disinfection regime should always be implemented to ensure faeces, litter and feed that could harbour the parasite are removed.

It is good practice to ensure sheds are well maintained, as water ingress has led to blackhead outbreaks in housed turkey flocks.

Wild birds must also be kept away from housing and, if possible, should be discouraged from the range.

This is necessary to limit carrier species such as pheasants and partridges, which can shed the diseased eggs in droppings. Other wild species could bring in secondary infections that add to the severity of blackhead if it arises.

The workforce must be warned about the risks of a blackhead outbreak in a commercial flock, particularly as the wet summer in parts has created ideal conditions.

“A regime that ensures staff clean and dip boots between different parts of the site must be rigorously applied.

“Or better still, staff should be provided with specific clothing and footwear for individual sheds,” says Miss Brewer.