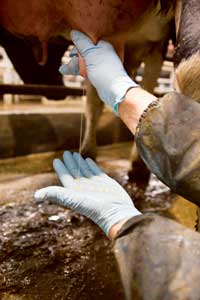 The approach to using diagnostics must change if mastitis is to be controlled. Sarah Trickett speaks to vet Andy Biggs, The Vale Vet Group, Devon, about how and when diagnostic tests should be used.

Diagnostics are all too often used in a fire-engine approach to tackling mastitis – only being used when somatic cell counts become too high or too many clinical cows appear in the herd.

But this reactive approach is not the best to take when it comes to mastitis control, says Mr Biggs.

“Diagnostic tests should be used for surveillance rather than as a reactive response to increasing mastitis problems within a herd. Diagnostics allow problem pathogens to be identified and for long-term mastitis plans to be drawn up.”

The most useful thing about identifying the most prevalent bacteria on farm is the fact it helps indicate the most likely origin for these mastitis bacteria entering the cow and can help direct changes to management to reduce that risk, says Mr Biggs.

Measure, manage, monitor – those are the three ‘M’s Mr Biggs wishes every farmer to remember when it comes to using diagnostics.

“Diagnostics shouldn’t just be used to identify what bugs are on farm, but they should also be used for pattern recognition and how bugs vary over time.

“It’s essential to know your enemy, how it behaves and how you can tweak management to deal with it. It’s then important to monitor whether management strategies in place, are working to tackle the disease,” he says.

To get an accurate picture of a mastitis problem in a herd, Mr Biggs recommends freezing a milk sample from every clinical case, but not necessarily to culture every one.

“The reason you should freeze every clinical case is because when you hit a problem such as rising cell counts, recurrent cases, treatment failures or persistent cases, you can hand over samples from more than one cow, which will help identify the problem more accurately.

“For example, if you tested samples from three cows, two could have bug A and one bug B. But when you test 15 cows you could have 10 with bug B and only five with bug A. So had you just tested those three cows it would have given an inaccurate picture of the problem on-farm,” explains Mr Biggs.

“When somatic cell counts are rising and no clinical cases are seen it indicates there is a level of sub-clinical mastitis in the herd.

“In this situation, it is worth taking samples from California Mastitis Test (CMT) -positive quarters from high-SCC cows to identify the problem pathogen and where the problem could have arisen.”

But interpretation of results is also vital as different bugs, in different samples, mean different things and just because you have found a bug, it doesn’t mean it is significant, adds Mr Biggs.

And using bacteriology results along with other tools can aid interpretation, he says. “Identification of bugs is just one part of controlling mastitis.

It is important to look at other records available such as SCCs, as these can also infer when and where problems are occurring, even before clinical cases are seen.

“Looking at when cows are becoming infected can indicate where management needs to be tweaked (see previous article on the milking machine and Week 6 for environment management).

“For example, a cow becoming infected in early lactation indicates there could be a problem with dry cow management, whereas cows infected late in lactation suggests an issue with parlour routine.”

Whether the pathogen is environmental or contagious could also indicate where the problem started, he says.

“The easiest way to bring in mastitis pathogens, such as Staph aureus and Strep agalactiae, is to buy it in. In an ideal world, before buying any cow, you should look at SCC levels from the herd of origin and ask that farm about their mastitis incidence.”

[Next week Find out how diagnostics can be used for selecting specific treatments for mastitis].

• For more on Mastering Mastitis