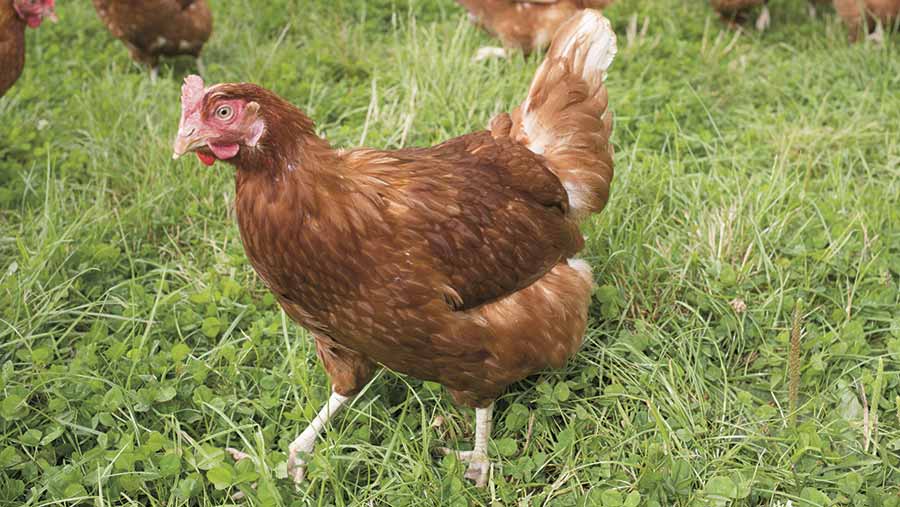 That’s according to the recent Defra-funded Farming Future desk study, a review of recent scientific reports related to keeping poultry in organic systems.

One objective of the work was to consider ways in which poultry production – separated from farm systems because of intensification – may be incorporated into a mixed organic system.

And a central conclusion is that a faster-growing bird crossed with slower-growing strains would be well placed to capitalise on the market for extensively reared poultry.

One example of this cited was genetics firm Cobb’s current work to cross a Kabir Hybrid with a Sasso type, the report said: “It is expected they will be in a strong position to supply the extensive market in the future.”

The report, published in the Institute of Organic Training and Advice Research Review, said more informed attention needed to be given to basic husbandry procedures if the welfare potential of organic systems was to be recognised across the sector.

It highlighted that that early access to pasture increased range usage and that natural shelter in the form of conifer wigwams were attractive to birds and were well used.

Different studies have opposing results in relation to escape behaviours and tonic immobility (where birds freeze after being startled).

One report recommended that popholes remain open during routine welfare inspections and feeding as traditional birds have a more extreme response to danger and are likely to crowd and suffocate.

But a separate study found that slow-growing strains of bird had a reduced period of tonic immobility, suggesting a less extreme response to danger. Animals selected for high production efficiency were more at risk for behavioural, physiological and immunological problems.

The study said outdoor and extensive production systems had specific health and disease implications, with animals selected for high production more at risk of behavioural, physiological and immunological responses.

Control of internal parasites, such as coccidiosis, was a potential problem in free-range systems that did not have feed rations containing prophylactic medications.

Once birds had matured and acquired immunity the problem reduced as long as hygiene standards were maintained, stocking densities were not too high and site rotation was practised.

The research found that breeding for general disease purposes was possible but complex. Possibilities in the field of developing the general immune system by bringing young chicks into well-controlled contact with micro-organisms – the hygiene theory – should be further developed, it argued.

Example of the hygiene theory include administering gut flora to one-day-old chicks, keeping young hens in contact with healthy older hens, providing compost, access to a free-range area at a young age along with feeding microbial fermented feeds.

Unsurprisingly, the report found that outdoor flocks were at risk from diseases spread by wild birds, including fowl cholera, Newcastle disease, salmonella and campylobacter.

Feeding broilers an organic diet that hits nutrition targets can be a challenge. The report offers the following pointers.