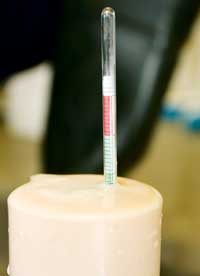 Colostrum management is the linchpin to the success of any cattle producer, yet all too often quality can fall below standard.

When this is the case, producers can be faced with an uphill struggle to maximise calf health. This was something realised by dairy farmer, Rob Clapp, West Town House, Somerset, following an out break of cryptospirosis among his calves.

“With a herd of 487 Holsteins, calving all year round, calf management is always high on the priorities list,” says Mr Clapp.

“We have always recognised the importance of colostrum management and this is reflected in our calf management routine – we always ensure calves are tubed with two litres of colostrum as soon as they are born.”

Calves then remain with the dam for 24 hours and are tubed again once they are taken off the cow. They then move to being fed two litres twice a day for five days, progressing to ad-lib feeding after this.

Despite this, the farm still had problems with calf scours which peaked with a particularly bad episode of cryptospirosis, says Harold Batstone, who is in charge of calf rearing.

“We managed to break the cycle by routinely dosing with an anti cryptospirosis drug and steam cleaning pens between batches,” he says.

However, even with these improvements, scouring was still a problem, Mr Clapp continues. “I knew calves were defiantly getting colostrum, but blood samples showed 60% of calves had inadequate gamma globulin levels, the question was, why?” 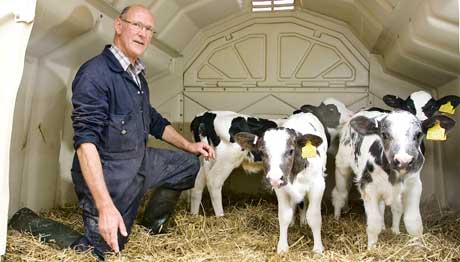 “Prevention is better than a cure and colostrum is your cheapest and best way to prevent illness in calves,” says Mr Aitkin. “The trouble is quality can vary considerably, particularly in high yielding cows where colostrum can be dilute.”

The colostrum meter turned out to be a real eye-opener, says Mr Batstone. “The physical appearance of colostrum can be very deceiving – some colostrum we would have previously viewed as being good, actually proved to be below standard.”

And this is despite only using colostrum from the oldest calved cow to try and maximise quality.

“The reality was, although calves were getting enough colostrum, it was of such low quality, that it had little effect on boosting calf health.”

The meter is basically a hydrometer which responds to the density of colostrum.

“It is incredibly easy to use. We pour off a sample of colostrum into a cylinder and float the meter in it. The red, yellow and green lines on the instrument indicate whether the colostrum is of high or low quality.”

According to Mr Clapp, this simple tool has allowed strategic placement of colostrum. “We are still being presented with the same milk we have always had, but we are now able to make informed decisions about what we should use – without spending any more money.”

Not only have pneumonia and cryptospirosis levels significantly reduced, but growth rates have also increased.

“When considering the financial value of heifers down the line, getting the foundations right is essential,” he says. “These simple changes have allowed us to produce fitter, healthier calves.”