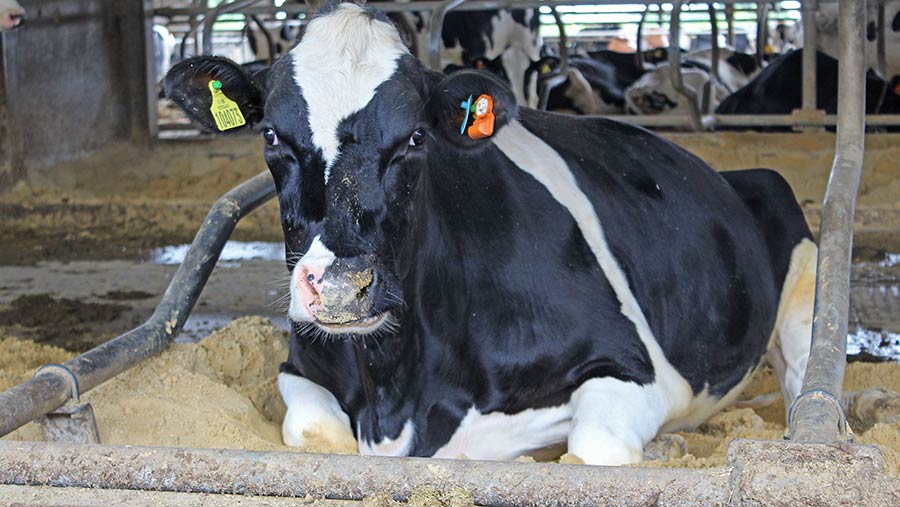 Since 2016 the team at Stowell Farms in Wiltshire has adopted a multi-pronged approach to improving herd health.

The strategy has ultimately led to better performance, less disease and reduced antibiotic use.

Their efforts have paid off, with mastitis down by more than half and lameness by two-thirds. 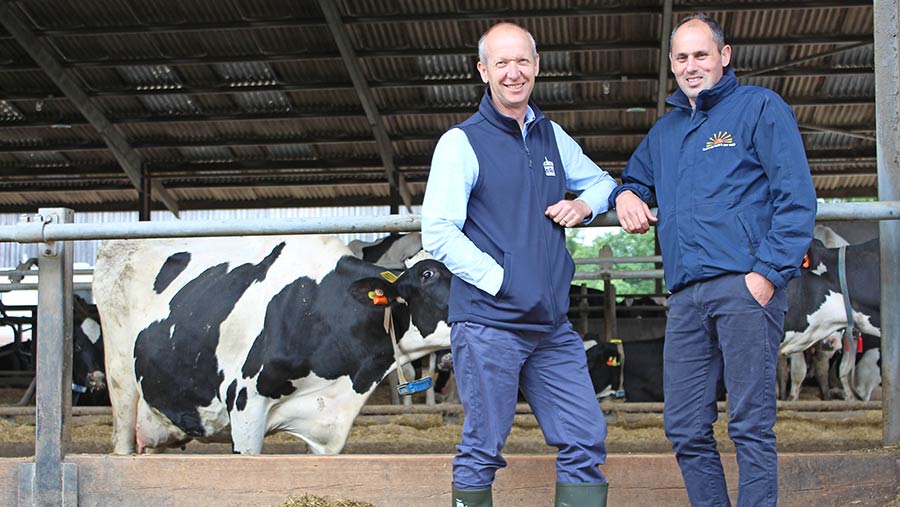 This has facilitated a 50% drop in antibiotic use and a 0.5p/l reduction in vet med spend. Fresh cow health and fertility have also improved (see table).

Better health, coupled with improved genetics and moving to three-times-a-day milking, has also aided a yield increase of 1,750kg a cow a year.

Mr Moore’s recognition that health and fresh cow performance were not where they should be spurred on the changes.

The fact that his new managerial role coincided with a period of low milk price also underlined the need for change at a time when the farm owners were questioning the dairy’s future.

As a result, Mr Moore and Mr Gordon worked to establish the “big three” areas for attention, identified as fertility, lameness and mastitis.

They have implemented the following changes, which have made all the difference.

Putting milking protocols in place and ensuring they were adhered to was one of the first things Mr Moore did, as well as changing the type of milk liner used to suit the herd.

Previously cows would have been pre-dipped and cupped-on immediately. Now, there is a 60-90 second gap before they are wiped, following stripping and pre-dipping.

There is then another 10-15 second gap before they are cupped-on. This has proved the best procedure to optimise milk let-down in this herd.

High cell count cows also get a yellow band on their leg and their cluster is dipped in peracetic acid.

The amount of straw used on top of mattresses has been increased to improve udder cleanliness, while the cubicles have been lowered to help improve lying times, which has also helped foot health.

The brisket board in the milking heifer group has also been adjusted to avoid smaller heifers lying too far in and getting dirty udders.

Avoiding over-diagnosis and over-treatment of mastitis has helped promote responsible use of antibiotics. This takes into account the fact some cows will have clots in their fore milk, but won’t need treating with antibiotics, and some will self cure.

“In the past, we’ve been guilty of chucking antibiotics at the cow,” comments Mr Moore. “We work on the 10 strip rule. If there’s still a lot of clots after 10 strips, we look to treat.”

This means, if clots are present after 10 strips, and the cow is showing no other symptoms such as being sick or having a swollen quarter, she will be treated with non steroidal anti-inflammatories.

She will then be reassessed at the next milking. By picking up cows early and treating in such a way, it is more likely she will recover and not require antibiotics.

The herd is now mobility scored fortnightly, with the aim of picking up score 2 cows early, and treating them before they develop into chronic, score 3 cows.

With white line disease and ulcers the main issues on farm, for the first six months this involved trimming or applying blocks to around 10 cows/day to get on top of the problem.

Now levels have dropped considerably. Whereas previously not every cow would have received a routine trim every year, now every animal is trimmed at 100 days in milk and drying off. 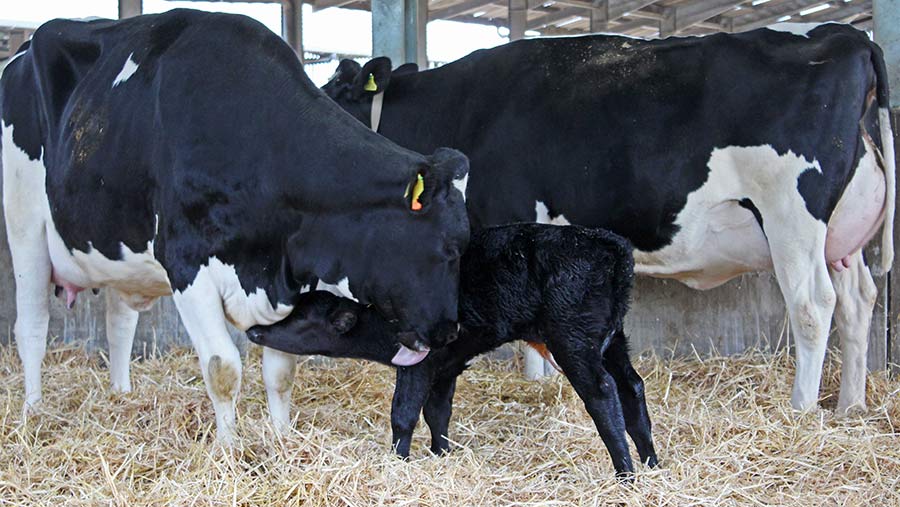 With a view to getting cows off to a good start post-calving so they go on to be fertile, productive animals, a loose straw transition yard has been converted into 100 deep-bed sand cubicles (50 for pre-calvers and 50 for fresh calvers).

This has an adjoining straw calving yard. A low stocking rate of about 40 cows per 50 cubicles reduces stress.

Cows at risk of ketosis (e.g. fat or twin-bearing animals) will also receive a monensin bolus to prevent problems.

Fresh cows are managed in a dedicated group where they remain for three weeks after calving. In the past they would have been kept on a straw yard with sick animals for about seven days.

Fresh cow protocols are also followed, including temperature checks and blood ketone monitoring so issues are picked up and treated promptly.

In the past, the team were guilty of giving cows multiple chances to get pregnant and holding on to repeat mastitis offenders. Today, the aim is to cull “in a proactive way” so that culls are identified before they are bred.

Cows will now not be served after 220 days in milk. The 100-day cull rate has subsequently reduced.

Changing the transition straw yard to sand cubicles has enabled heifers to be introduced to cubicles three weeks prior to calving, which has aided lying times when they enter the milking herd, helping foot and udder health.

The aim is to build a 250-cow cubicle shed, which will allow bulling heifers to be cubicle trained. 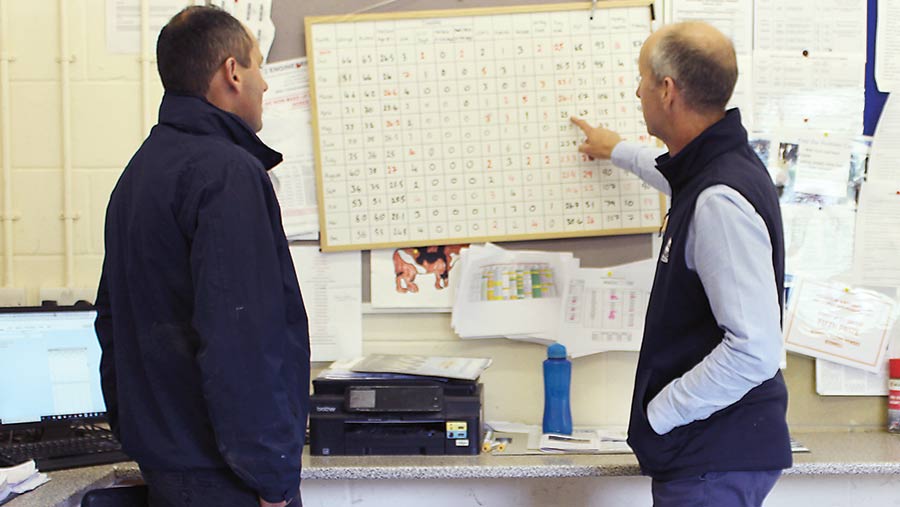 A smart ear tag system was installed about six month ago to help health and heat detection further.

The tags automatically monitor rumination, body temperature, activity and eating – with any abnormalities flagged up to the team.

This will help pick up sick cows early, allowing prompt intervention with anti-inflammatories where appropriate.

This should further reduce antibiotic use.

Mr Moore believes the disease reductions have benefited the farm financially. Quoting an industry-recognised cost of £220 a case of mastitis and an original incidence of 52%, he says the reductions in mastitis incidence alone add up to a significant saving.

Referencing what lessons he’s learned when it comes to optimising cow health, he says:

“It’s about being proactive and putting protocols in place that are adhered to, involving the team to make them feel a part of what we’re trying to achieve, and having a good relationship with the vet and outside individuals that can aid the business.