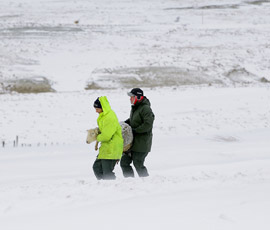 Farm leaders are in emergency talks amid fears that thousands of sheep have perished in snow drifts.

It comes as companies responsible for collecting fallen stock are being asked to offer bulk discounts for the disposal of dead animals.

Similar talks two years ago resulted in a £200,000 emergency aid package for Scottish farmers who lost animals during the 2009-2010 winter.

During that winter, harsh weather saw a 40% increase in the numbers of dead sheep that were picked up by knackerers and renderers compared to the previous winter.

Scottish sheep farmer Morag Murchie is one of many farmers facing up to losses.

She said Balnacoole Farm, Brodick, on the Isle of Arran, had been cut off from power since Tuesday 19 March.

And the snow had come at the worst time of year during the busy lambing period, she added.

“I started off with 80 ewes and I’m losing them fast. I have lost eight ewes and 12 lambs. No doubt there will be more,” she said.

By Tuesday (26 March), Mrs Murchie was down to her last silage bale and had resorted to feeding sheep with blocks of Crystalyx high energy supplements to keep them alive.

“The sheep are stuck in the snow and I’m struggling to get near them. The gates are out of site with snow drifts.”
Morag Murchie

“The sheep are stuck in the snow and I’m struggling to get near them. The gates are out of site with snow drifts,” she added.

Meanwhile, farmers in Northern Ireland, North Wales, Shropshire, Cumbria, Yorkshire and other northern regions in England, were struggling to get through the heavy snow to feed their livestock.

An RAF Chinook helicopter was scrambled from Hampshire on Tuesday morning (26 March) to make food drops to animals stranded in the snow in Northern Ireland.

Agriculture minister Michelle O’Neill said the helicopter was focusing its fodder drops on the worst hit area around the Glens of Antrim where thousands of animals are trapped under 18ft snow drifts.

Mrs O’Neill said she would be exploring the issue of hardship payments for farmers and support for disposal of fallen stock at an Executive meeting on Thursday (28 March). 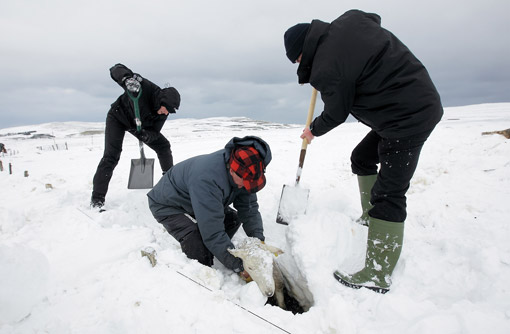 The Manx National Farmers’ Union said farmers on the Isle of Man were facing “catastrophic losses”.

General secretary Belinda Leach said: “It’s too early to assess losses in terms of stock numbers, but there is talk of cattle literally frozen to death on the ground after being buried under 15ft of snow.

“We have got six sheds collapsed due to the weight of the snow with stock killed inside.”

Mrs Leach said there were many in-lamb ewes lost on the hills and farmers, helped by members of the public, had been digging funnels in the snow to get to them.

“There is talk of horrendous losses, but they are finding pockets of livestock,” she added.

Following the 2010 disaster, the NFSCo amended its prices to enable collectors to offer a “10+ price” for the collection of ten sheep or more.

NFSCo chairman Michael Seals has written to collectors, encouraging them to submit prices to assist farmers who have been particularly badly affected this time around.

This data will then be released to Scotland, Wales and Northern Ireland as well as industry organisations to enable comparisons with previous years.

The Prince’s Countryside Fund has warned that the cold snap will add to the economic woes of farmers. It has authorised £219,000 in emergency aid to help farmers battling a forage shortage – caused by the bad weather – and having to buy in expensive feed.