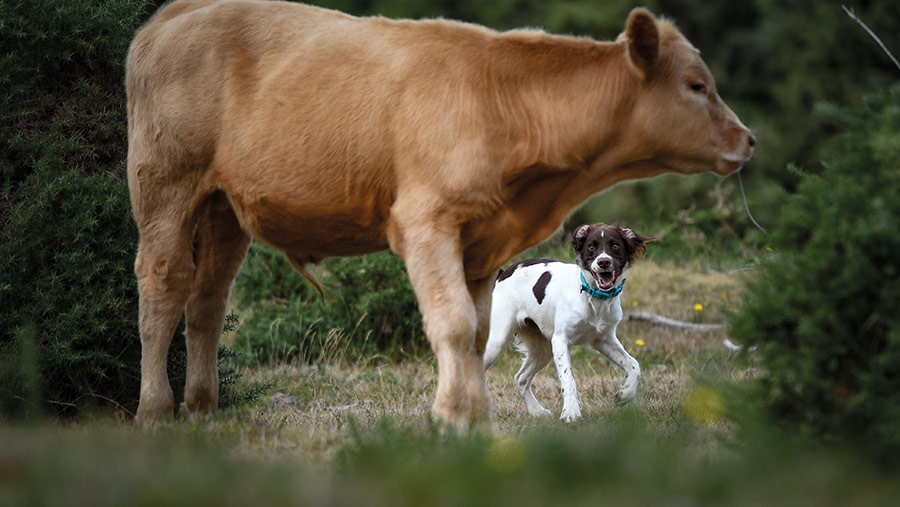 A farmer has launched a national campaign urging the public to pick up their dog mess after almost half his herd of cattle that graze in the New Forest lost their calves due to neospora infection.

Commoner Tom Gould says he wants people to understand the devastation dog mess can cause after 18 of the 38 cows he turned out on the national park in spring last year lost their calves.

Blood tests revealed all the Hereford-cross cattle had been exposed to the parasite neospora, which also caused a few cows to have deformed calves.

“We scanned the whole lot in-calf on the second week of March and turned them out in April and when they came back in, only half of them had calved.

“When it is that slow, you start to look for a reason,” Mr Gould told Farmers Weekly.

The cattle graze in Wilverley and Longslade, which are said to be some of the busiest parts of the New Forest for dog walkers.

A recent six-week investigation by the New Forest Association found that litter and dog mess is prevalent across much of the forest, with a combined total of nearly 1,100 reports in that period.

“If you go round the car parks, it is a sea of dog mess. If people just picked it up and took it home with them, even half the people, it would be doing us a massive favour,” said Mr Gould.

“All I am trying to do is raise awareness. It hasn’t just been a problem for me, it is other commoners too.”

Mr Gould said he would like to see more signs telling people to pick up dog faeces and more bins in the forest.

He has shared his story widely with the national press in a bid to raise public awareness.

Mr Gould rents land near Ringwood, where the cows currently are on stubble turnips.

He is allowed to graze his cattle in the New Forest so all his fields can be used for silage in the summer.

“We take our cattle all the way through and finish them for the local farm shop.

“We can’t just buy in replacements because of the restrictions we are under for the New Forest – we have to double test everything for TB.

“We are going to have to cull quite heavily within the herd because we will have vertical transmission from mother to daughter.”

Alex Crook, from Cedar Farm Vets in Ringwood, called for industry groups to replicate the strong research and work currently carried out around bovine viral diarrhoea and infectious bovine rhinotracheitis, to tackle neospora.

“More needs to be done on neospora. There is no vaccine and we know that the cattle are infected with it for life, so it is a nightmare.

“The figures you read are 95% transmission from dam to calf so realistically now, he [Mr Gould] is going to have to breed now to terminal beef,” Dr Crook told Farmers Weekly.

“Those cows that have got it are five to seven times more likely to abort in the future as well.”